A new devlog today!, second overall, and second this October, lemme see... I do plan to get another one this month on the 27th! Right after my birthday! Today we will be talking a bit about Town/Shop Management, Some menu changes, World/Shop Crest's, Customer behaviour, World Map and the Clock, so let's get into it. 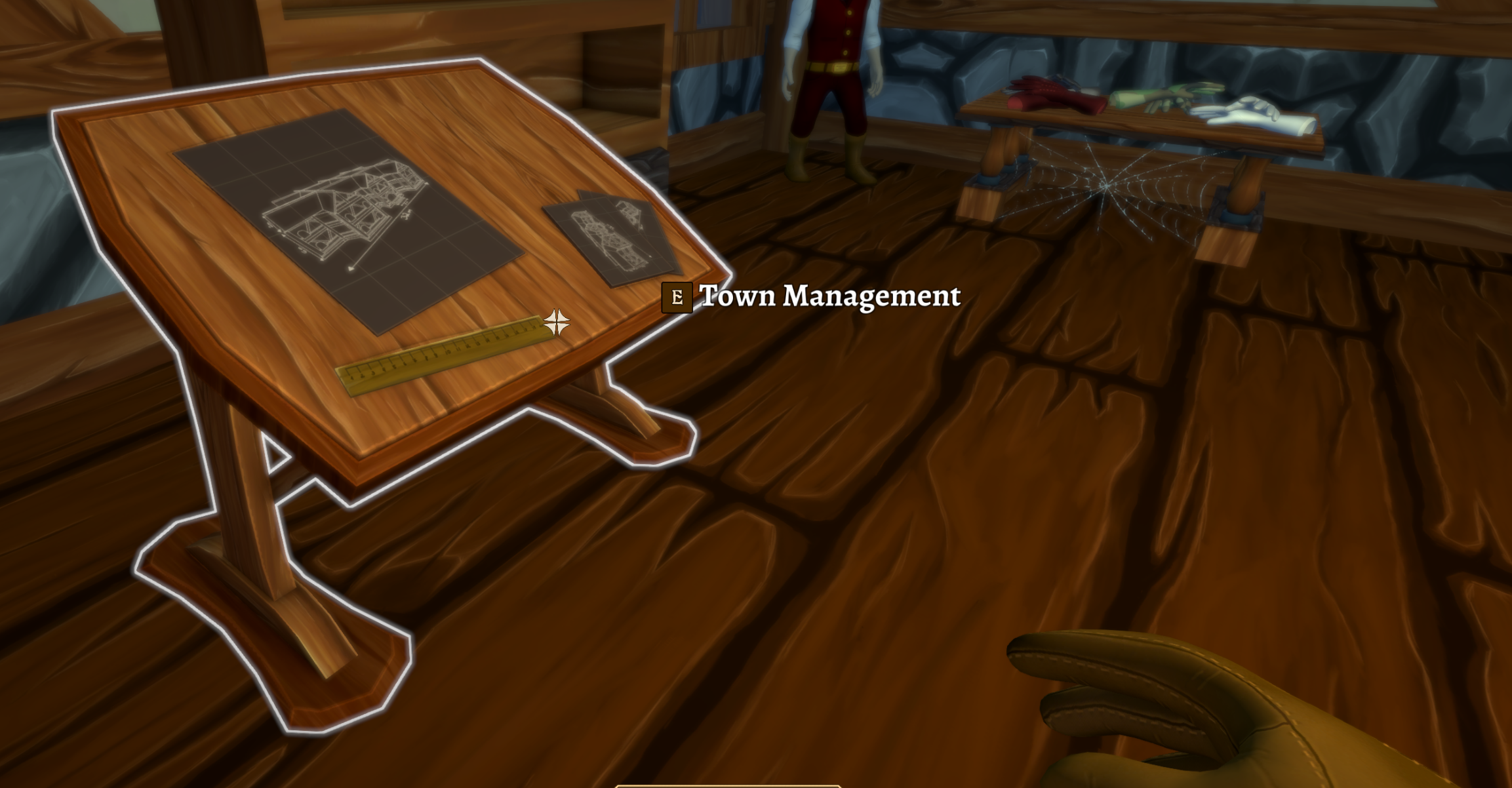 Your management house in town has a Desk used to plan out your Town and Upgrade the shop. The UI that pops up shows statistics about your Town and Shop, keep in mind that this is yet to be finished as we want to include far more statistics than they are here, a few displayed are not even implemented as we do not like to show anything that is not working yet. But rest assured it will, and you the community can offer even what kind of stats to showcase on this UI. 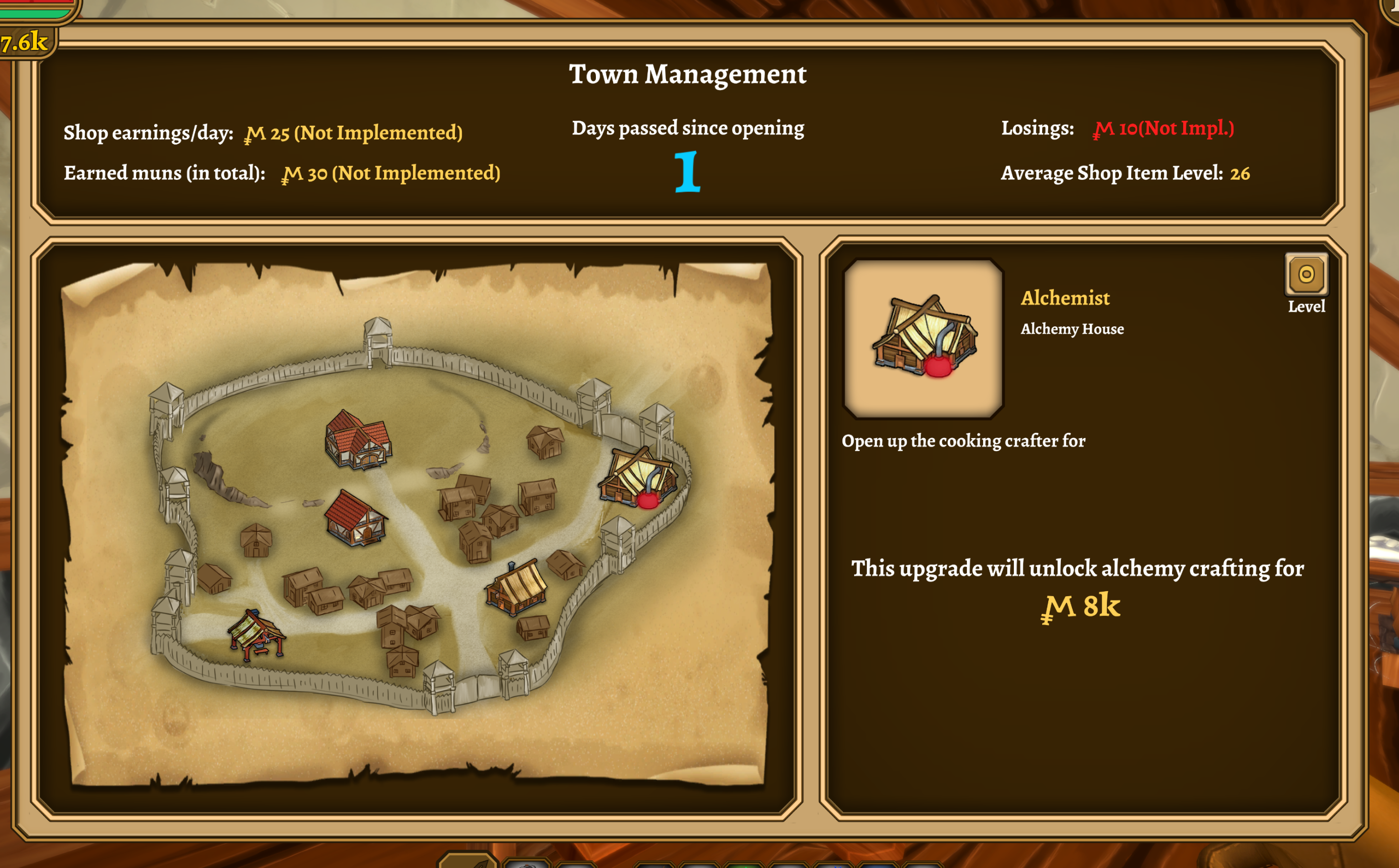 Small Rundown of the top image took from the game has 3 stats that are not yet implemented, but an example of what kind of stats can be shown real time, the 2 stats that already are working are days passes and an average item level of all items that are for sale in the shop. When you reach the required prerequisites, you will be able to upgrade the whole town to have more unique npc vendors, and a new look, with additional bonuses. From this image you can see that you can select an Alchemist House, Cooking House, Blacksmiths House, Management House and of course The Shop. Each building that can be upgraded in your town will have a Level and their own upgrades that will be revealed once clicked. Such as increasing crafting yield for the crafters, or even upgrade their own houses to allow additional features. We are still discussing the Management house upgrades. All upgrades should be presented visually in the world as well, more on that later.

Once clicked on the shop Icon, you get a layout of all your wings, and the cost of it when hovering over. Each next upgrade costs more - so plan ahead. The new wing will be opened in the world, and as well will be represented on your town UI. 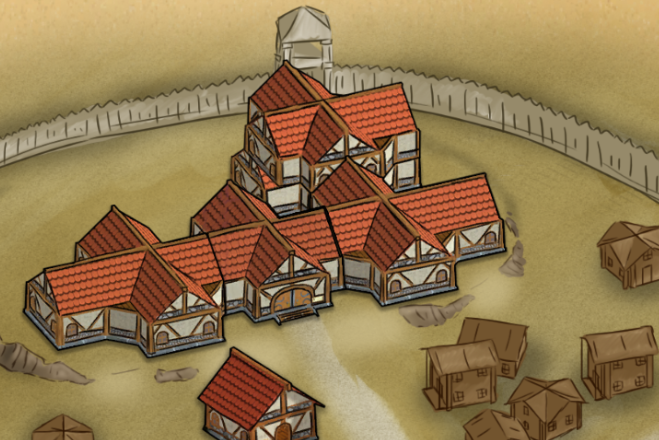 We already talked about the crafting feature in the last Dev Log, we will go back to it when we finished creating the other 2 crafters - as their houses are already done, we need to voice them, create their outfits, and figure out their names! Hopefully by then we will show some Town Management UI upgrades panel for those crafters too!

We are always iterating the Main menu look, this gif shows that the Main Menu animates via movement trough the village zone, and a rapid day/night cycle freature showcasing with windows lighting up. Each build during Early Access will have a "Notes from the Dev's" with important information or a general changelog. As well the main menu let's you modify visual settings, rebind keys and choose Single Player or Multiplayer, includes a character creator, world creator, and I do hope it will have far more than it has now. The lower part like we discussed about Steam last time, shows your Steam name and Avatar - if you do not see this then connection to Steam failed or you will be playing the game on other platforms apart Steam. 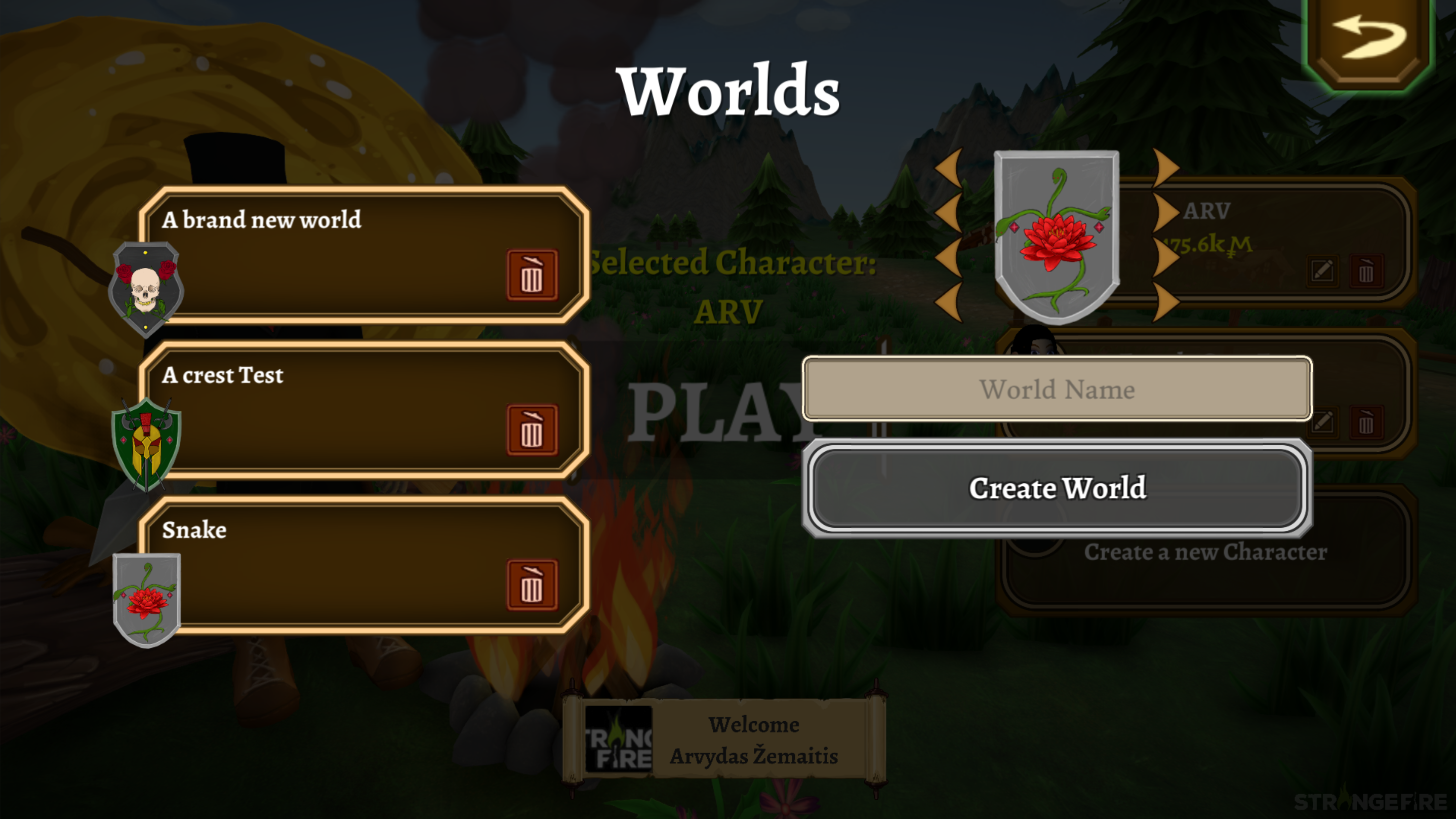 Do not mind the UI, its just for functionality, and will be made spiffy by our UI Artists. Each world save you create will have it's own Crest, that will be showcased around the world and UI elements in game, another piece of customisation for you guys to make it feel like your own world! More designs will be available as time goes on.

Something that does not have visual representation but is more code wise, tho I still want to talk about it and progress on it. The eternal struggle back in SK Original, was Customer navigation within closed spaces. because we allow players to build dynamic props/objects in the shop it makes the navigation mesh even more dynamic and small in places, customers start pushing each other, for now we are solving this by disabling customer collision between themselves, but for Quality reasons we will go back to it when time allows. As well we saw hordes of customers in SK2 go towards the shop once it is open and just a single pedestal is placed. Now there is more control over the amount of customers going towards the shop. Depending on how many items you have on display will say how many customers are going to go to your shop at any given time, so you can control the traffic in a sense, more "Crowd Control" will be introduced via Skills and Upgrades. 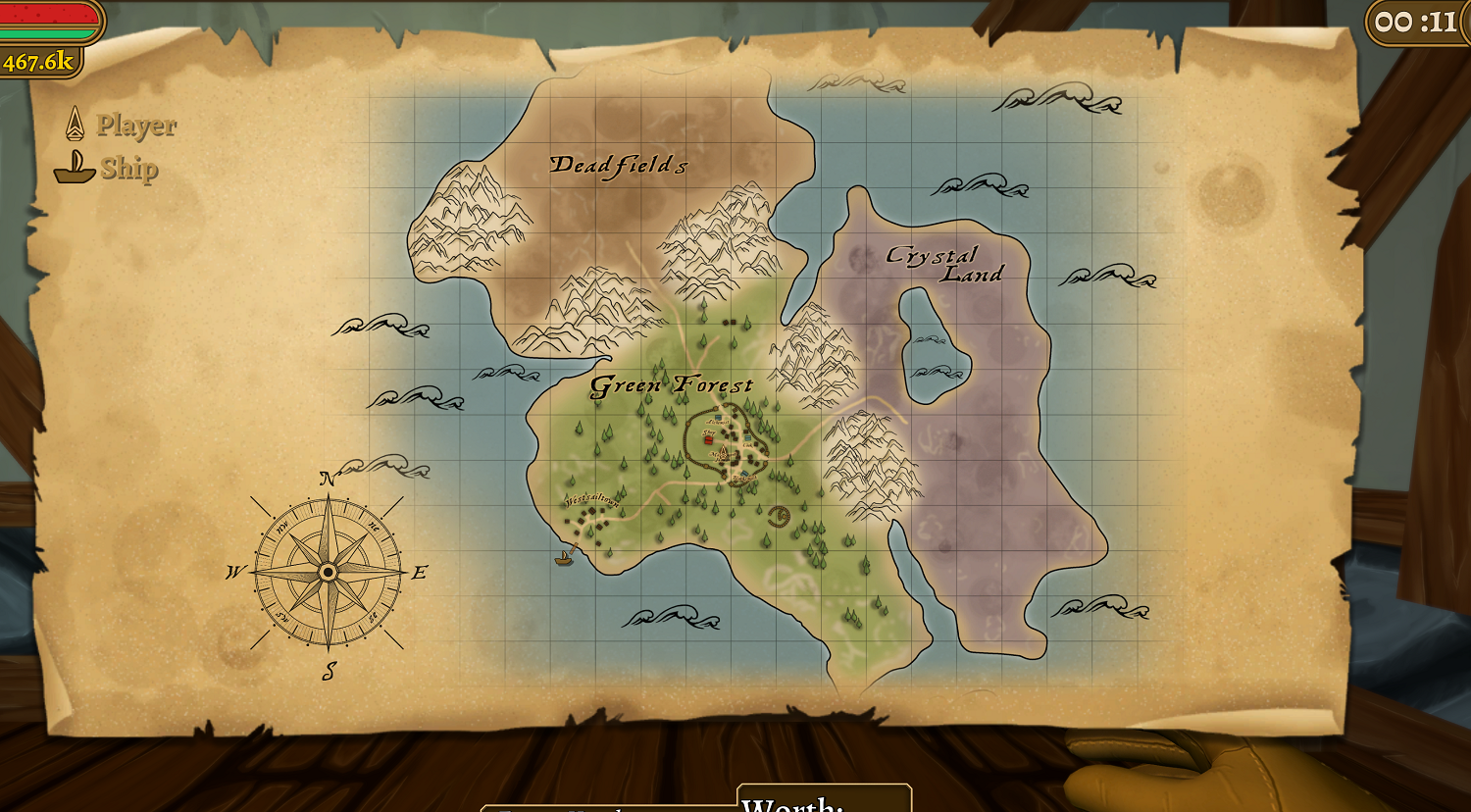 Because Shoppe Keep 2 has a semi open world available and exploration will be a choice for the players, here we have a world map where you can track your and other player location, as well as some other dynamic objects for example a Ship that will be used for merchant feature and travelling from port to port. Additional landmarks will be shown on the map once they are revealed by visiting or as a quest reward. 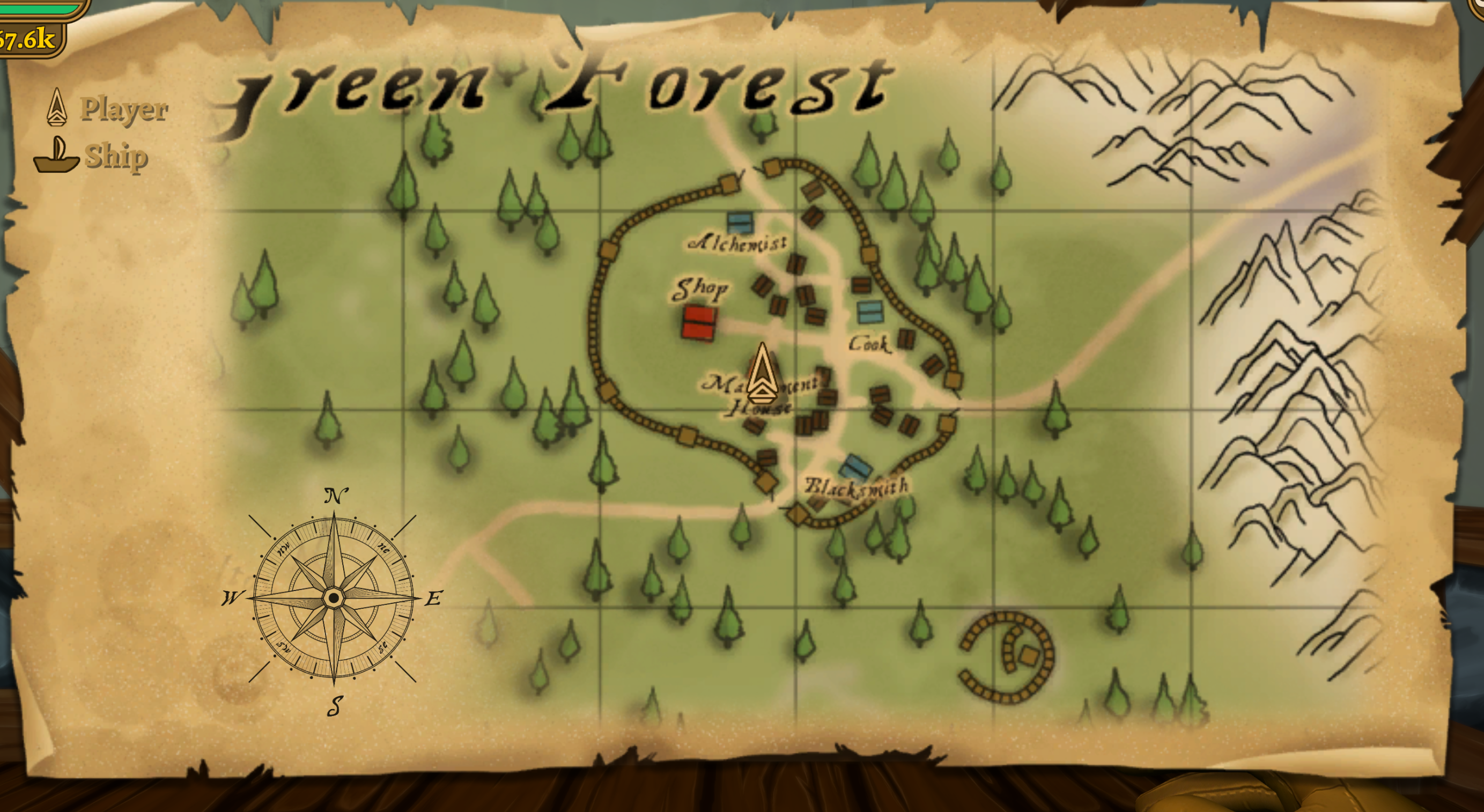 Of course you will be able to zoom in, here is an example of me spending quality time with Sir Poshington in the Management house. You won't believe how much time was spent to make sure you are pinpointed and represented on the map exactly where you are! And we are damn proud!

Something that is not a vital Game feature, but a nice detail, any and all Analogue clocks in the world will represent the actual Time of the world, in case you do not want to look to the top right for a numeric digital time, your choice!

This is all for now, far more stuff are in the game right now, but we are pacing ourselves, and will reveal as much as possible and as soon as possible, for example we are compiling a few features that we do not talk about, but want to include in a single grand post.