If you missed the Alpha gameplay video, do not worry. More videos are on the way!

A couple weeks ago, we announced that we would be releasing our first in game video of our Alpha to a small portion of the community. The results of the turn out were great. About 40 - 50 people were in the chat waiting for the video at the right time, and more than 15 - 20 came into the chat throughout the day. Since the announcement, over 200 additional members have joined the Steam group! Expect more future exclusive announcements to made in the Steam group. Thanks to everyone who showed up! We hope you enjoyed the first look at SHIFT.

In case you missed the Alpha video screening last week, we have good news for you! Over the next few weeks, we will be publicly releasing 3 new in game videos on ModDB. We have been keeping quiet on our work but to our (pleasant) surprise, the community voted SHIFT into the Top 100! I find it only fitting that we give back something special for your support.

The videos will include the following:

This will be a quick look at online play with No Lag (even up to 180 ping, the game is playable). It will be demonstrating the first build of the multiplayer version of SHIFT.

This will be a sneak preview of one of the Story mode levels that we will be racing on with AI. There will also include a choreographed scene which introduces one of our very own voice actors!

Early development of the city level

This video will be similar to the Alpha screening, however this time there will be no commentary audio. Also, picking up right where the last Alpha video left off, there will be the addition of the finished HUD, driving of the 240SX, and AI on the Circuit track. 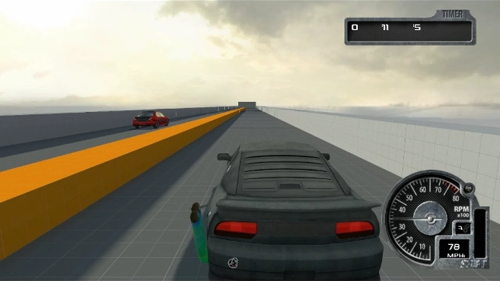 Alpha Video - To be continued?
Comments

Awesome! so will you be using hl2 or orange box engine?

According to the ModDB profile summary: "Requires a valid Steam account with Half-Life 2: Episode 1"
So I'm guessing it's the Ep1 version.

that sucks then >.<... well don't take it too seriously, but come on, EP2 is so much better for outdoor graphics!

Doesnt really matter what version of the engine they use, it depends on how good they make their resources =)

Awesome news. Congrats to making it to Top 100 you guys deserve it.

Wicked update! Looking forward to release, will you be able to play with ai and other players in mp at the same time?

Damn. I forget about video ><

Yay. I completely missed the alpha video. I was so mad. Now I'm happy again. :D

Looks like the mod is going to be a mod after all!

You know… the source engine was never designed for on the spot level streaming… I'll be interested how you get rid of the whole loading pause thing...

awesome!! thanks for being kind and showing some videos of in game!

Anyway,like the progress, looking forward to it.

keep it going guys, shift is the only mod im really looking forward to.

I was about an hour or two late for the alpha video, glad you're showing some more gameplay videos.

I know who the faceposer is...

2nd pic: Oh nice, the exhaust was buggy in the alpha vid. BTW, I hope I won't miss any vid. Will these be private or public?

Cannot wait for the videos to be viewable, keep it up like that.