A larger-than-usual update covering our work on the 4 original BFME factions, the reworking of the upgrade system, and a cool bonus.

Posted by MathijsRevora on Dec 6th, 2014 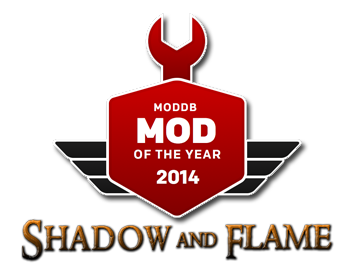 Seeing as we're getting into that good old non-denominational holiday spirit (plus the MOTY awards!), we thought we'd put together a neat update for you all.
Over the last couple of of months we've been working dilligently on three things: the Eriador faction, creating new art for the original factions, and overhauling and expanding vanilla BFME gameplay aspects. We'll be showcasing parts of the latter two today. We hope you'll give us a vote in the MOTY awards!

We're not only redoing original faction art and adding some new units and heroes. Part of the overhaul is also changing the BFME upgrade system. Heavy Armor will come with a movement speed penalty, Forged Blades will not deal additional damage to structures, and Flaming Arrows are changed completely.

We wish you all happy holidays, and don't forget to vote for us!
~ The Shadow and Flame Team

You dont need to remind us to vote. hehehe
This mod is just getting better with every update, i cant wait to play the next version.