PsyBall is a psychedelic arcade game with fast and hardcore gameplay. It has acid minimalist graphic.

First i'm sorry, that i so late started to post about my new game. This game was planned for one of game jams, but then i leave this game. Now i want to finish it and release on android as my debut. This game is nearly done and i'm going to post playable demo in week.

Firstly i added shaders. There is simple radial blur, but this made game a lot juicer and added psychedelic feel. Also i reworked game background, in the past it was simple random color, but now it is changing gradient. There is also a new sprite for slopes, now it is single slope but resizeable. How game looked before reworking can be seen at static image. One funny moment: if set shader power upward, or just hit walls to fast shader give interesting 3d-like effect. I thought to add bonus game mode, with shaders set to higher effect.

But there is small problem with this shaders. Someone find them too bright and disorient. And some android device cannot handle shader and give too small fps, so i added opportunity to shut down them in settings.

Also you can see, how game looked like before: 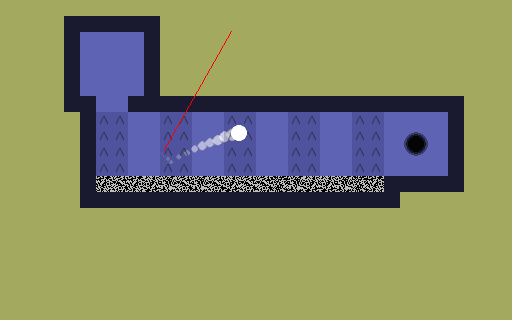 Secondary, i added sounds and music to game. I used sfxr for sound. But music was written by my friend. I'll give him creddits in game.

Now game has 45 levels. Each level have own idea, there isn't repeats or similar levels. I wnated to make more levels, but it's hard without adding new game elements. I decided to add more gameplay elements later, if i'll see, that people are interested in my game.

Now i'm going to add menu and other interface elements, i dont like this side of work, but it is needed. Game will be ready soon.