The fourth sample preview of both new and uniqe start models and battle maps. DCI: Last Alliance is a Third Age: Total War submod that take the game to the late Second Age.

For previous settlement previews, browse the Articles. For larger images, click on the images. 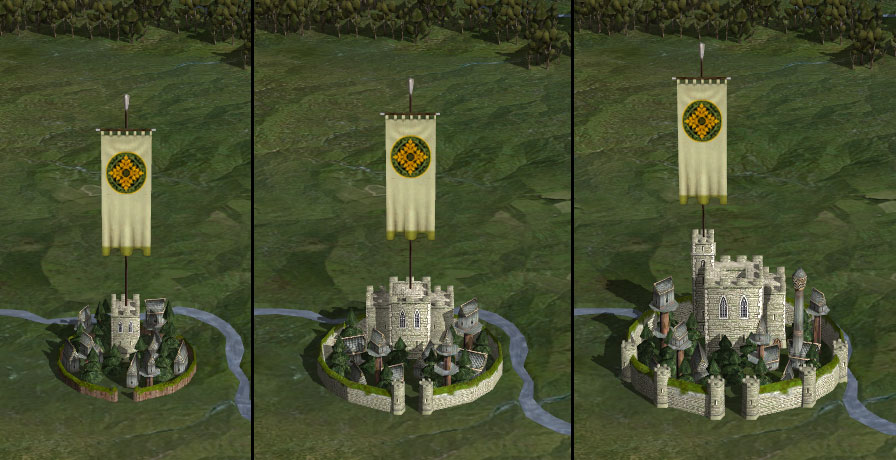 Umbar
(Nevermind the pink roads, they won't be that way in the mod.) 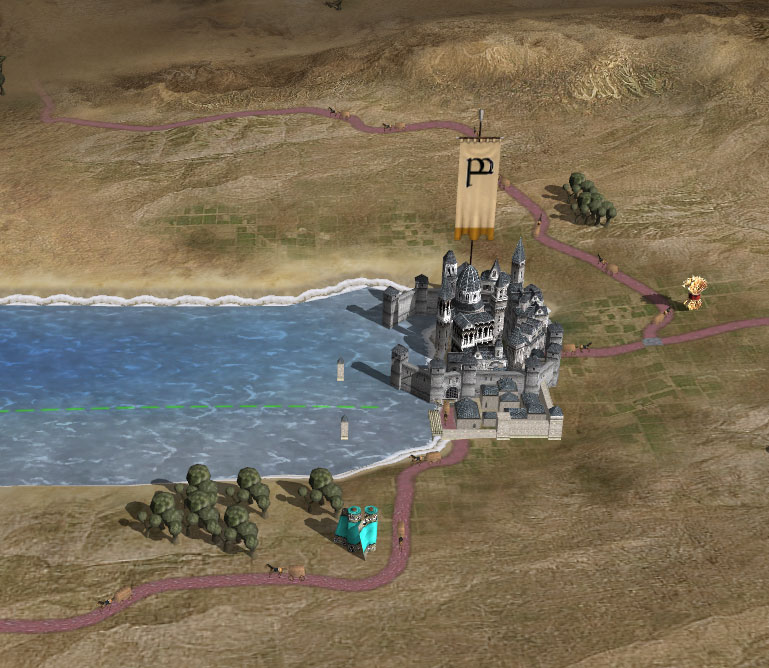 Dunharrow
Also seen here is the Stone of Erech. 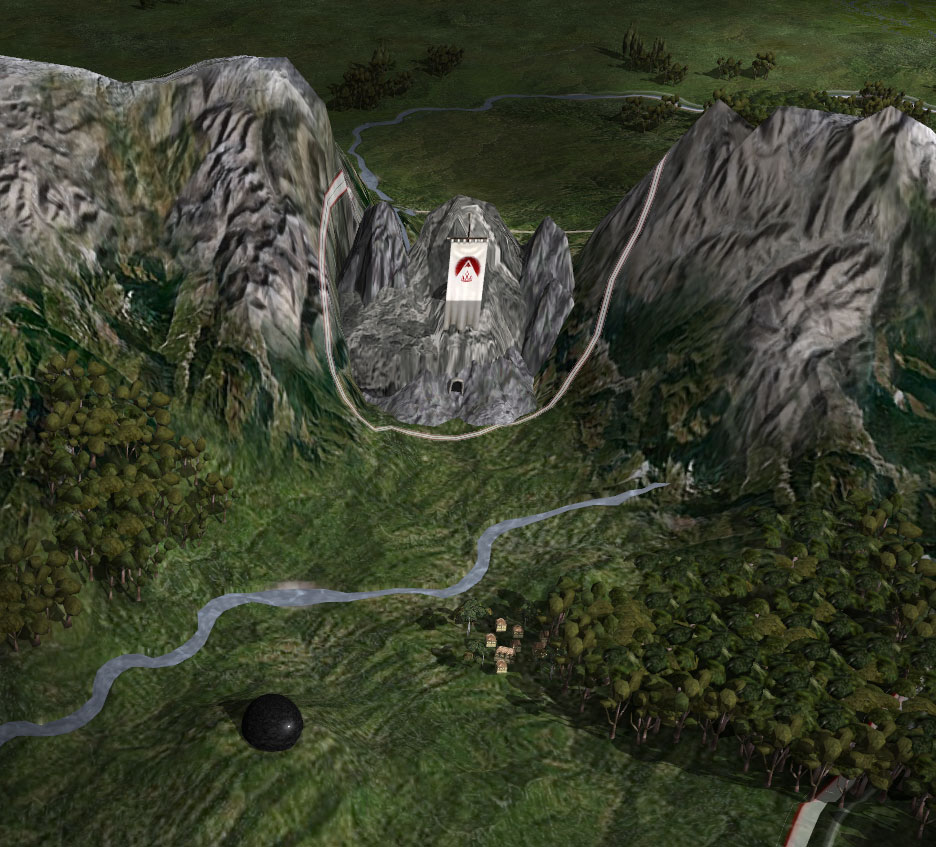 Goblin Town
As the battle map is inside a mountain (Leo's Goblin Town custom settlement), so now also is its strat map model. 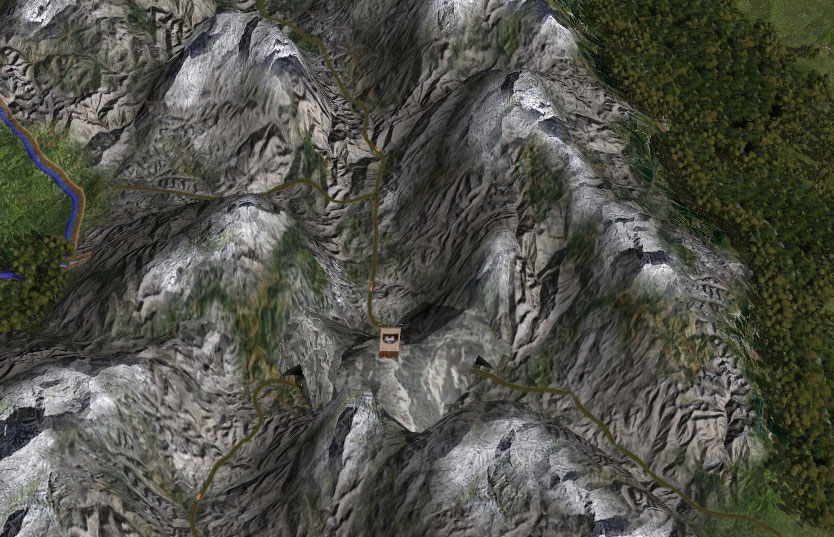 Mt Doom
Retextured and the addition of the entrance to Sammath Naur - the "Chambers of Fire" - where the Ring must be taken to be destroyed (on the northeast shoulder of Mt Doom).
Also seen here is the Eye-less Barad-dur. 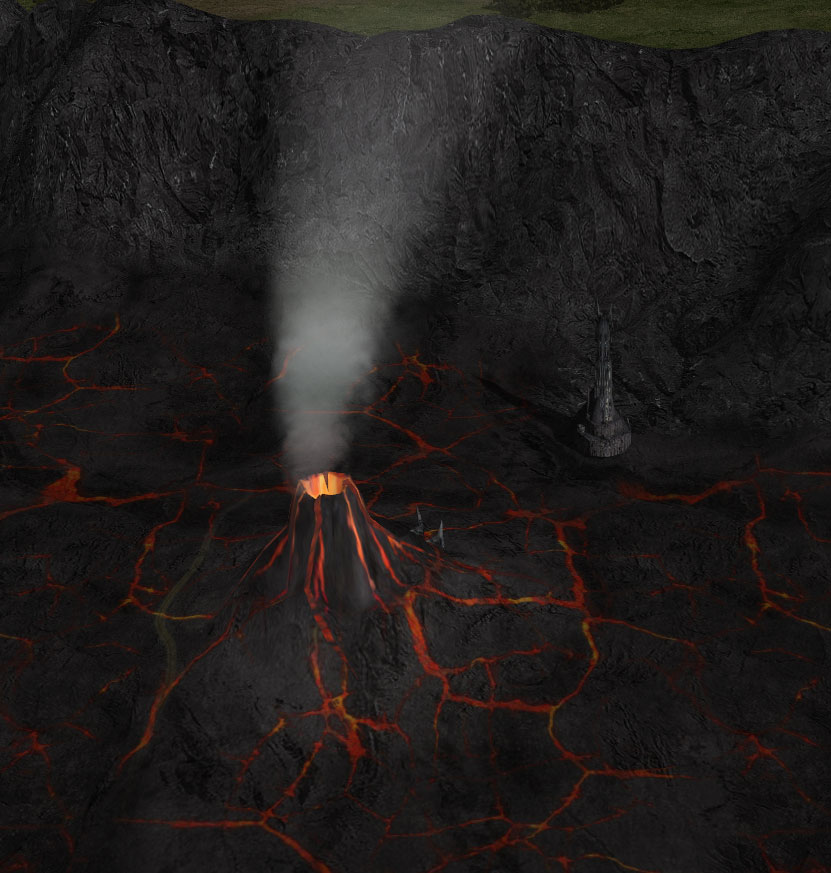 A castle, and an unusual one at that; this is Leo's Dunharrow with some additions.

A gate leads to the castle proper within the mountain, containing the living quarters and other structures that a castle requires. (In battle this cannot be entered and its internals cannot be seen, just as normal keeps in castles cannot.)

Outside are more structures: bowyer, garrison quarters, stables, etc., depending on what buildings are currently constructed here.

So this is a castle mostly hidden from view within the mountain rock. 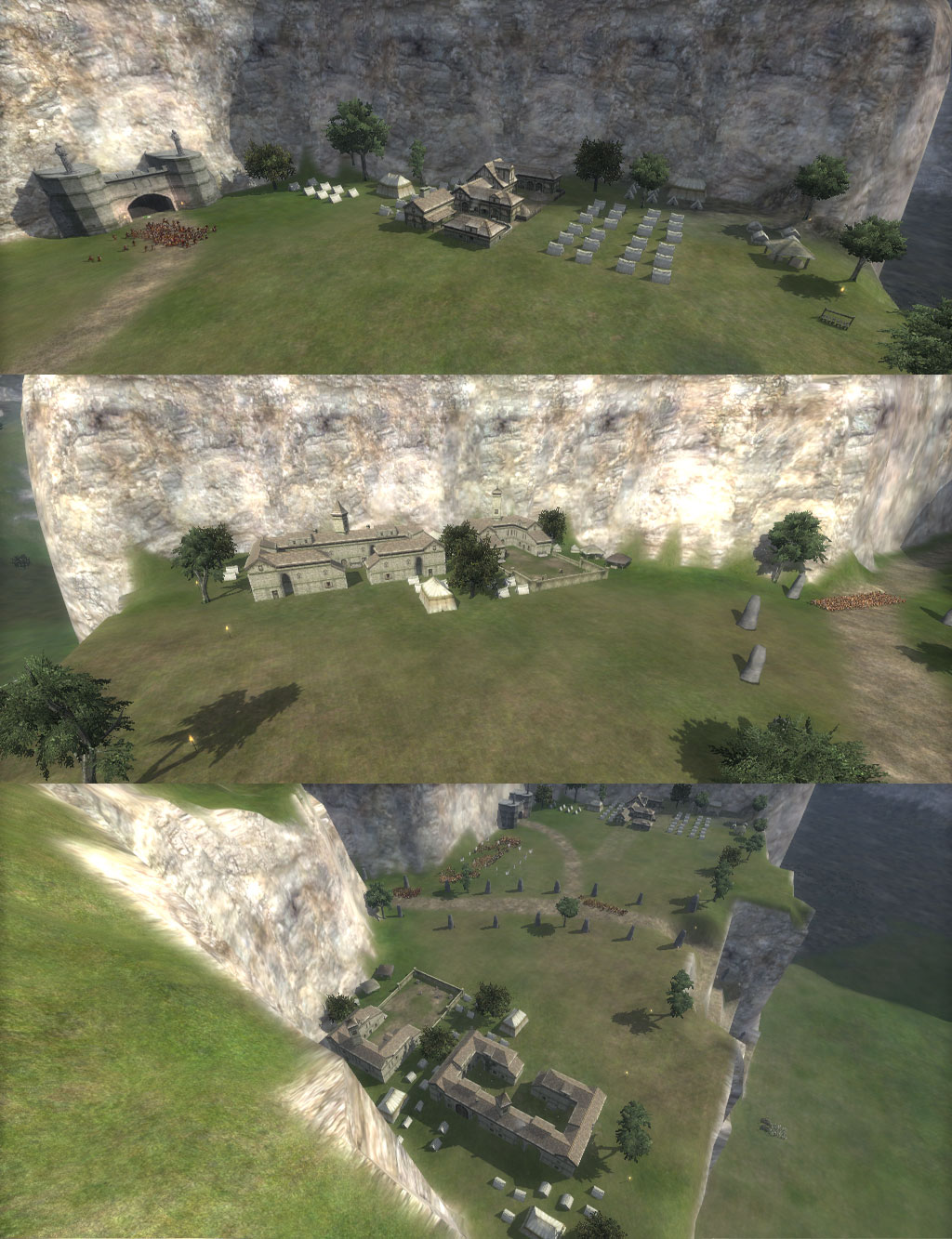 The Hill-men of the North may have access to Orcs, Trolls and Wolves but even a fool would not let them live within the settlement walls. No, they have their own place...

Orcs Camps and Troll Camps are buildings that provide their recruitment. If constructed then they are present on the battle map*.

* Maybe. It depends on the settlement model. They are available to all HotN-built settlement types, and many types for some other factions. But no custom settlements will show them, nor some factions. e.g. An Elf-built settlement will not show them even when HotN has captured it and constructed the Camps there.

The first image is an Orc Camp. The second a Troll Camp. The rest are both combined. 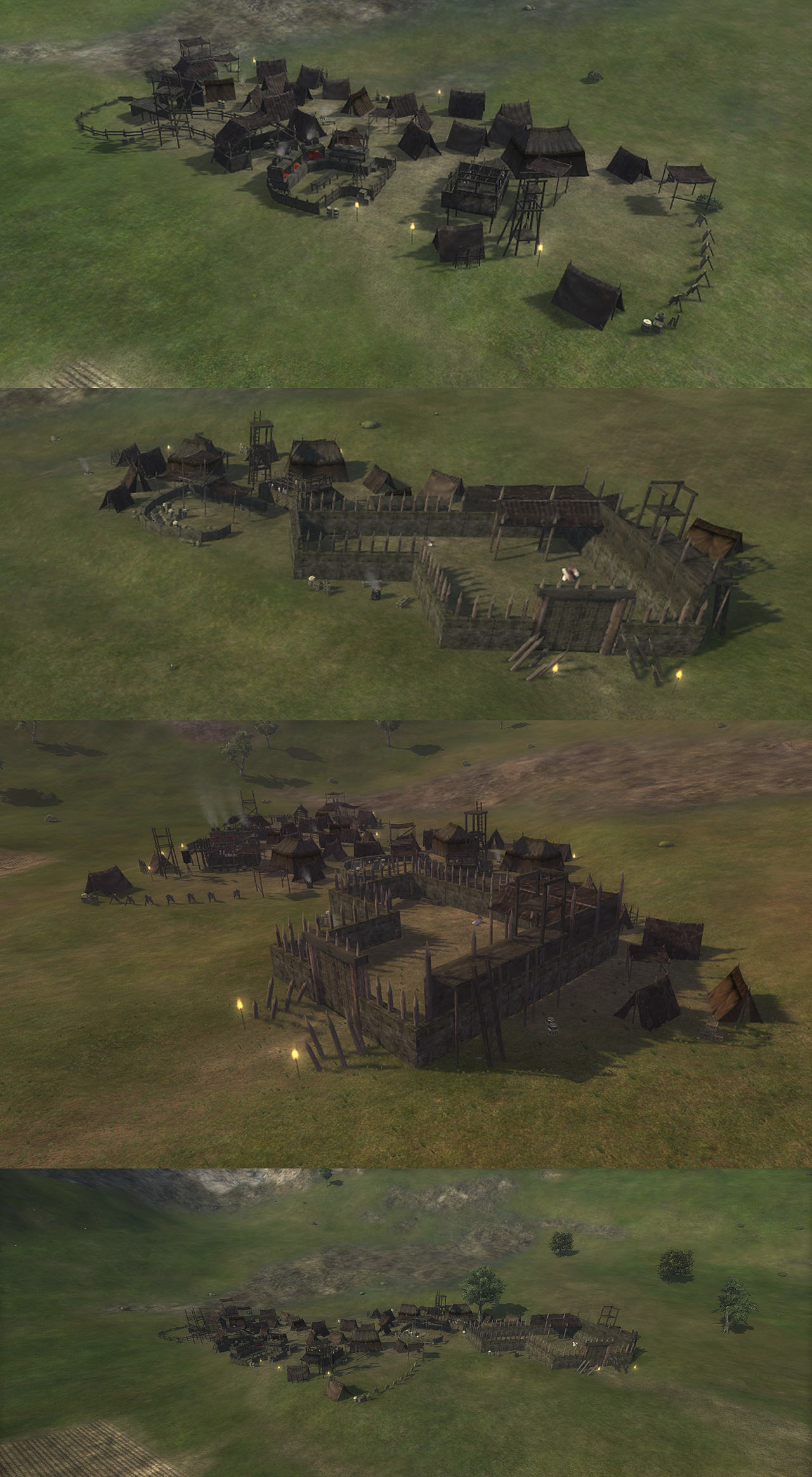 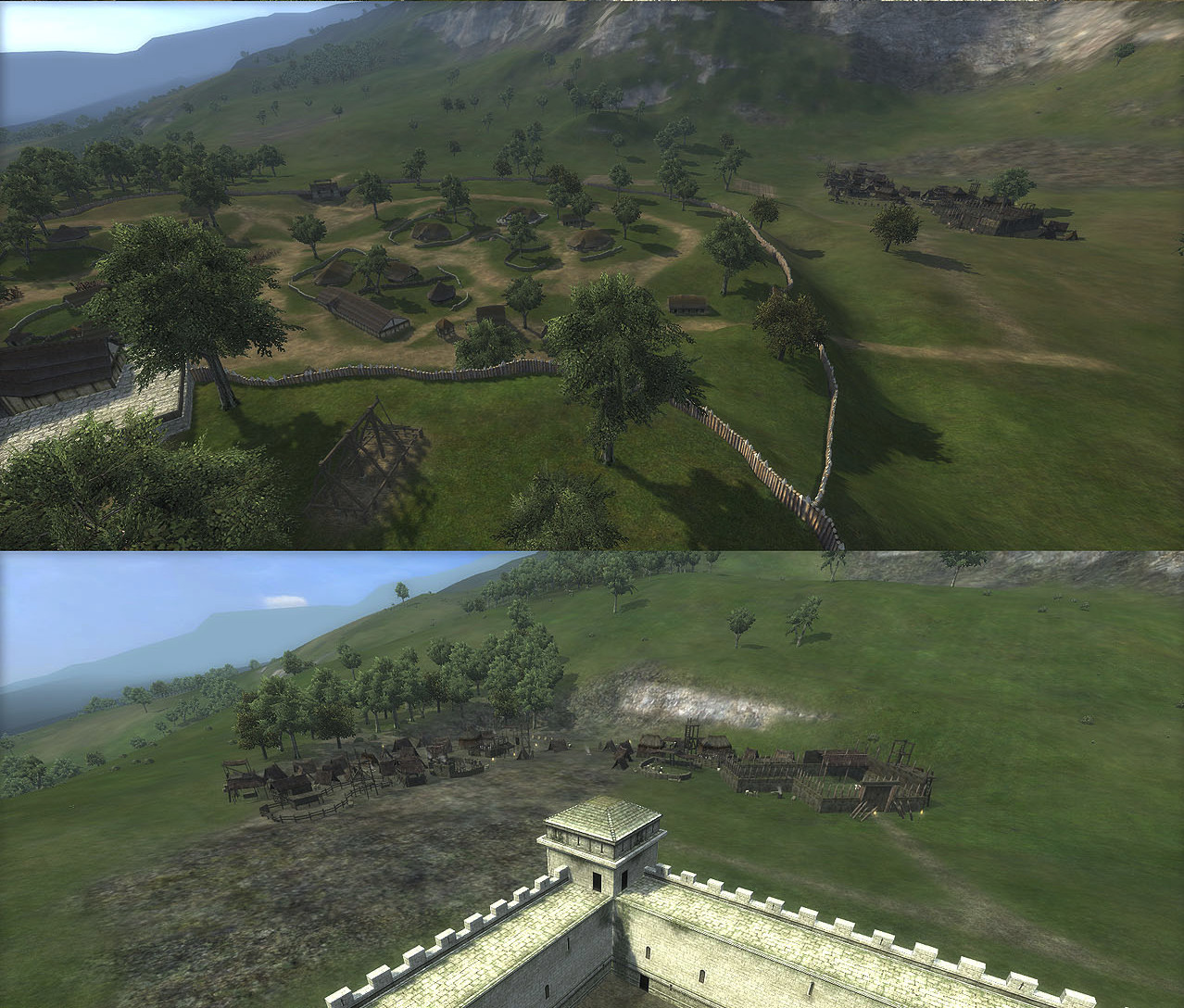 Preview 1 shows Umbar, the huge city that is the Black Númenórean capital. It is also a major port. Umbar just got even bigger...

This battle map port cannot be entered at all by armies. If the port building is destroyed on the campaign map then it will be absent in the battle map; rebuilding the port brings it back.

leo.civil.uefs - for Dunharrow from his Alternative Patch.
Red_Devil - for kindly donating the wheel winches and ship sails for Umbar Port.
xHolyCrusader - for some efforts and advice.
Wilddog & Makanyane - for the IWTE tool and their shared knowledge and help in the Workshop.
TATW for various bits and pieces used in the strat and battle models.
Thanks folks.

Wow, these are really, REALLY good looking. Kudos to the creators. Those strat models are amazing!

TY on behalf of Withwnar, and those who created the resources used :)
As I use to say, any artistic creation seldom fit everyones taste, but in this case it seems to hit home for most people ^^

That Umbar settlement is just... Wow

Not afraid to admit I agree, been waiting for the moment we could show you guys Umbar's harbour.
Drooled like Homer Simpsons each time I got back to view it, haha

My proudest fap yet !

Fantastic. Umbar has always been one of my favorite factions (Love me them Black Numenoreans) and I seriously cannot wait to control that amazing port city.

Am i the only one to think that Elven castles lack of "elvish style" ?

Umbar is dope tho

Considering Men learned to build from Elves and what they learned would been the practical way to build fortifications ("pretty/scary" fantasy castles that are not actually proper functionally castles always appear silly), and considering how our Elven castle settlements looks ingame, we at least do not agree, hehe: Moddb.com

Kinda like the pink road, make them stand out of the regular road, they look made of clay brick

Ha, while they still will return to orignal grey, that was quite a neat reflection ^^

Could even reminded us about what Glóin, father of Gimli, told Frodo they had built in the north in the later Third Age:
"Only in mining and building have we surpassed the old days. You should see the waterways of Dale, Frodo, and the fountains, and the pools! You should see the stone-paved roads of many colours!"

I wonder if Arachîr will ask you for this Umbar custom settement after you release. And if you would agree.

Yes, yes he will.
And yes, yes we will - unless DaC suddenly goes bananas and change their policy but knowing the guys, I doubt that (DCI's rule of thumb is to share our own work with those who share their works) ^^

It looks very nice. For me, the hype of this mod is quite high being a player of DAC and MOS.

Thanks from the team, mate
We hope to live up to expectations!