Every Saturday, we post some new screenshots and gifs. This week, we're showing off the base and the NPC conversations UI!

As you know, Saturday means more gifs and screenshots! For Screenshot Saturday #1, we showed you a screenshot of the base. But it was static and we didn't really go into much detail.This week, we're doing just that!

The base is where you are assigned new missions. It is also where you go to chat with characters from the game and learn more about them and the Homeworld's history.

As you can see, some sectors are locked and unaccessible at the beginning. As you progress through the game, more and more sectors become available to you, each populated with their own unique characters and missions. Sometimes, NPCs will move between sectors or not even be in the base at all until a later time. It all depends on what missions you complete and what NPCs you talk to.

In Project: Velyria, conversations can lead to a variety of things. Sometimes, NPCs just want to chat or fill you in on some crucial information. Other times, they want give you an item or inform you of a Codec Frequency you can use to chat with them or a different NPC that is normally not accessible via the base.

And, of course, sometimes, conversations will assign you a new mission. It won't always be an important mission that has major impact on the story though, some missions are just minor tasks you complete for the sake of helping your fellow colonists.Just like a lot of classic and modern roleplaying games, almost every conversation has options for you to choose from when replying. Depending on what choices you make when talking to an NPC, their opinion of you will change. Sometimes, an NPC will talk to you differently in comparison to other players simply because of your class! 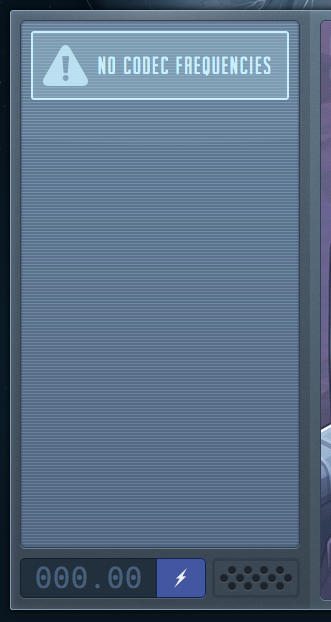 Bonus: This is where saved Codec Frequencies appear. When an NPC unveils a new frequency code, you can enter in the field at the bottom. But you also have the freedom to enter numbers on your own to try and find secret frequencies. Story-related frequencies are randomly generated for each player, so there can't ever be a definite guide of all available frequencies in the game, but even if you tried every possible combination, story-related frequencies can not be accessible until unveiled by an NPC (which is when they are generated).

We hope you enjoyed this sneak peek into Project: Velyria’s UI. We’d love to hear your feedback so we can continue to improve prior to the game’s release.

We're not sure what we're going to show off next Saturday. If you have any suggestions, feel free to let us know in the comments below!