Basics
Players compete against each other in co-op to be the highest points scorer at the end of a Doom finale (E1M8, MAP30 etc...), or at the end of a server map-rotation, or when a point-limit is hit. Points are awarded for more than just kills. Points are awarded for damage, items found, secrets found, multi-kills, barrels-blown and a plethora of other ways which gives a simple game deep game-play.

Add-on Pack
Furthermore there is an add-on pack that adds up to nearly 300 new Doom-like enemies and a ton of new power-ups as well as a 'Boss-Rush' sequence for maps like E1M8, E2M8 & E3M8 where players need to vanquish a sequence of bosses to finish the game.

Check out Scoredoom.com for the download and better overview. 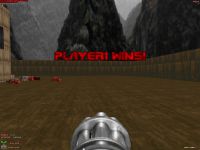 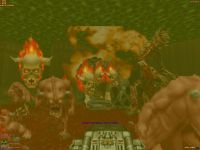 Scoring
Points are accumulated in a variety of ways:

* Damage done to monsters
* Monster kills (10% bonus of the orginal health of the monster)
* Extreme death kills (a further 10% bonus of the orginal health of the monster, on top of the kill bonus) are when you take the monster's health down to more than negative it's initial health (certain monsters explode into gibs)
* Secrets: Finding a secret first scores 250 points
* Map Objectives: Finding a key/skullkey first, and using it first scores 250 points. Reaching a level exit
first gives 100 points, and reaching a secret level exit first gives 200 points.
* Map items: Collecting a map item gives +5 points. Any item counted as a map item in Doom, is one that can always be picked up, and goes towards the Item Count percentages at intermission screens. Items like blue health flasks, armor helmet bonuses, radiation suits, artifact powerups, automap pickups, beserk packs, infrared goggles etc... Not armor suits, health pickups, ammo or weapons.
* Barrels: Barrels give +5 points when destroyed.
* Chain Bonuses: If a player can kill 4 monsters in a very short time, they will get a small bonus of
+5 points or more (depending on the monster's starting health), which accumulates up to a +5 or more point bonus, for every other monster killed after that, just as quickly. If the player can keep the rampage going, they will eventually get a full Chain Bonus of +5 or more points per monster. (NOTE: Any extreme death bonus will also be added to the chain bonus score for the killed monster, which essentially doubles the extreme death bonus during chain bonuses.
* 'Most' Bonuses: At the end of a level, 100 extra bonus points are awarded to the player which has
the most monsters killed, has the most items found, has the most secrets found, and has most barrels blown.
*NOTE*: It is important to pick up barrels and items etc..., since it effects the next score:
* Monster Infighting Deaths and Monster Suicides: Since monster deaths due to infighting and suicides are ultimately player assisted, there is a small bonus for these deaths too. *The player with the total cumulative count of monsters killed, items found, secrets found and barrels blown is considered the most active player and gets a full bonus of 10% of the orginal health of the monster killed this way.* Other players get a fraction of this score based on the
ratio of their cumulative count to the leaders. Though even players with 0 will get at least 1 point.
* Player Deaths: Player deaths due to other players carry no score penalty, though deaths due to monsters, suicide, and the environment cary a -1000 penalty (points get set to zero and are never negative).

That's got to be one of the silliest statements I've ever heard. A guy designing an FPS in 2009 is saying an FPS from 1993 isn't modern? Ohmigosh, how'd you figure that out?

Interesting mod though, wasn't aware you could do that much to Doom. Congrats. :)

@Elementalist: The moddability is partially thanks to the engine being derived from ZDoom, which has really extended what you can add/change.
Though of course I did need to go into the source code itself for a lot of it.

As far as the Robotron remarks, I agree with him by and large. Essentially watered down he's saying that Doom is fast-paced and fast-twitched, and the array of unique enemy types is similar to Robotron, in how they have very distinct attacks. At the very least to me it always seemed like Doom would be cool with a points system (hence the WAAAAY too much time I've spent on this mod!)

@invaderHUNK:
Never played Roblox, but this may interest you regarding cool things people are doing without even touching the source-code of these Doom ports:
Skulltag.net

Yes, I was trying to remake DOOM into Roblox, did't work. Well, anyway, thanks for making!

You new age gamers don't know the awesomeness of Doom!

www.scoredoom.com no longer exists, sadly.
It used to have the online leaderboard/hiscore lists for the official campaigns and various popular megawads.
I think it will still store local hiscores for each map in the wad, so you might make want to move IWADs (doom2.wad, tnt.wad) and custom map packs into the ScoreDoom folder, as it might cause problems if you share them between gzscoredoom.exe and other source ports (gzdoom.exe, zandronum.exe)