In-depth overhaul of taxes and migration mechanics (a re-purposing of the religion system).

Firstly, the tax system always perplexed me since at times when your buildings should be lowering the tax base, it did the opposite, and vice versa. Now that I went into the economy modding, I had to investigate that, and if possible squash the perceived bug. It turns out this was reported all the way back in the olden days, and the reason for it was proven (see here). For some reason there's a weird gap when you reach a tax income of 1000; if you go beyond that it'll take you down to 875, from whence you can start climbing again (it goes back to 1000 if you "lower" your tax income below those 875 again). 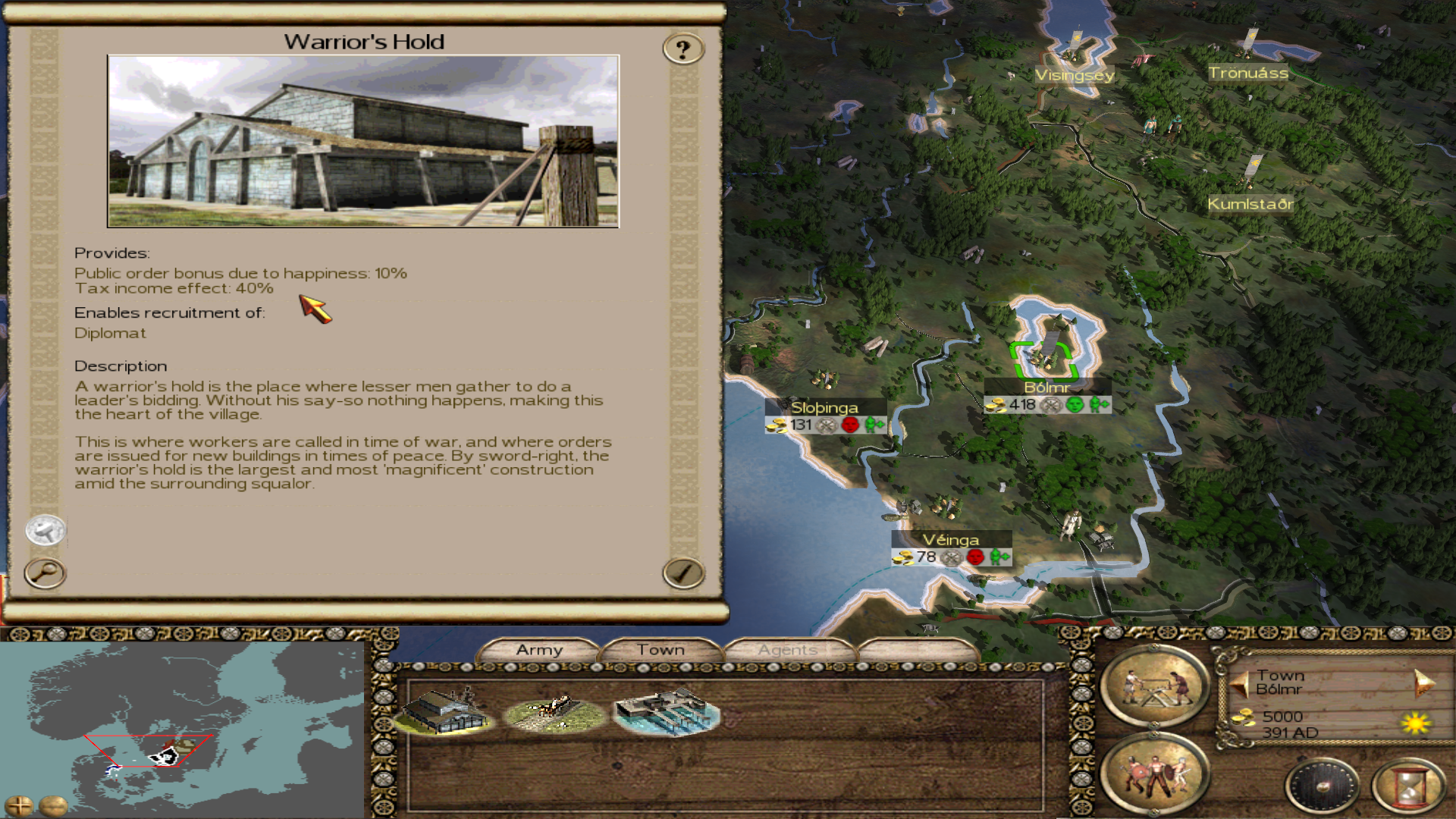 This prompted me to simply set the base tax income just above those 875, making it impossible to go lower than that (avoiding the jump up to 1000) [EDIT: The split is at 875, not 850 as previously stated, and this is at normal settlement tax level; you can still go lower, to about 700, by going to low tax level as this doesn't change the actual base, only modifies it]. It makes smaller settlements slightly better off relative to before since there's always a pretty decent tax base to take from. This was achieved by giving the core buildings a set percentage increase that will prevent the possibility of a base tax income lower than 875 (the higher core buildings will need lower/no increase since the base is already pretty high/above the gap). Many buildings will now either provide a tax penalty or a tax bonus, e.g. recruitment buildings will lower your tax income (reflecting the time taken from other work to train, and privileges granted to warriors/vassals) while blacksmiths, farms, and other infrastructure improvements will provide a tax bonus. 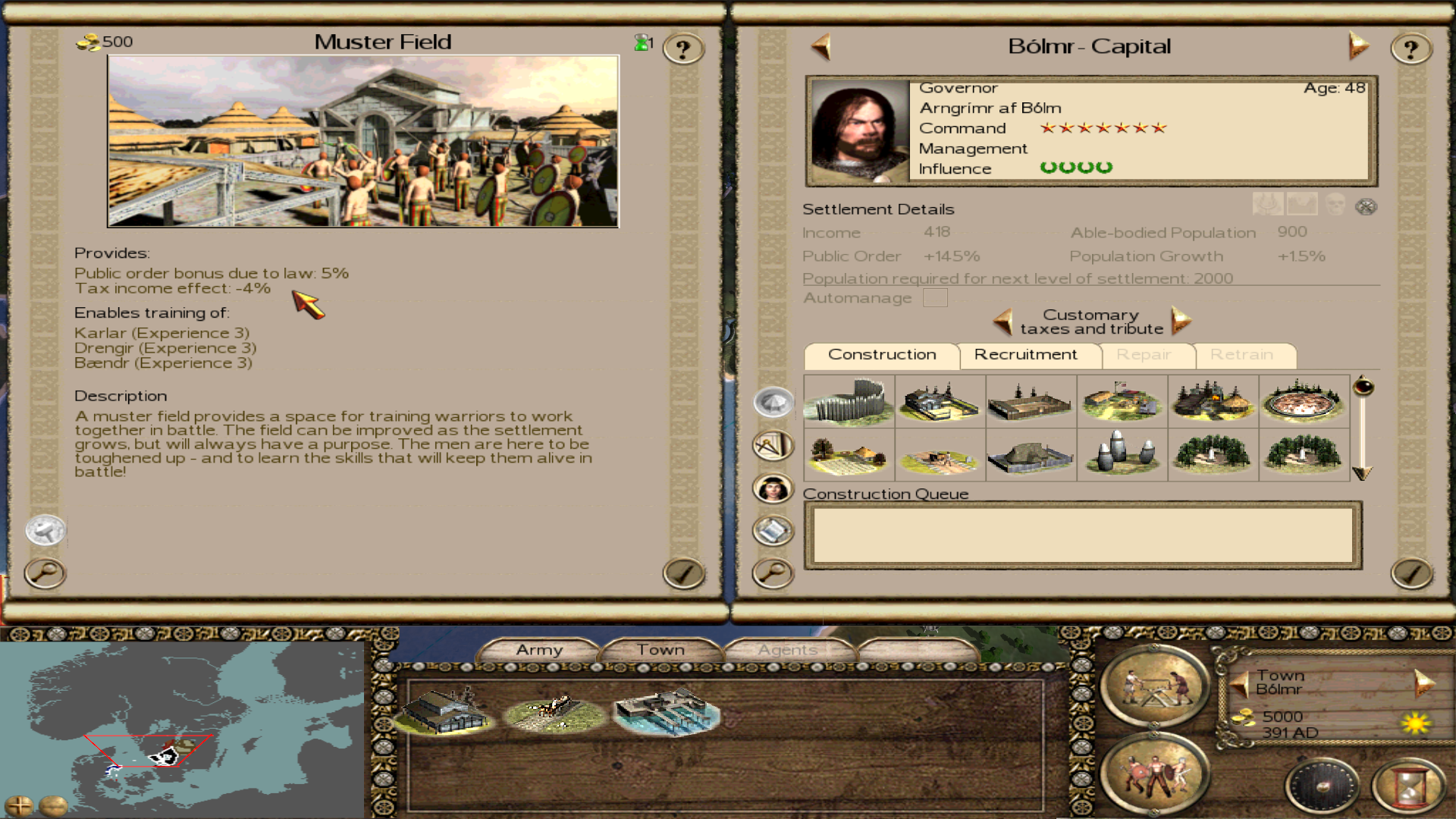 This leads me to the next big change I've made; namely a re-purposing of the religion system. Religions have now been replaced by a stance towards migration: either a settlement will have a strong pull towards migratory tendencies, or it will be in favour of a more settled "sedentary" stance. The migratory tendency will create unrest in your provinces (just like having the wrong religion). Settlements will always officially be "sedentary", but it can be almost 100% migratory (a lot of unrest). 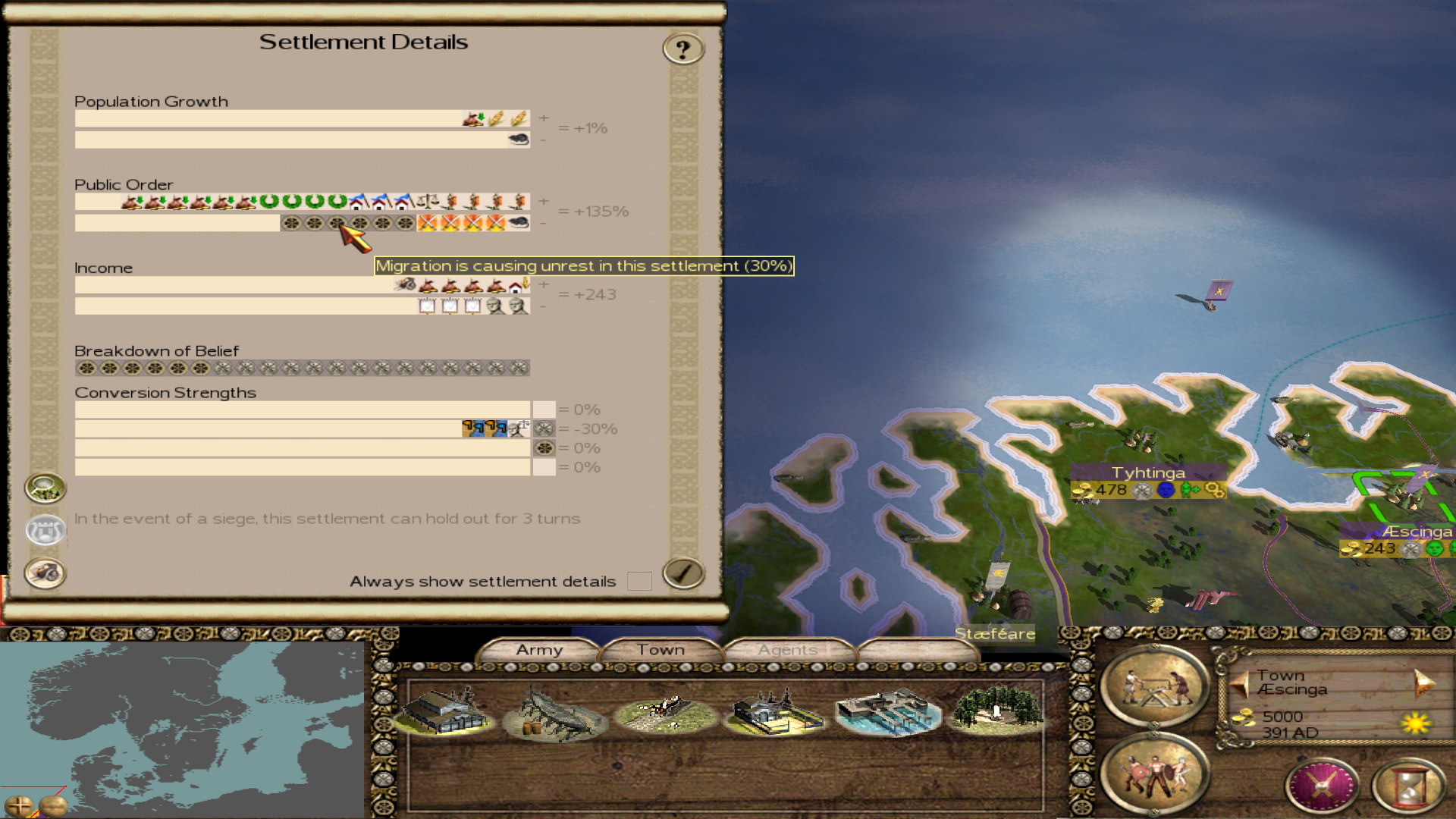 The core migration building (present in all provinces, and indestructible) will prevent the conversion towards sedentary belief. The negative value will not in itself do anything except prevent family members, neighbouring provinces, or buildings from having an effect before they reach positive values. The migratory belief is only spread if there are foreign agents (spies or assassins) present in the province. 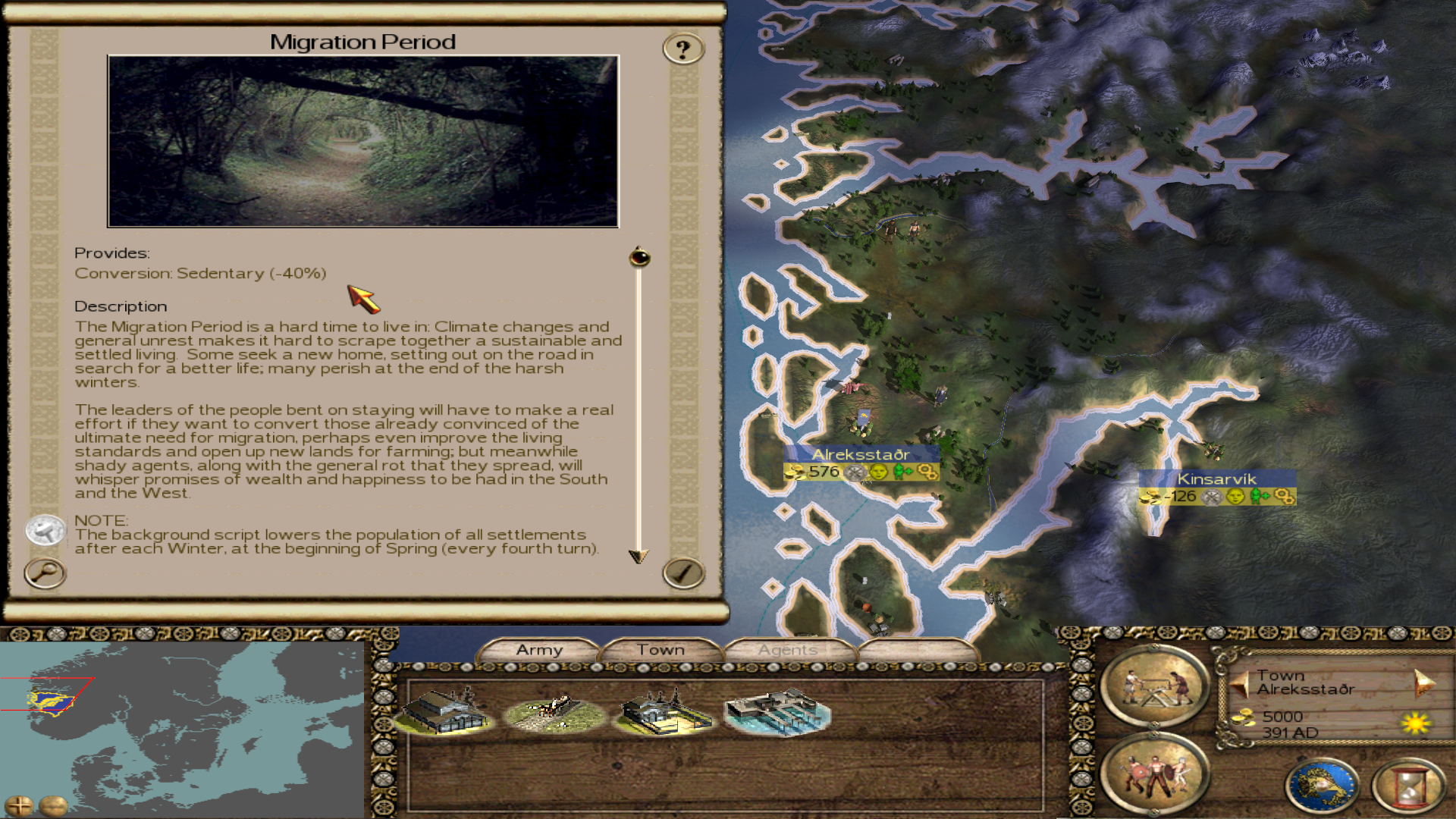 The agents will automatically receive the trait that spreads migratory belief when they end their turn in foreign territory. This makes it very important to hunt down foreign agents, and in turn you can use your own agents both for counter espionage, killing other faction agents, or spreading unrest in other faction provinces. When agents enter friendly settlements they will receive a counter trait that removes the spreading of migratory belief (this makes it possible to use agents defensively). 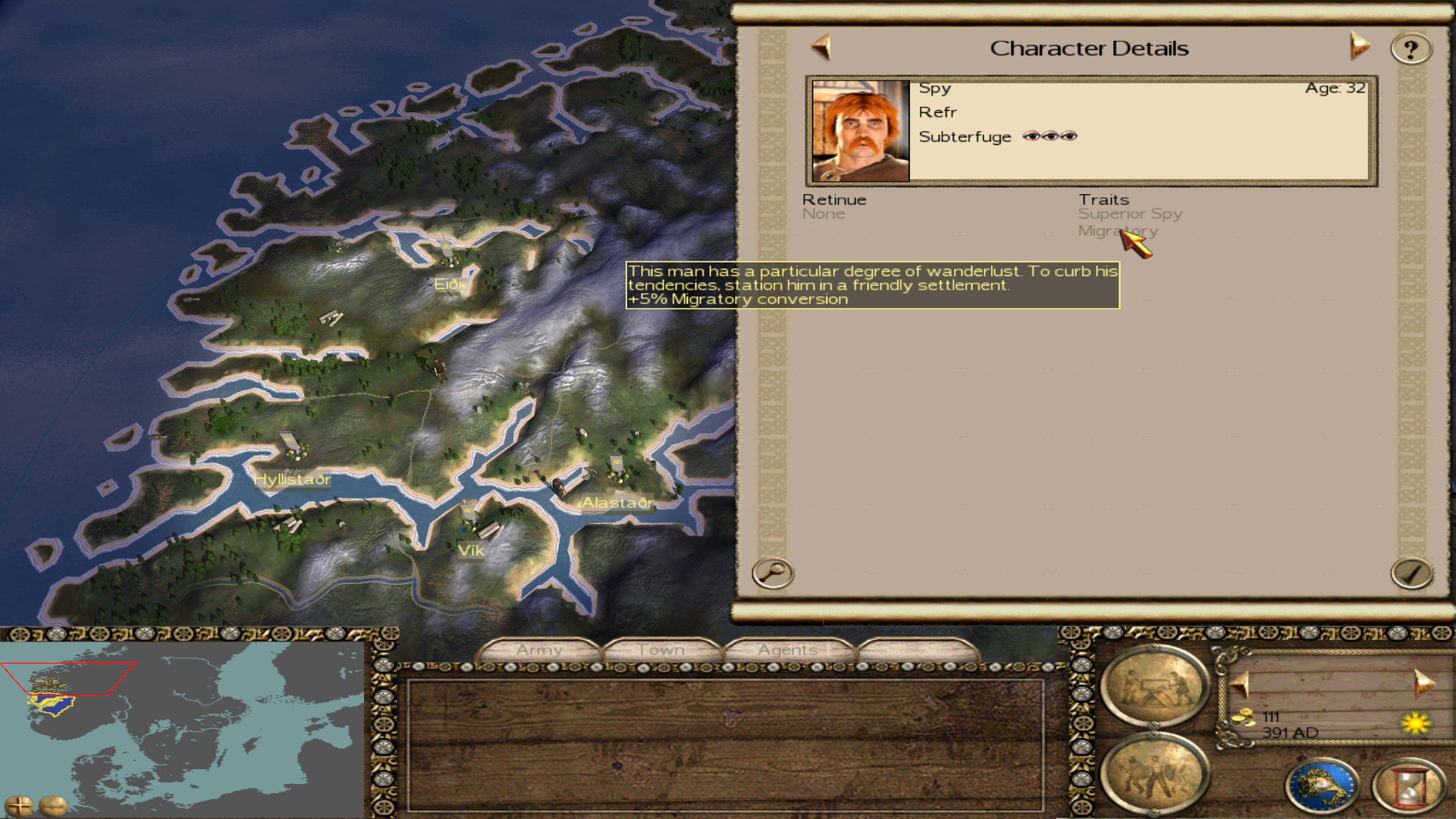 The only effective way to counter the spread of migration, and turn it towards sedentary belief, is to mass family members in provinces or to improve farm levels. 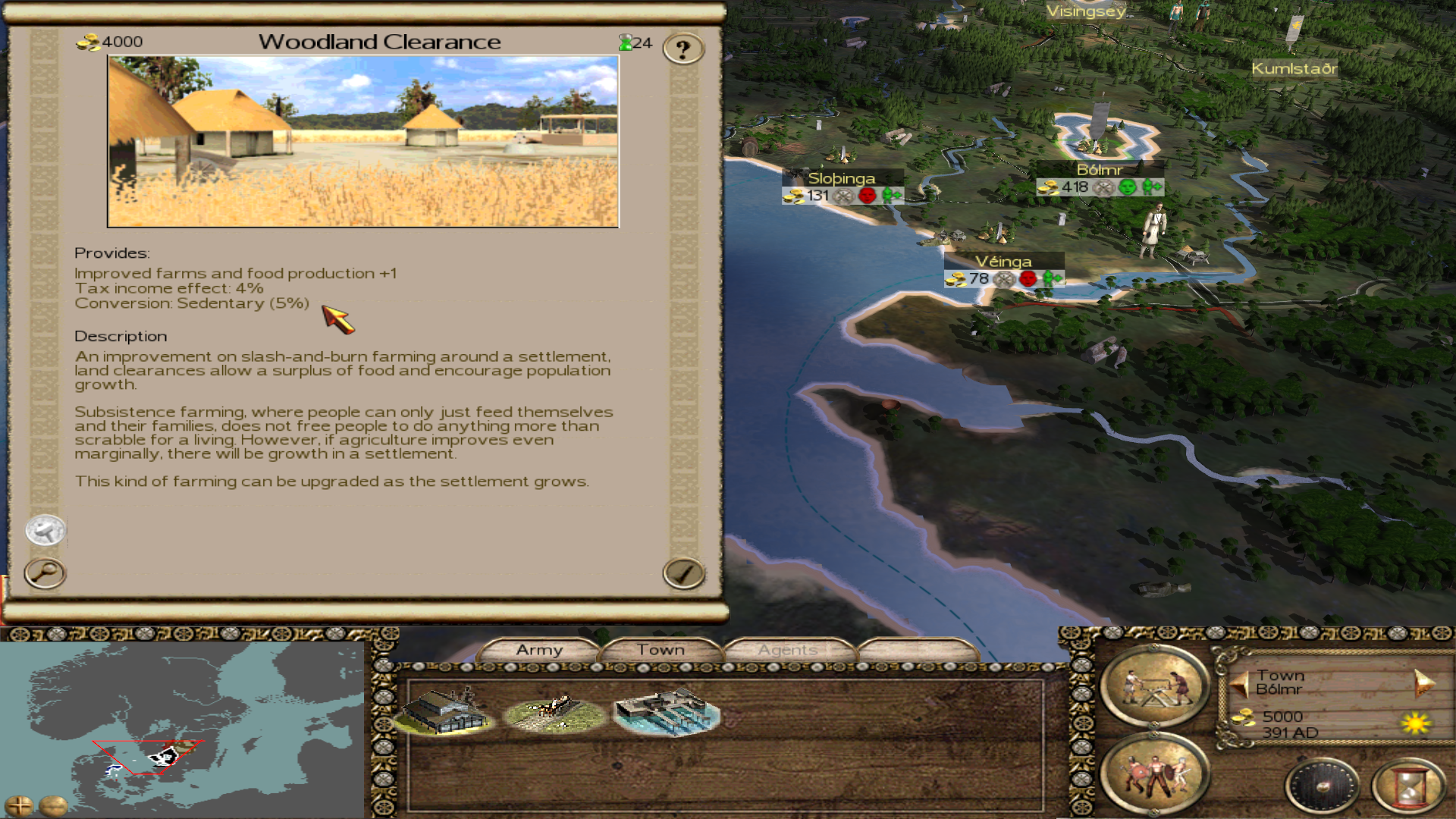 That's all for this preview; though as a side note I can say that I've also made a real effort in other, less flashy areas, such as mercenaries, rebel armies, balance fine tuning, additional units, and religious buildings.