Machines that enable Cogmind to build his own parts and robots.

Aside from the terminals described in the previous post, other machines have more specific functions and therefore a narrower range of options when using them. Below are two more such interactive machines.

"Scanalyzers" can produce a schematic for a specific part you provide.

An initial connection to a scanalyzer will essentially always look like this, since there isn't anything else it can do.

The first thing you have to do is get it to accept the part for scanning--a separate window will open listing all available and applicable inventory items. After inserting the part you hack to initiate the scan, which produces a schematic if you succeed. The good thing is scanning is effectively instantaneous; the bad thing is a failed hack will cause the scanalyzer to eat the part.

Higher level scanalyzers are required to scan prototypes and more advanced parts, and scanalyzers will reject broken or faulty parts.

As for what schematics do, that's where fabricators come in.

Fabricators build parts and even robots according to schematics obtained by scanning a part at a scanalyzer, hacking into a schematic database through a terminal, and possibly through other means.

Although fabricators are self-powered, they do not have their own source of matter. Before fabrication can begin you must provide the necessary matter in the form of matter containers. This is good because I don't think matter containers were useful enough in the 7DRL version. They're not too difficult to find since unarmed worker bots carry them, but you'll need to fill them with matter, which is now possible via a new feature.

In the 7DRL prototype matter containers only served to increase your own matter storage capacity, but didn't actually retain the matter themselves when removed. Now you can toggle the state of an attached container to set it to LOAD itself from your stores when detached. This feature works for energy containers (like batteries), too, and is an option rather than default behavior because you may be low on resources and want to retain them rather than store them away in your inventory.

This matter storage unit will take up to 50 matter from your stores when detached. It will return that amount to your stores when reattached, or can be fed to a fabricator to build something.

When fabrication begins surplus matter will be returned to your storage, or put on the ground if you have no room. Empty matter containers will later be returned once the fabrication is complete. 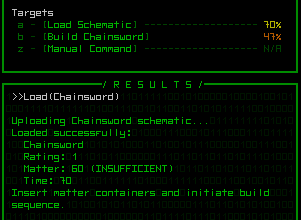 Once a schematic is successfully uploaded, the system will indicate the required resources and await further instructions.

As you can see fabrication also takes time, another risk of building your own stuff since hanging around in the same area for too long can be dangerous.

Thanks, I will! In the end there will be quite a few different ways to play and interesting things to do, though in the interest of finally releasing something the open alpha will probably be only 75% feature complete. Support will be there for all the features (and pretty much already is), but not everything will be polished enough to include right off the bat.

When to you expect to release the open alpha :3?

This totally needs to get added to the FAQ, because I get this question a lot. However, the official answer is still "not sure." Lots of variables involved, but almost certainly some time within the next few months.

cool, looking forward to it!