Big changes in this update. I've added stats, overhauled the exploration food and water system, added food items, and more. So lets get in to all the changes.

Big changes in this update. I've added stats, overhauled the exploration food and water system, added food items, and more. So lets get in to all the changes.

Changes to the Player:

Because I removed the player upgrades item/menu I had to have a way to substitute for those things stats didn't cover. So I've added several passive items to account for things like ammo count and exploration water. 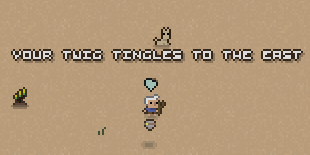 Changes to the Starting Gear/Map:

So I am still mulling this around in my head if I want to add it. That is injuries (on the flip side would be mutations). So the idea would be if you took damage and you HP is lower then 50% you have a chance to injury yourself. Injuries would last even after death. Healing them should be expensive or hard.

The next thing I really need to do is work on MODS/powers. I am thinking E.D.I.E. will gift you a suit that allows you to do a variety of sand like powers. Like harden sand to make a temporary wall or make a sand blast wave stunning enemies. Mods will either have cooldowns or use 'suit power' that will regenerate (or can be repowered with batteries) or maybe a combo of both.

After that I will make crafted items have stat modifiers and tier levels. I will most like also add more weapons.

Once all that is in, I will fill comfortable saying the game is feature complete. I could then start focusing on adding content, but will most likely transition from Alpha to Beta (which most likely will involve Kickstarter and STEAM EA).

AND AS ALWAYS! DON'T FORGET TO JOIN OUR DISCORD!