Great big news from us here at Coffee Stain Studios. You might have thought we had given up but that is far from the case! New exciting things are happening and we hope you'll be as thrilled as we are!

We are aware of the fact that you haven't heard from us for a while, but I assure you that we're still here kicking ass. We've finished a Demo of Sanctum including quite massive changes from versions currently available publicly. This Demo is to be released on Steam in the near future, so keep your eyes peeled!

A few of the features to look forward to:

We hope to get all your feedback on the Sanctum Demo coming for Steam, your feedback will base much of our future development of Sanctum. We need to know what you like and dislike, what you think we'll focus on and just how fun you think it is!

A new release-trailer will be uploaded in the near future, showing off Sanctum in full glorious action! 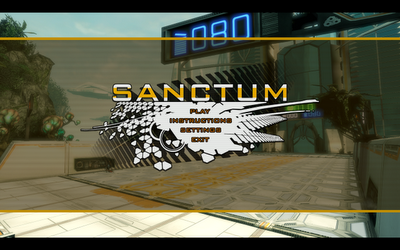 The Main Menu of the Sanctum Demo.

We here at Coffee Stain Studios are in full development and production. We've moved into our new offices and are making sure Coffee Stain Studios is awesome from the ground up. Right now we're focusing on developing two iPhone-games for planned released Q3 2010. First up we have a 2D tower defence game based on Sanctum, this will give some awesome tower defence action to all of you out there with an iPhone. We're also working on a new IP named I <3 Strawberries, which is a casual puzzle platform game for all of you looking for some enjoyable strawberry collecting in a jumpy fashion.

Two new websites are in development and will be finished shortly. This includes a company website with updated information about us and our products, along with linkage with our additional online presence. (Links below) We're also working on an official website for Sanctum, which we think a stand-alone game like Sanctum deserves. We hope you're as thrilled as us about these things! 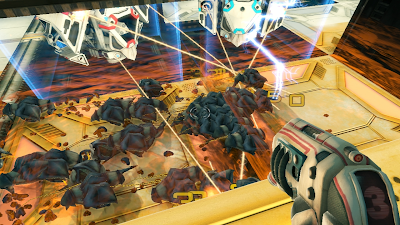 We've recently extended our online presence by now being available on a variety of places. For interesting continuous updates about various aspects of our development on Sanctum, and our other products here at Coffee Stain Studios, follow us on these sites: 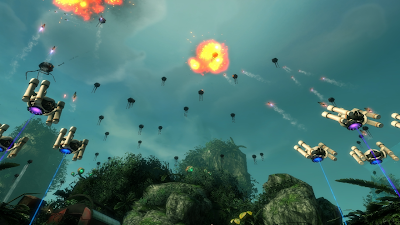 Anti-air action in one of the airborne waves of enemies.
Comments

I simply LOVE the art style of this. The alpha had something fantastic started. Keep it up! A website is just the beginning!

Good luck. Hope to see something great from you in the future.

Oh you'll see plenty from us in the beginning! I look forward to hearing what you think about the Demo. I promise you there are massive improvements from the alpha!

Does this have multiplayer yet? I go to a LAN party every month and we love LAN games like this. I just hope when you do add Multiplayer you take the time to do it right and not make it a second thought.

Sadly it does not have multiplayer as it is now. And unless we get a huge amount of feedback asking for added multiplayer support, I doubt we'll be able to supply multiplayer even for the full release of Sanctum, at least it hasn't been planned as of yet.

Though we'll be basing our continued development on the feedback we get.

There's another one :p

Seriously though, any kind of multiplayer interaction for a game like this should greatly enhance its popularity and longevity.

I can do nothing but agree with you entirely. But sadly we'll have to factor in all the time spent and how we're going to reach out to enough people interested in that, also we have the unfortunate fact that we have to make a living.

But certainly, I'm in no way closing the possibility for that. But if it would take us, say, half a year longer just to add (Plan, Code, Model, Texture, Animate, Balance, Balance, Balance etc. etc.) multiplayer, it'd better be certain it pays off, else we could be in trouble.

However, rest assured that I've taken note of your feedback.

I Second the multiplayer, me and my friend play WC3 TD's togethhor and if you added community support for map making and server i could see lots of cool maps come out with unique multiplayer TD

I high encourage you guy implement multiplayer if it means i have to pay extra so be it it will be worth it!!! i need an upgrade from warcraft 3 @_@

now i certainly dont have much of an idea about how ue3 handles mp, but shouldnt it be easy enough to push all the ai and variable stuff to the server while having clients only get the positioning stuff?

it isnt like you would have to write the whole client server synchro framework thingie either...

you're correct about us not having to write all the actual net-code and such. But we'd still have to re-work much of the current code so that it actually would work in multiplayer, as it has not been on our minds up till this point. We simply didn't have the time nor reasources to do everything multiplayer compatible from day one, and therefore a decision including multiplayer could mean a lot of work.

That is however something that would have to be investigated further if and when it turns into an option.

****, I really would like to have UT3 to play this, really nice looking guys!

It'll be a complete standalone when it comes out as a demo on Steam :) So just hang in there a little longer and you'll get to enjoy it without Unreal Tournament 3.

Great News, Nice to see more devolopers starting to stand out from the crowds.

It makes me sincerely glad you feel that way. And rest assured we're making our best to supply you with the best possible.

Don't have to make the multi-player portion revolutionary and competitive.

Can for instance give the other player control of a little flying robot with a small gun and the ability to take control of a turrets. Kinda like a little helper to take out the odd enemy or two. Would allow the odd casual player to call his friends for a bit of assistance.

That and give modders the ability to make their own maps and set up their own waves etc and you have yourself a game with some replay value that you can enjoy with the occasional friend.

Maybe then in the further future when sufficient interest is shown, you can take the game as far as you want.

On another note, I think it's time for an icon change kinda like The Ball to show that the Sanctum is it's own game now :)

Before more people think they still require UT3 to play this.

I can not wait to play!

I'm glad to hear ;) Make sure to share your feedback when you do! We want to know what you'd want from the full version of Sanctum :)

I visit the site every day to see if there are any updates ...

Hey guys, I'm a big fan of what you're doing here. I work at Tripwire Interactive, makers of Red Orchestra and Killing Floor(and winners of the Make Something Unreal contest in 2004).

First, let me say that the concept for this game is simply brilliant. Your execution is very good, as well, but does the game seem a little hard to you guys? I consider myself to be pretty good at shooters and I've played quite a few tower defense games, but I found myself frustrated in waves 3 and 4 in the demo, when I felt I was simply unable to do anything to win. Am I just doing something wrong or is it meant to be that hard?

Good luck with the game and it's release!

Multiplayer please. A friend and I loved Defense Grid and really wanted to see a multiplayer mode. But this, FPS view, it's gotta happen. Build your maze and then setup to waste the bad guys. Good times, good times.