RWR 0.87 continues on the path of extending support in multiple development areas, see the full change log. We've now got our second radio call request type in addition to the good old mortar strike: paratrooper reinforcements! This one will certainly help to organize those surprise attacks against the less defended enemy bases away from the main battle area, and thus actually succeed in capturing them too. Just watch out for enemy comms truck, it'll jam your radio :P 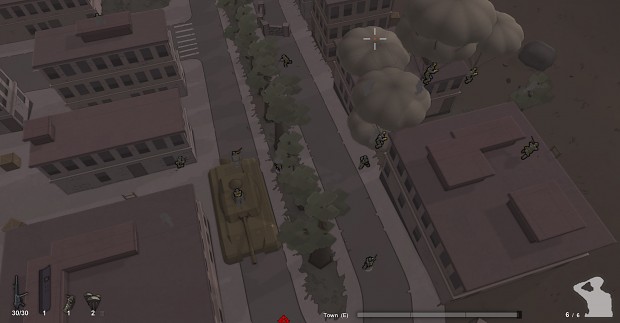 Another highlight in 0.87 is the tank: two gunner seats, one with MG and the other with rocket shooting cannon, with tracked steering. We haven't polluted all the maps with this beast in fear of it being overly overpowered, but we'll see how it ends up being. At least on InvasionUS yesterday, a few of us happened to start the invasion from Suburbs, blessing us with the tank, but we still had to fight hard the swarming Greys coming at us. The havoc was awesome, but in the end we certainly took a beating that time :D

We've also added cargo trucks here and there in Invasion, the main objective outline being to locate the enemy cargo truck, steal and deliver it safe near an armory at a friendly base. Great thing is that it's handled as a server side script module, allowing us to tweak it on the fly without client side updates required from players.

Beneath the hood, the battle system has gone through some nice upgrades, basically allowing more than 2 factions in battles now. We've yet to set everything up so that it would be easy to choose the faction setup in the UI, and actually we don't have assets other than Green and Greys at this point, but we should come around to it sooner than later. In the meantime it should be possible to use the skin mods and set those battles up manually, would love to hear about it if someone gets to try it!

WE NEED MOAR GUNS! Also, this is damn cool. i'm glad i bought it.