0.73 is now out with plenty of improvements! Most importantly, a trophy panel is now shown in the menu, where you can view your total stats and badges you've earned. The new winter map has been pretty much finalized now, mostly the end bases went through bigger changes.

Vehicle steering has been improved, the sliding mechanics work again a lot better, and APC with a 40mm machine gun has been added in the vehicle set. Besides the driver, the vehicle features a gunner seat and 6 seats at the back for transporting a squad. For now, the vehicle makes most impact for online gaming, as the AI still lacks the ability to drive or use vehicle weapons. That, however, will be my next top priority in features to add, I'm sure I'm gonna have fun implementing it! 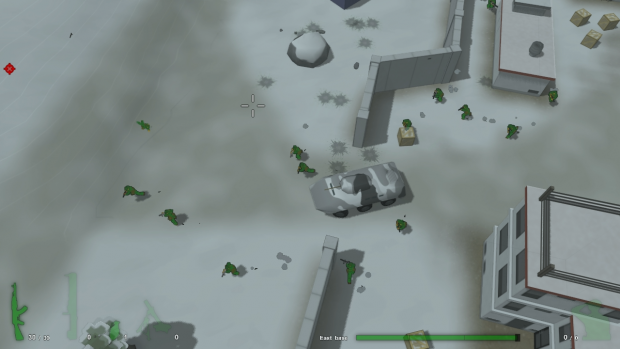 A few AI bugs has been located and fixed, most notably the "deserter" bug where occasionally even a somewhat big squad of soldiers decided to leave out to the edge of the map and just stay there, disabling them from the battle - thanks to Ivan for the savegames to investigate this one. AI balancing settings have been again touched, in hopes of making the last base battles less time consuming.

Other than that, I'm happy to say that the Linux port for RWR is coming along nicely! Graphics, apart from shaders, and sounds basically work already, so now it's just a question of fixing the rest of graphics issues and studying what's the preferred way to distribute the game on Linux.

It is. There's an issue with the MCF update with some of the resource files, I'm looking into it with Desura support.

Meanwhile, you should use the standalone 0.73 installer, which should get approved by Desura really soon now.

Terribly sorry for the inconvenience!