Hey guys! Only a few things for this update... To start off with, we have a new profile header and logo for our group Rolling Tank Productions. Check it out. Let us know what you think, if you want. But to be honest, I'm rather proud of it myself!


There's also been a few more coding changes this week. Such as the 5 resource gain every 5 seconds, has been moved from the refineries to the Construction Yard, and increased to a higher number. Also, a paratrooper drop has been added. We've also been having a few modeling problems that we've encountered. Now, we would like you to help us if you have the knowledge. When exporting a .W3X file from 3DSMax 9, we encounter an error code (you can find this code on my personal blog as we don't want to make this post too long). We would very much appreciate this help, as getting a unit into our mod will make the rate of progression jump up to an extreme

. All you need to do, is place a comment on the blog post or message me or Dan2172 with any links to information and whatnot.
Thank you!

Finally, we are on our way to getting some really decent music on our hands! Forgetting Gravity have just released their EP album and have shared it on their videos slot, on their personal page. It's a 14 track album with plenty of variety. Check it out, leave some comments and you'll be seeing some similar stuff rolling in for the mod's soundtrack. 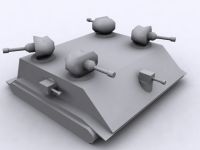 Over the next two weeks, the team plans to get a lot completed in order to get the BETA release underway as soon as possible during the month of September. Such updates include:

- Created by Gen.Kenobi and his GRANS Productions Team.
Registering at GRANS Forums and posting a reply on the BETA Race forum will allow you to be the first to test the new BETA.