We're baaaaaack! Got a few things to discuss, including Jurassic World content (spoiler alert!), as well as showing off the new weapon upgrade system and an updated version of the Visitor Center lobby.

And I'm back...can't say for how long or whether I'll disappear for another two months, but I'm here for another update!

So as you have have noticed, I changed the topic title because of, well, a lack of WEEKLY updates. I want to get more out, but I really haven't worked on too much since, so it'll have to wait until I can show some more real content. First off, a new image of the updated Visitor Center for you all to check out...got some fancy-schmanzy lighting effects going on there! 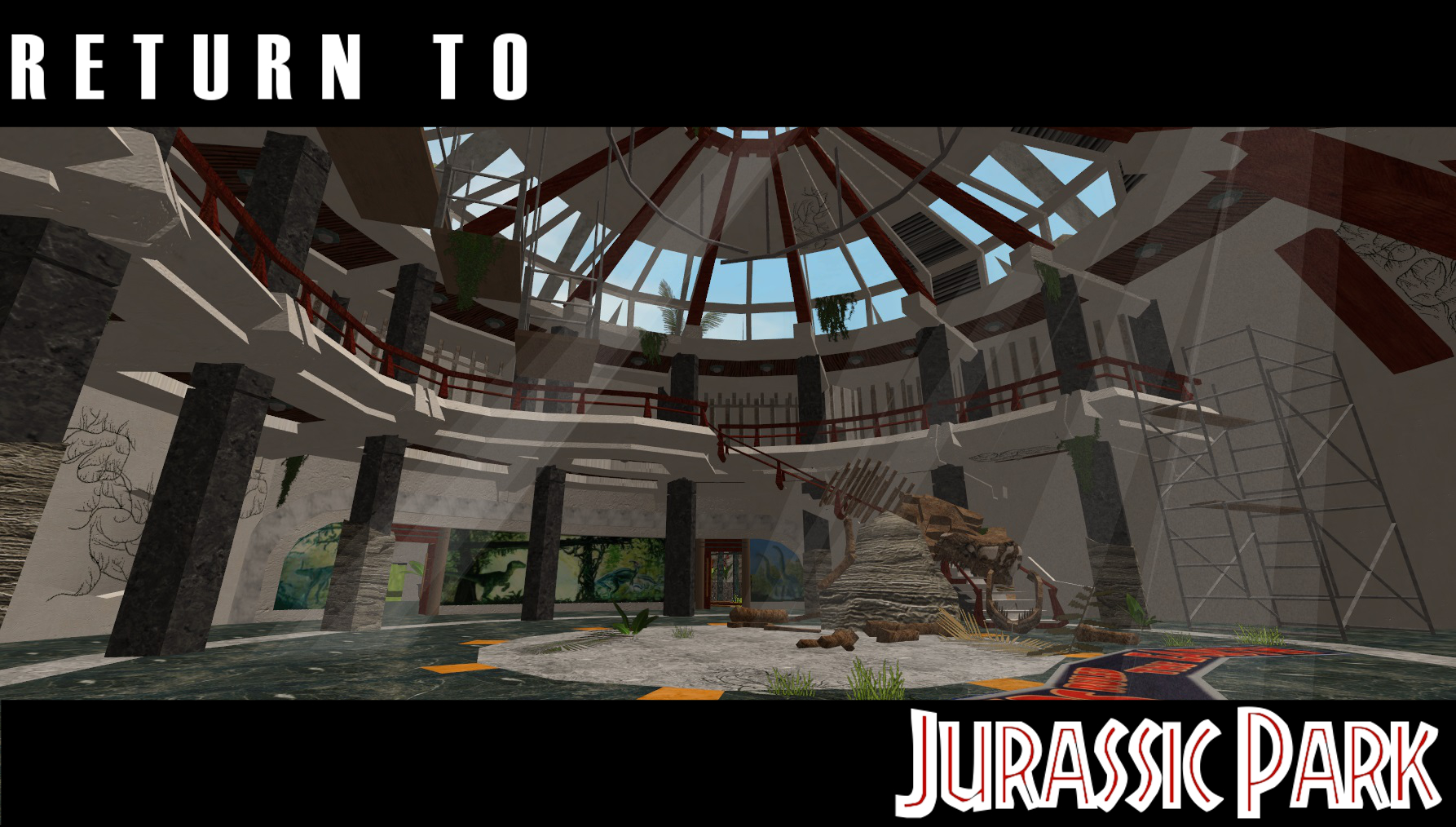 The Visitor Center in general still has a lot of work to do - I'm hopping hppav will return and finish it off soon so I can complete my work on it and move on.

Now, since the last post, Jurassic World was released, and you can see my review on the Trescom forums...in a few words, I was disappointed. However, a few good things did come of it: we got a look at a decayed version of parts of Jurassic Park, and I was able to determine a few more things location-wise. It appears, for example, that I was actually fairly accurate with my guessing of the terrain elevation near the river and the Aviary, and the big mountain range in the north of the island looks pretty similar to the range seen behind the park in Jurassic World. From what I saw in the movie, it appears Jurassic World's lagoon is located roughly around my placement of the Brachiosaur paddock, just east of the watering hole. The Indominus paddock seems to be somewhere in the island's north-west, around where I have situated the quarantine pens, and Grady's Raptor paddock is somewhere around there too. One day I might draw a map up to compare locations and see how accurately I can position JW's facilities. Anyway, I'll likely be taking some inspiration from JW's depiction of the original park - that parking garage, for example, will likely make an appearance.

I outlined the weapon upgrade system for the mod - basically, you can improve and add-on to weapons using certain tools and pieces you'll find around the park. Here is my post from Trescom for you Moddb folks:

"In RTJP, many weapons will be upgradable using various tools and supplies, like a knife to sharpen the weapon, a hammer to drive a nail into your baseball bat, or combining a knife and a long stick to make a spear. Firearms will have attachments like Aimpoint sights, foregrips and extended magazines that can be found in the world and added to the guns. Since weapons will be reloadable in RTJP this will make finding and keeping a weapon with you a much more rewarding venture, rather than finding a gun, killing a few Raptors and then throwing it away. This system was inspired by Project Zomboid's crafting system and I'm working hard to make it feel unique and worthwhile.

Additionally, melee weapons can break in combat if used too much, and some will have more "health" than others. I'd like to have some visual indicator of a weapon's state, but at the moment I'm thinking it's just going to be a random occurrence to avoid too much trigger work per weapon. Of course, finding tape to reinforce the weapon will make it harder to break or even indestructible, although using the limited supplies on Isla Nublar will hopefully make players less likely to just burn through resources when they find them - for example, you might be carrying a tennis raquet and come across a roll of ductape. You know you can reinforce the raquet with it, but you leave it for now knowing you can use it on a better weapon, like a fire axe, in the future should you find one. Decisions like these are the kind of things that I feel will make the game more like a survival adventure rather than a straight-up shooter with puzzles. Many of the better weapons like SPAS-12 shotguns or M16A2 rifles will also be less likely to carry ammo, however should you find one and take it with you and then find some ammo elsewhere, you will have a distinct advantage over if you simply taken a loaded Colt 1911 pistol instead, because now you have thirty rounds in an automatic 5.56mm assault rifle rather than seven rounds in a .45 pistol. Bigger bullets means bigger prey!"

I have made a very simple system for this, as well as a few models to test out in the test level. I've got a model of the combat knife, with all magnets, physics and triggers for it set up (it even makes a "whoosh"-sound when you swing it!)...I have found that it is actually fairly deadly when swung hard enough. This will be one of the better melee weapons on the game, with a low chance to break and high damage:

As for the actual upgrades, here's the SPAS-12 shotgun for the mod without any improvements:

And here it is with one of several possible (albiet unimplemented) upgrades, a holographic sight. This particular sight will be fairly rare due to its ease of use.

The sight will be able to attach to most firearms, though it will have varying levels of accuracy simply due to how the game is designed. With the SPAS, it actually works very well - the only time it will miss is at near point-blank range...which is good, since it adds to the difficulty and the panic.

So, that's all I can think of for this update. I plan on doing more work on the mod in the upcoming weeks, though that all depends on my real life schedule. Now, before I forget:

Legendary Glitch of the Week:
It seems the fly cheat hates me - I died eight or nine times trying to simply fly over to the Visitor Center for playtesting!