The RT-2PM2 «Topol-M» (Russian: РТ-2ПМ2 «Тополь-М», NATO reporting name: SS-27 "Sickle B", other designations: RS-12M1, RS-12M2, formerly uncorrectly RT-2UTTKh) is one of the most recent intercontinental ballistic missiles to be deployed by Russia (see RS-24), and the first to be developed after the dissolution of the Soviet Union.

The Topol-M is a cold-launched, three-stage, solid-propellant, silo-based or road-mobile intercontinental ballistic missile. The missile's length is 22.7 m and the first stage has a body diameter of 1.9 m. The mass at launch is 47,200 kg, including the 1200 kilogram payload. Topol-M carries a single warhead with an 800 kt yield but the design is compatible with MIRV warheads. According to chief designer Yury Solomonov, the missile can carry four to six warheads along with decoys. Its minimum range is estimated to be 2,000 km and the maximum range 10,500 km. It has three solid rocket stages with inertial, autonomous flight control utilizing an onboard GLONASS receiver. It is reputed to have the highest accuracy of any Russian ICBM with a CEP of 200m.[12] The body of the rocket is made by winding carbon fiber.The Topol-M may be deployed either inside a reinforced missile silo or from an APU 15U168 launcher mounted on the MZKT-79221 "Universal" 16-wheeled transporter-erector-launcher. This mobile launcher is capable of moving through roadless terrain, and launching a missile from any point along its route. The designation for the silo-based Topol-M missile is believed to be RS-12M2, while the mobile version is RS-12M1. 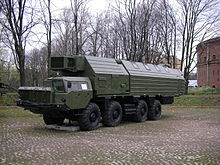 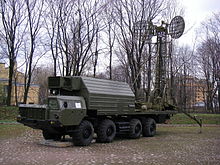 The first stage has three rocket motors developed by the Soyuz Federal Center for Dual-Use Technologies. This gives the missile a much higher acceleration than other ICBM types. It enables the missile to accelerate to the speed of 7,320 m/s and to travel a flatter trajectory to distances of up to 10,000 km.As a solid propellant design, the missile can be maintained on alert for prolonged periods of time and can launch within minutes of being given the order.

The development of the missile began in the late 1980s as an evolutionary upgrade of the RS-12M Topol (SS-25 'Sickle'), and the missile was redesigned in 1992. The first flight test took place on December 20, 1994. Experimental combat duty with 2 missiles in December 1997, the first regiment with 10 missiles in 30 December 1998, second in 1999. Silo launcher Topol-M entered service by presidential decree in 13 July 2000, the third, fourth and fifth regiments entered service in 2000, 2003 and 2005. The last regiment will arrive in 2012.On December 12, 2006 the first three mobile Topol-M missile systems entered duty with a missile unit stationed near the town of Teykovo.By the end of 2010 the Russian Strategic Rocket Forces operated 70 Topol-M missile systems including 52 silo-based and 18 mobile systems. A further 8 missiles were to join the Forces by 2011–2012. In 2020 the RVSN are likely to be equipped with 177 Topol-M (mobile and silo-based), as well as 30 UR-100NUTTKh (SS-19) and 108 RS-24 "Yars" (SS-29), in nine divisions.Current Strategic Rocket Forces Order of Battle lists the following sites with Topol-M missiles:

The Topol-M missiles have a lifetime between 15 to 20 years.

According to Russia the missile is designed to be immune to any current or planned U.S. missile defense system. It is claimed to be capable of making evasive maneuvers to avoid a kill by interceptors, and carries targeting countermeasures and decoys.One of the Topol-M's most notable features is its short engine burn time following take-off, intended to minimize satellite detection of launches and thereby complicate both early warning and interception by missile defense systems during boost phase. The missile also has a relatively flat ballistic trajectory, complicating defense acquisition and interception.According to The Washington Times, Russia has conducted a successful test of the evasive payload delivery system. The missile was launched on November 1, 2005 from the Kapustin Yar facility. The warhead changed course after separating from the launcher, making it difficult to predict a re-entry trajectory.