Rotten To The Corps - Part 1, featuring the basic units of the Marine faction.

First of all, before we get started, I personally would like to apologise for the huge delay in the release of information, but I do intend to keep my promise that more and more updates will stream over the next few months during the holiday season.

Let us begin the coming weeks with a big update focused solely on the US Marine Corps. First up, we have your average Marine squad. These men will be able to grab a Trenchgun or a Flamethrower if your willing to pay for it. Otherwise they'll just keep their designated rifles (M1 Carbines + M1 Garands). 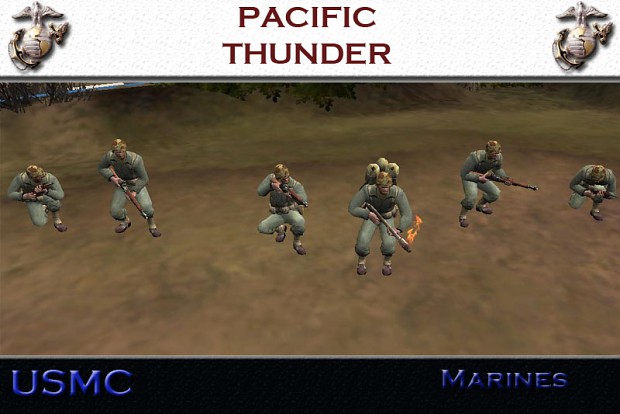 Next up we have the guys that are gonna build the Marines their beds. The Construction Battalion, a.k.a SeaBees. These battle hardened soldiers will have their M1 Carbines ready and are willing to fight, but just make sure you don't manage to run them into any Japs on their own. 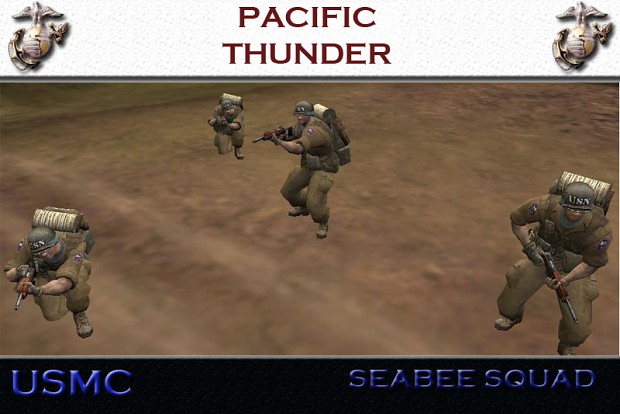 So how about the Support Teams? Wont the Marines get any additional support? YES! In fact here is a number of those teams. The Mortar Team, the Bazooka Team and the Machine Gun Team. 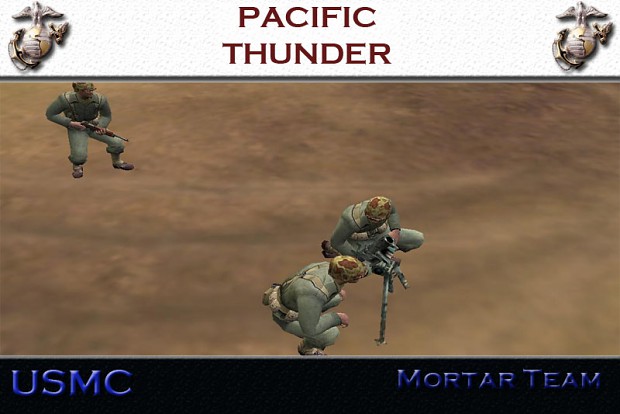 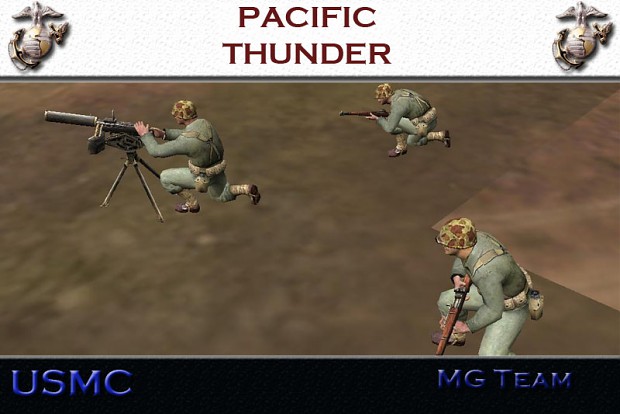 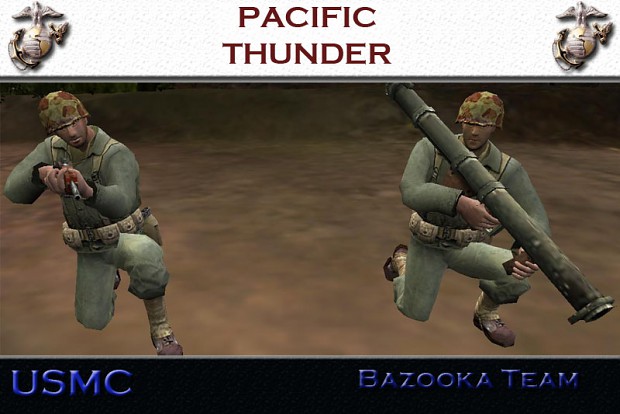 Oh and Last but certainly not least, the Sniper Team. 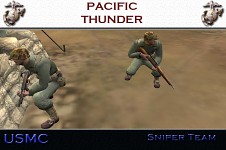 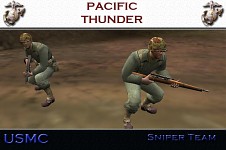 Remember, All Skins are WIP and subject to change.

And one final announcement we would like to make - Pacific Thunder will be fully compatible with the original Company of Heroes factions, meaning you can have the Marines fighting the Wehrmacht and any other combination you try to think of.

So thats it for todays update, stay tuned for more in the coming weeks where there will be plenty more shown from both sides of the Theatre

Nice to see an update on such a great mod idea. keep going dawgs

awesome pics im really looking forward to this mod... any idea of when it will be available to download?

Great to see an update from you guys :) only criticism is that...well, the main uniform seems too pale. I always remembered them being either light green, a tan-ish color, or have the same pattern as their helmets :X

But either way, good work. Hope to see more updates in the future!

This depends on witch Time of the Pacific Campaingn the Mod took place. The light olive pattern was used by the USMC till early 1943 and afer that still on some specific Campaign Theathers. After that it was mostly the camoflage pattern used on their helmetcovers or a Camo made of dots from diffrent sand and brown collours. like it is seen in many movies. The light olive pattern was later reused in the Korean War and even in early Vietnam stages and of course in Garrisons or in Boot Camp.

"Exactly, we are trying to portray the different uniforms used in this mod like this.

For example, the basic Marine Units which you can recruit, are dressed in the light olive pattern with the camoflauged helmet.

However when you reach the Veteran Marine Squad (truly badasses) and other Higher Band units, they will be wearing the full Camoflauge pattern."

maybe a cool idea is as squads gain veterancy their uniforms become more tattered and theyre dirtier and things like that,like people looked in real life after a long time in the front lines.

what game could this work?

Sweet Marines,What do the Japs look like? And the Marines used those DUKW transports and they also used regular trucks.

Looks great so far
But would't it be cool if the marines would look a bit more different and wouldn't just wear all the standat uniform?
for example sometimes without helmet or some kind of stuff like munition belts etc... on?
just like in cod5 world at war for example?
but still a good job!
can't wait to see more pictures

great work! it would be sweet if they could ride tanks,hint,hint.lol.

Nice! Glad to see this mod is going along pretty well. Cant wait to see the other USMC units! Oh, and out of curiosity, are you still keeping the straifing and bombing runs from vanilla COH?

We have some interesting ideas in mind for those kind of abilities, so stay tuned :p

There should have been an expansion that adds Russian,marines, and Japs.

Think if you could mix this with "Eastern Front" mod?

Keep up the great work, really getting that 'pacific' look on them now.

Awesome, we have an update! Keep it up guys, also, a question, are you guys going to be maping, or will it be a community thing, like the Eastern Front?

maps for pacific specific style of play will need to be done by us for code reasons.but things like jungle warfare will be able to be done by the community should they wish

What do u mean by specific style of play?

The Marines and the Japanese will need to depend on Infantry far more tactically, and maps which we wish this to be made the style will be made by us. However, the community will be able to make any type of maps they wish.

does that mean like jungles and other scenarios where there isnt room for tanks? im still kind of confused

maps that will involve island hopping and amphibious transports/units will need to be done by us. thats what i meant by specific style of play.

i plan to get it sorted. i'll be looking into scripted maps to see if i can get a few MP skirmish scenarios working. at present i havent got the AI function working properly (humans can still play, comp will just stand there and do nothing). however i hope to have something along the lines of the landing at wake island playable by release, so its not restricted to human vs human online/lan

Yeah, or for instance very close quarter roadways, where tanks cant drive down, but jeeps can. Basically, areas so that the Infantry are needed to win, but then on the outskirts you have flanking positions which the Armour will dessimate.

Ok. But for scenrios like say Okinawa or other places with larger open spaces what will that kind of battle look like

how about for specelists (like stormtruppon but for americans in pacific thunder) Veterens from the eroupein theater?

mainly because by the time the Allied Europe Invasion had begun. American, British, Australian and many other nations had already been fighting for 3 years in the Pacific/Burmese theatres of War. So Veterans would only be likely to be seen from the North African and Italians theatres, or Royal Navy, RAF and Commando squads fighting since 1940 in the Atlantic/Channel