An ancient gold ring thought to have inspired JRR Tolkien to write The Hobbit is on display at a Tudor house.

The ring, which is inscribed in Latin and has been linked to a Roman curse tablet, is being exhibited for the first time at The Vyne, in Hampshire.Archaeologist Sir Mortimer Wheeler is believed to have discussed the ring with Tolkien after realising its connection to the curse.It was found in a farmer's field in Silchester in 1785.The ancient artefact is also inset with an image of the goddess Venus, and lay forgotten in the library of the National Trust property for several years.'Incredible story'It is believed Sir Mortimer asked for Tolkien's expertise in 1929. Tolkien was Professor of Anglo-Saxon at Oxford University.The ring has been linked to a curse tablet found at the site of a Roman temple dedicated to the god Nodens in Gloucestershire.Tolkien worked on the etymology of the name Nodens and repeatedly visited the temple.His fantasy novel The Hobbit was published in 1937. The "One Ring", which plays a central role in Lord of the Rings, is also gold and contains an inscription in a fictional language called the "Black Speech of Mordor".A "Ring Room" has been created at The Vyne in association with the Tolkien Society.A spokesman said it told the "incredible story of this ring, the Roman tablet inscribed with a curse on the man who stole it, and its fascinating connections with Tolkien." It is larger than average, weights 12 grams, and is believed to date from the 4th century. 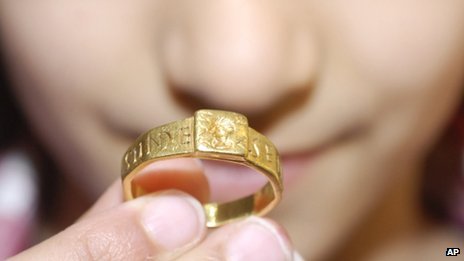 the ring bearing the Latin inscription "Senicianus live well in God. A tablet found at a site in Gloucestershire known locally as Dwarf's Hill bore an inscription that revealed that a curse had been placed on the golden ring. Said The Guardian: "A Roman called Silvianus informs the god Nodens that his ring has been stolen. He knows the villain responsible, and he wants the god to sort them out: 'Among those who bear the name of Senicianus to none grant health until he bring back the ring to the temple of Nodens.

Very interesting. I know that he had built the world of Middle Earth many decades ago- however, perhaps such a ring gave him a storyline for a novel.

This is quite interesting.