The main actors of Cogmind--what to expect from robots and how they fit into the game's design.

Cogmind is a game about robots, so it's about time we talk about them (finally!).

It's taken quite a while to get to this point because robots are built upon the game mechanics and items (and to an extent, the story), so holding off on this central element enables us to consider the full range of options when designing them. In a few special cases items were created to support a specific robot concept, but plenty of unique robots emerged from the existing item set given the huge range of available parts. And I don't mean superficially "unique" as in simple stat modifications like "extra +2 damage here!" or "more armor on that one!" Enemy robots differ significantly in their loadout and behavior, and will thus require different tactics to deal with.

Last week I finished off a majority of the designs and data entry for the new robots in order to continue pushing ahead with world building, a process which got bogged down with unknowns in the encounter system (since we didn't have all the robot designs in place yet).

Anatomy of a Robot

All robots are composed of a "core" and any number of attached parts. A robot is destroyed by destroying its core, which may even require only a single hit in some cases, though it's more difficult to hit a core while it's covered by parts. You often end up destroying some parts first, causing the robot to lose whatever functionality those parts were providing. 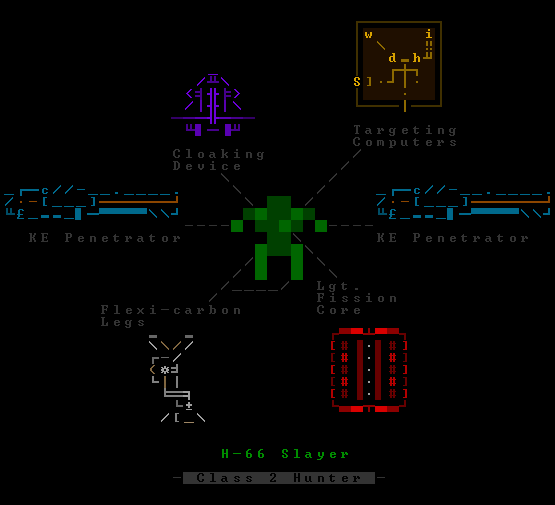 A mockup blueprint for the H-66 Slayer, a class 2 Hunter robot. ASCII art shown for parts is that for the various parts from the game, but there are no composite images like this one in game. (No art or visualization is planned for robots; I put this together specifically for this post, drawn in REXPaint.)

Note that although it would seem more realistic and even add greater tactical options, you cannot target specific parts, as that would make the game too easy--just disarm everyone, or target their propulsion system and run away! (Solutions such as making weapons more difficult to hit/destroy would imbalance the part systems.)

The core+parts system is no different from yourself, the Cogmind, as all robots follow the same rules. From an implementation perspective this is usually the best way to go about handling the player in a roguelike (it's also much easier to balance a game in which more of the content is directly comparable, rather than asymmetrical). With Cogmind in particular, it allows for much tighter game design since you can cannibalize other robots for parts. Any of them. If they can do it, so can you. This even applies to some of the very interesting special effects.

Base Classes and Subvariants

I'd rather leave most of the content to player discovery, but seeing as the prototype has been in the wild for a while and played by many, I'll use that as a starting point for the discussion.

Essentially I've imported all the same base classes from the 7DRL:

Each class has its own ASCII letter, 'w' for watcher, 's' for swarmer, etc., using upper case for any that are considered "large" (easier to hit), e.g. 'Y' for sentry, 'B' for behemoth. Actually, this time around you'll also find that a few really large robots even occupy multiple spaces, like the behemoth (four spaces--a 2x2 square; read more). Fleeing through a narrow corridor or doorway is now a valid way to escape them :)

Several sub-variants exist for each of the classes where better variants are constructed from similar but better parts, and often lead squads, if applicable, or simply appear on later levels. There are on average three variants per class, distinguished by color on the map, and of course by name everywhere else. Taking the watcher as an example, early in the game they appear as the W-16 Scout, then later on as the W-25 Informer and W-44 Eye. The prefix before each robot name tells you 1) the class (letter) of the robot and 2) their relative threat level on a scale from 1~99. Watchers themselves cannot harm you, but are dangerous because they'll attract much more unwanted attention. Beware higher numbers.

Cogmind doesn't belong to any class--you're obviously not quite like them, a premise explored by the story.

Named NPCs are all unique robots as well.

In addition to the above list, there are eight new base classes for combat robots. The cool thing is none of them use normal "guns," i.e. it's not a case of simply adding many more shades of "attacks for X damage." Thus much of the expansion since the prototype has been in terms of variety, not simply expansion for expansion's sake.

True roguelike design should embrace elements and content that promote new interactions and emphasize tactical differences rather than the grindy hack-and-slash of your average RPG. While Cogmind has its fair share of numbers and stats to pore over, in the end I want the game to be more about strategic calculation, not mental math with stats. You don't have to worry too much about the details, just be sure to put yourself in the right position and make choices that reflect what you're best at and you'll generally come out ahead. When playing the 7DRL I could do quite well without closely examining all the stats, instead simply using the highest-rated parts I could find and basing my decisions/actions on the strategy most suited to those types of parts. This will no doubt frustrate some players who do want to calculate everything in detail. (For that there is an optional console to see a breakdown of every attack calculation, if you must.) One advantage of this kind of design is that it makes the game a lot more accessible than it might otherwise appear. [/aside]

Back to the new classes... I won't list them here, but know that there are robots with a melee focus, or a special kamikaze-like attack, or who hold you in place and study your composition and loadout (for devious purposes, mwuahaha), and more.

There were plans to include at least one kind of "support" robot in the 7DRL, but they were cut due to time restrictions. Now they're definitely in, and there are a few different classes. Support robots have no combat capability of their own, but serve to boost or assist allies in some way. Gaining them as followers is a good way to improve your own survivability without attracting the attention that raising an army of lethal robot killers would ;)

One thing you don't often see in roguelikes, or at most only in small numbers, are creatures that don't have an impact on combat. On one hand we can attribute this to the premium on letters and map space in ASCII roguelikes, as well as the genre tendency to minimize "fluff" in boiling gameplay down to its most essential elements.

But Cogmind's setting is not your average dungeon in which every denizen is out for blood. It's a subterranean complex supposedly inhabited by a robot civilization of sorts, so even if just for atmosphere we need it to actually be inhabited. Fortunately we can always populate the maps with thematic robots that both have a purpose and serve as fluff.

You can already see this in the prototype (7DRL), with tunnelers excavating new areas, workers clearing debris, recyclers cleaning up the aftermath of a battle, haulers carrying parts around, builders reconstructing walls and doors... These robots will generally ignore you and go about their business.

Engineers at work, or "Hey! I just blew that up!" (Yes, they will seal you behind a wall if you are in the way.)

If you can gain control of them, you can also have them work for you doing whatever it is they normally do: carry extra parts, build walls to block off areas, dig new tunnels...

In a pinch, non-combat robots are also an easy way to farm parts. The parts won't be the best, but it's nice to know you can easily get access to at least a basic power source, or wheels, or utilities like a hauler's storage unit, a recycler's tractor beam, a tunneler's seismic analyzer, a builder's structural scanner, etc.

Destroyed robots leave behind salvage, which comes in two forms: matter and parts.

The ambiguous "matter" is used as the ammo for ballistic weapons and most explosives, as well as a resource consumed to attach new parts (fuse/link them to the core). The amount of matter remaining when a robot is destroyed depends on its class and what weapons it was hit by (not just "destroyed by"--it's a cumulative effect). Blasting robots to pieces with explosives will leave much less salvage than pinpoint targeting with lasers, or even better, corrupting the target's system with EM projectiles. This is one way for the game to limit the use of explosives (besides the obvious "he's using explosives send in everything we've got!"), since powerful explosives require a lot of matter to use, but in turn you'll receive less matter for using them too frequently.

Parts dropped by destroyed robots will usually be somewhat damaged, but are nonetheless a great way to to augment (or at least restore) your capabilities after an encounter. This is pretty much required, actually, since you won't always find enough stockpiles of fresh parts when you need them. Nor is there unrealistically dropping of random parts from robots--they can only drop what they themselves use (and still have at the time of destruction). Thus with only a few special-purpose exceptions, all robot designs are static, enabling you to know what to expect when confronting a given type of robot, and also hope that certain useful parts will survive their destruction. I love taking cloaking devices and targeting computers from downed hunters (see first image), and I almost always track down a hauler early on to expand my inventory capacity.

Static robot designs help solve a common problem with roguelikes: relying entirely on random drops (which are usually not type-weighted in any way) can have the player feeling like they are completely at the mercy of a merciless RNG in terms of loot. Like that wizard who just never seems to find a staff. Randomness is good, but not when you have zero control over your destiny and it happens to kill you by denying access to fundamental items. Shops are occasionally used as a way around this (giving you a choice of items from among many), but that's only half a solution because their stock is still random. This is really more of an issue in games that have a huge range of potential items, and Cogmind is one of those games, so I like that the player has a semi-reliable way of obtaining essential parts.

The gif of the repair robots fixing the hall was definitely a cool sight to see.

Thanks, I like to emphasize that the world is *not* just full of enemies and combat--there are plenty of other things going on that make it seem more alive and realistic! More recently I added even more fluff like this, giving even some of the semi-combat robots logical things to do when they aren't alerted to hostile robots.