A detailed description of the changes to gunpower units in Roar of Conquest.

Greetings! Today I will talk about the changes I have made to gunpower units in Roar of Conquest in comparison to Stainless Steel 6.4. Now when I talk about gunpowder units, I am not referring to artillery units, only infantry units armed with powder weaponry. I have not as yet made any changes to cavalry units armed with these glorious, explosive weapons, as I have not seen any need to change them; however, if any person wants to make an argument for them to receive changes, feel free to post your comments below and I will take them into consideration. Now, enough with introductions; on to explosions!

Changes to Gun Units: Are They Worth Recruiting?

Like many of you who are reading this article, I have a great deal on fondness for Stainless Steel; after playing the mod, I found it impossible to ever play vanilla Medieval II ever again. However, the mod had it's flaws. One such flaw was the men with the boom-boom sticks.

Now, even the earliest gunpowder units do not become available until you are well into a campaign for any faction; the earliest you can get the most rudimentary units is at year 1300, over 80 turns into the campaign, and for some factions it is even longer. I remember my first time playing a Leon and Castile campaign with Stainless Steel; I was excited to get the late-game gunpowder units like the Arquebusiers and try out some Pike and Shot style warfare. After playing over 200 turns into the campaign, I finally get them, and what do I find? Well...they stunk. Like really, really stunk. I found that even peasant archers were a better range unit than them, it was that bad. 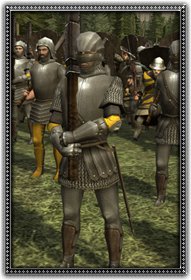 I was a sad Sicilian that day, let me tell you. So, what was it that made gunpowder units in Stainless Steel so damn bad? Well, I did a little bit of digging, and found the answer. It wasn't their terrifying, armor-piercing missiles that reduced enemy morale on impact; it was their abysmal range!

Turns out that the original modders in Stainless Steel drastically reduced the range of all powder infantry. What's wrong with that, you may ask? Simple. Any of you lovely readers who have played Medieval II or any of its mods will know that gunpowder units have a lengthy firing animation. The time it takes powder units to load, aim, and then fire is long. What I found was happening was that, because of their short range, powder units would get off maybe one volley before enemy infantry closed into melee. Yes, infantry, not cavalry. Even heavy infantry could close the distance fast enough to nullify powder range play. And, since you can't fire over the head of your infantry like bowmen, it meant you got off one volley, (if you were lucky), into the advancing enemy forces, and then they were useless for the rest of the battle. As I said, even peasant bowmen were more effective than powder units. The solution, of course, was simple; extend the range of all infantry gunmen. For reference, early units like Handgunners have the range of javelin units, and Arquebusiers and Musketeers have the range of early-tier bow infantry. Now these units can get off several volleys before enemy infantry close in with them. This change was for all infantry gun units, including mercenaries.

So to answer the question I posed, yes, gunpowder units are well worth the recruitment once you can get them. You still have to work to protect them, but they can now make their money's worth by ripping off several fear-inducing volleys of lead that chew through even the toughest armor in the game. It was simply a manner of making them able to get off several rounds before being forced to retreat. So there you go, the changes to gun infantry in Roar of Conquest from Stainless Steel 6.4! If you like what you see and are interested in playing the mod for yourself, the link can be found here: Moddb.com Now, go forth and blast thine enemies! :)