A detailed description of the changes from Roar of Conquest 1.1 to 1.5.

Population Requirements for Cities and Castles

I have adjusted the mod so that it is now easier to upgrade to Huge Cities and Citadels in the game. Back in Stainless Steel, it was practically impossible; but with my changes, Huge Cities and Citadels will be common across the campaign map by mid to late campaign. The goal behind this change was to make it easier for both the player and the AI to upgrade their settlements in order to get to their best units, thus making elites more common across the map. In my mind, it's no fun to dangle excellent troops in front of the player and then make it impossible to recruit them. It should also make playing against the AI more interesting, since they will be throwing better troops and armies against you, especially in the mid to late campaign.

While I won't bore you with the particulars of modding, I feel people should be aware of the changes made, especially since these problems would have undoubtedly been found and reported by someone at some point. Think of this section more of a, "I fixed it now" section, if you will. These errors were part of the original Stainless Steel mod, for those of you who were curious.

1. Lithuania had a serious scripting error with their castle Barracks recruitment that caused many of it's units to disappear after the Half Plate Armor event (year 1310-1330), including units such as the Lithuanian Late Spearmen and Lithuanian Regular Swordsmen. That has been now fixed so that you, (and the AI), can recruit these units properly. 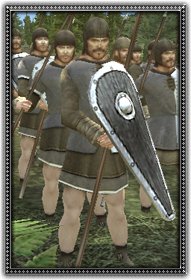 3. The Byzantine Empire also had an error in their city Barracks, although this was really a lack of script problem. Before, if the Byzantines captured and enemy city with the Army Barracks in it, the building would be completely useless; they would not be able to recruit any of their units from the Army Barracks at all. The only way the player or AI could then recruit units from said city would be to demolish the Barracks and rebuild it from the bottom up, starting with the lowest-tier city barracks building, the Town Watch. This problem has been fixed; while the Byzantines still cannot build the Army Barracks on their own, they can make use of one if they capture a city with it.

I have now changed it so that practically all factions in the game now have access to a basic light cavalry unit from their Stables line no matter where they are on the map. In addition, I changed a few medium-tier cavalry to be recruitable everywhere for their respective factions.

1. As just stated, most factions now can recruit one type of light cavalry from the Stables no matter where they are on the map. For most factions, this unit is the humble, (but still useful), Mounted Sergeants. For other factions, it is their Mounted Sergeants equivalents, such as the Magyar cavalry, (Hungary), Border Horse, (Scotland), Hobilars, (England), Turkoman Cavalry, (Seljuk Sultanate), and so forth.

2. The Ippotoxotai are now no longer restricted by area of recruitment, or AOE. These horse archers will now make the enemies of the Byzantines miserable, no matter where the faction is on the map.

3. Granadine Jinetes are now available everywhere for the Moorish Caliphate. These javelin cavalry will now rain terror on their foes across the campaign map.

As most of you might have noticed by now, the original Stainless Steel mod had a system were certain units did not become available until after a certain event trigger, which many people, including myself, felt helped to make the campaign more interesting. However, the waiting times for some these units was absolutely staggering, and in some cases actually made the campaign unbalanced, as certain factions got to recruit their hard-hitting elites 100 turns before their neighbors could, making the campaign especially lopsided in AI vs. AI conflict. While some of these changes were done in the name of balance, others were done so that the player would not have to play 300+ turns in the campaign before getting to their faction-unique units. Balance was kept in mind and prioritized for these changes as well.

1. Scotland can now recruit Highland Pikemen, Scots Pike Militia, and Heavy Pike Militia from campaign start. Of course, you will still need the appropriate buildings necessary to recruit them, (Heavy Pike Milita require Large Cities Barracks to recruit), but this change was done to help bolster Scotland, especially in the early campaign. As a faction, they hit hard, but are not particularly sturdy in the armor department in the early campaign, making them very susceptible to taking damage; think of a glass cannon, if you will. They also have no spearmen apart from the militia they get from cities. Now that they have their pikes, they can actually fight off enemy heavy cavalry. Scotland now has the unique position of being the first faction in the game to have access to pikes, helping to make them a bit more interesting to play.

3. Poland can now recruit Heavy Hussars after the Gothic Plate event, (year 1450-1460) instead of the Advanced Matchlock event (year 1580-1600). They also can recruit Polish Retainers for the whole campaign.

4. Portugal, the Kingdom of Leon and Castile, and Aragon can now recruit Spanish Arquebusiers after the Matchlock Developed event, (year 1420-1440), instead of the Portable Clock event, (year 1510). The way this changes works is that now, instead of them getting the standard Arquebusiers that all other European factions get after the Matchlock Developed event like they originally did, they now get the unique Spanish Arquebusiers from the get-go. This change was done so players could enjoy playing with the more unique unit earlier, as I saw no reason for there to be a longer wait for these units. It does mean these three factions no longer recruit the standard Arquebusiers, but I don't think anyone should be too broken-hearted. :)

6. Portugal can now recruit Pikemen and Aventuros after the Full Plate event, (year 1380-1400) rather than the Hammer of the Witches event, (year 1486) and the Spanish Inquisition event, (year 1481), respectively. As with Aragon and the Kingdom of Leon and Castile, these changes were made to shorten the waiting period for Portugal to get it's professional infantry units and make the faction a bit more unique. Now, all the Iberian kingdoms get an early start over most other factions in pike warfare. 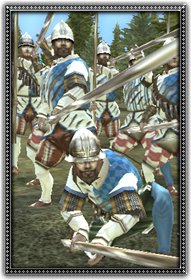 The Moorish Caliphate, the Fatimid Caliphate and Lithuania were all factions that I had previously left relatively untouched in my changes to make factions more balanced and ensure that they had access to basic units like spearmen and archers in the early campaign. Now, I have gone through and ensured that they are now on equal footing in this regard to everyone else. I also went through and tweeked the stats of some units that I felt under-performed to ensure that they were now of decent quality. I won't go into all the changes I made for all the factions,(I plan on giving these factions their own articles), but I will cover the factions that received some unit improvements that have already had articles written about them.

1. The Kingdom of Poland received stat improvements to their Piast Nobles and Polish Knights. Piast Nobles now have a defense of 17, and Polish Knights now have a defense of 21. These changes were done to make them more equivalent to their European counterparts, especially since Poland has a history of being famed for their cavalry. In addition, Polish Foot Knights have an improved melee defense of 21. 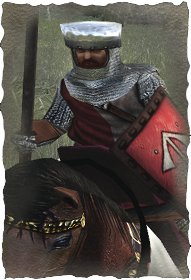 2. Tabardariyya for the Fatimid Caliphate now have an improved melee attack of 10. On top of that, Nubian Archers and Kurdish Javelinmen are no longer restricted by area of recruitment, or AOE, meaning the Fatimid Caliphate can now recruit a reliable javelin and archer troop no matter where they are on the campaign map.

3. King's Hirdsmen for Norway have been given a stat upgrade, now with 11 attack, 5 charge, and 24 defense, making them a very elite unit. They are also available for recruitment for the entire campaign.

Changes to Building Requirements for Recruitment

The biggest change people will find here is that all units that once required the Military Academy building in Huge Cities in order to be recruited can now be recruited in the Barracks building in Huge Cities. You still need a Huge City, but I felt that this change would help streamline the recruitment process. The units affected by this change are Gendarmes, Tercio Pikemen, Late Tercio Pikemen, and Mounted Arquebusiers. In addition, the Byzantines can now recruit Late Musketeers and Latin Handgunners from the Huge City Barracks once they are unlocked in the campaign.

Now, don't get too excited; I have not made brand-new units from scratch. BUT what I have done is added certain units to other factions in order to beef them up, and make them more interesting to play.

1. Scotland can now recruit Galloglaich from the Barracks in Castles. I did this to give Scotland a little more spice and another shock infantry option, since Scotland has one of the smallest rosters in the campaign.

2. Sicily has three, (yes, count them, three), new additions to their roster; Macemen, Broken Lances, and Broken Lance Cavalry. The Macemen filled a hole in their roster; unlike other European factions, Sicily had no medium infantry like the Light Men at Arms available to them for recruitment. The Macemen fill that hole nicely, and help give Sicily a little more differentiation from the other Italian factions. As for the Broken Lance units, I honestly could see no good reason for Sicily to not have these units; if Genoa and Venice can have them, why not Sicily? {Please ignore any bias on my part which may be indicated from having the Sicilian flag as my personal icon.} ;) But in all seriousness, these changes just help give Sicily a little more flavor and spice to their campaign. The best part is that when you recruit the Broken Lance units in campaign, they will have Sicilian-style armor and heraldry.

So there you have it, the change log for Roar of Conquest 1.5! As I said at the beginning, this version will release shortly after this article publishes, so there will be no long wait. For those keen-eyed readers out there, you will probably notice that there are two factions that seemed to be left wanting; the Cuman Khanate and the Shahdom of Khwarazm. Since these two factions start right next to the Mongol and then Timurid invasions, they simply die too early for any changes to make a difference...yet. And with that mysterious caveat, I bid you good day, and hope you will soon take to the battlefield in Roar of Conquest!