With the epic campaign drawing near, catch up on some exclusive behind the scenes, and updates about "The New Shadow"!

Since it's been about a year since the last major update, I think it's important to remind everyone what the next major update will entail. First, 5.05 will bring a complete visual overhaul to the Gondorians. Almost every single unit and building has been visually updated, and their units weapons/armour now upgrade with certain techs throughout the ages. There are also a few other unit model updates, including some Elvish units. Finally, there has been a handful of gameplay tweaks and balances, as well as a few upgrades to the AI's performance. I would have posted this update months ago, but I have held it up in preparation for The New Shadow Campaign. It's sheer size and attachment to this update was simply too much to warrant potential downloaders missing in a separate dl, and installing a campaign of this size would certainly be messy. 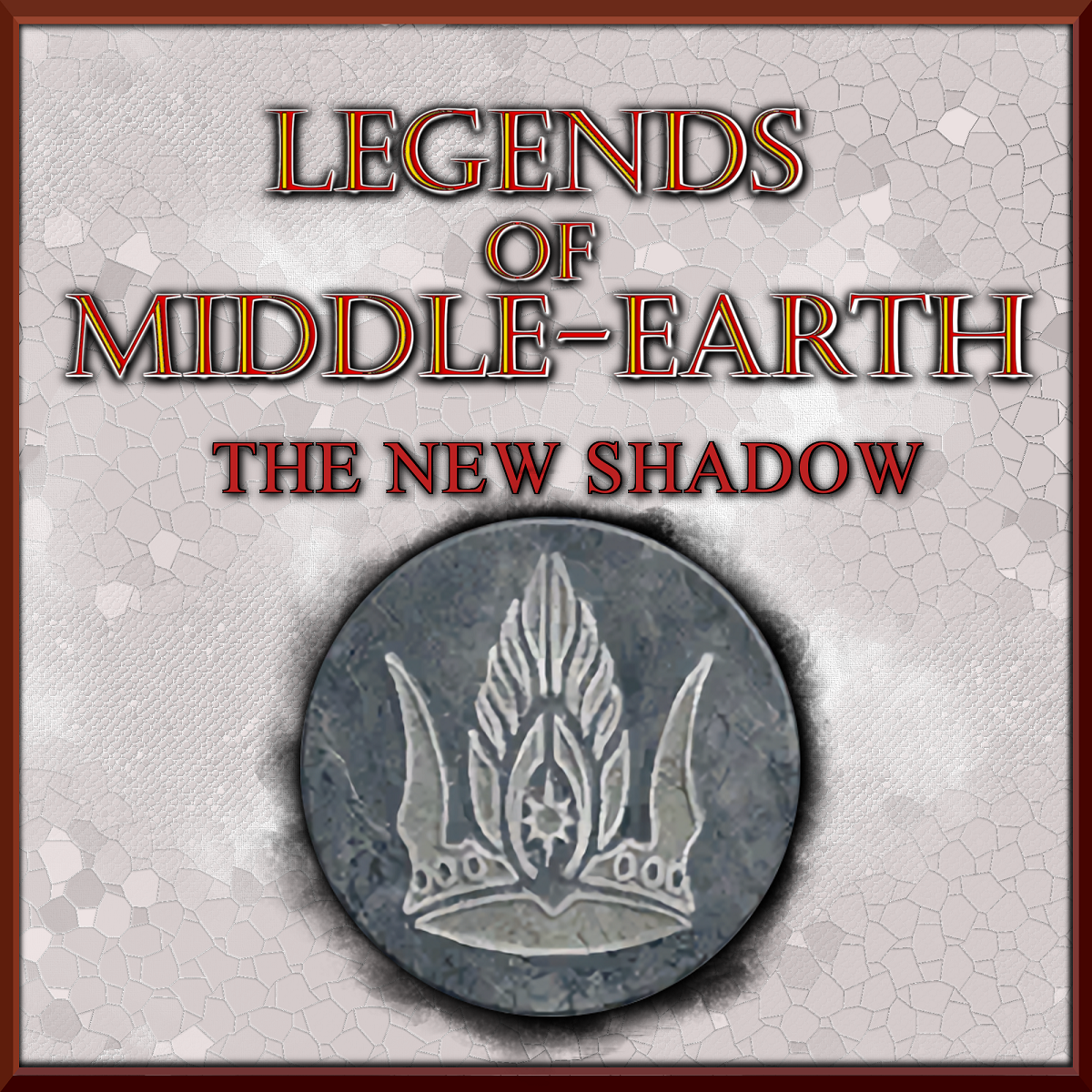 Logo Splash for the campaign

The New Shadow has been mentioned and alluded to for years, and during all this time it has been in development. The campaign has come and gone through many iterations, and is a reflection of everything I've learned about video game design and creation over the last few years. Every time I feel confident in what I've created for it, I discover a new breakthrough that completely changes my perspective on the direction of the models, locations, story, and more.

Over the course of the story, players will be taken through 13 levels, which range from RPG-esque designs, to full blown warfare RTS. Focusing on Gondor in the Fourth Age, players will explore sprawling environments that have rarely been touched on in Middle-Earth before, and meet characters who will twist and turn the story in unexpected ways, all with the help of the lovely NHawk (a very skilled and handsome scenario designer).

Most of these levels offers extreme replay value, as some levels will offer quest objectives in a seemlessly randomized way, which goes the same for dialogue. Some lines, and even character conversations may have the chance to be entirely different on a second, or even third playthrough, which keeps the experience fresher as you play the campaign over and over again. The New Shadow also has several collectables found throughout its levels, including "journals" which offer perspective from the characters on current events, or on things that have happened during their lives in the Fourth Age. Players who find them may be rewarded in several different ways. Bear in mind that the campaign is also fully voice acted with some stunning performances bringing the cast of peculiar individuals met in the story to life! 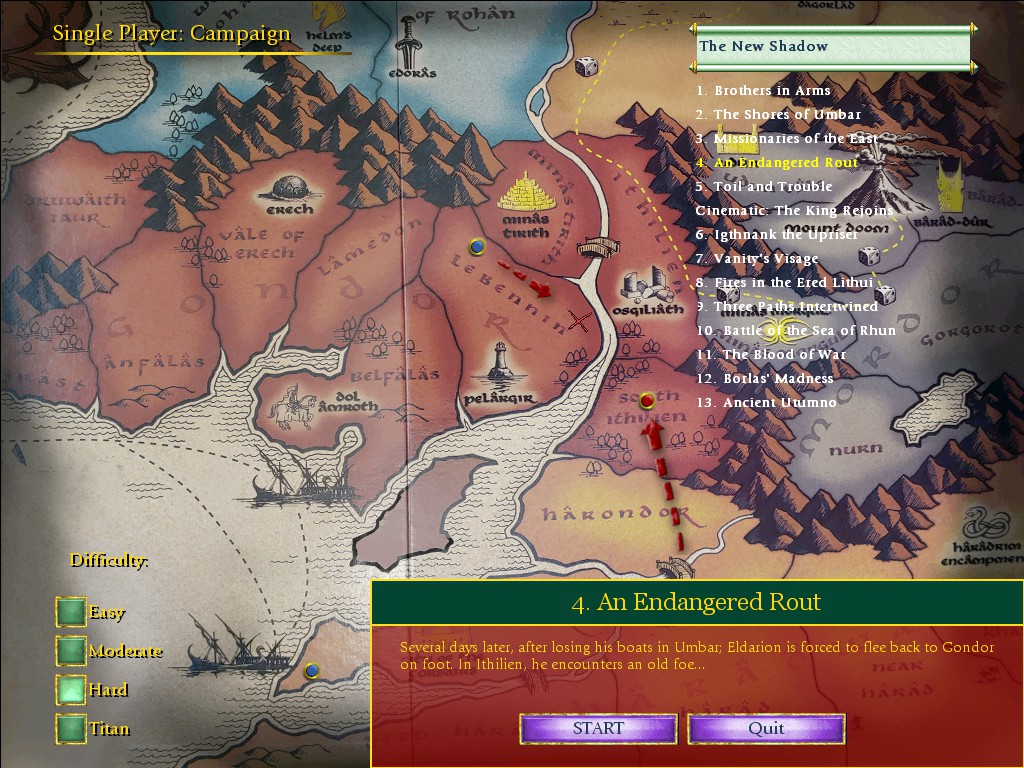 A look at the Campaign's menu 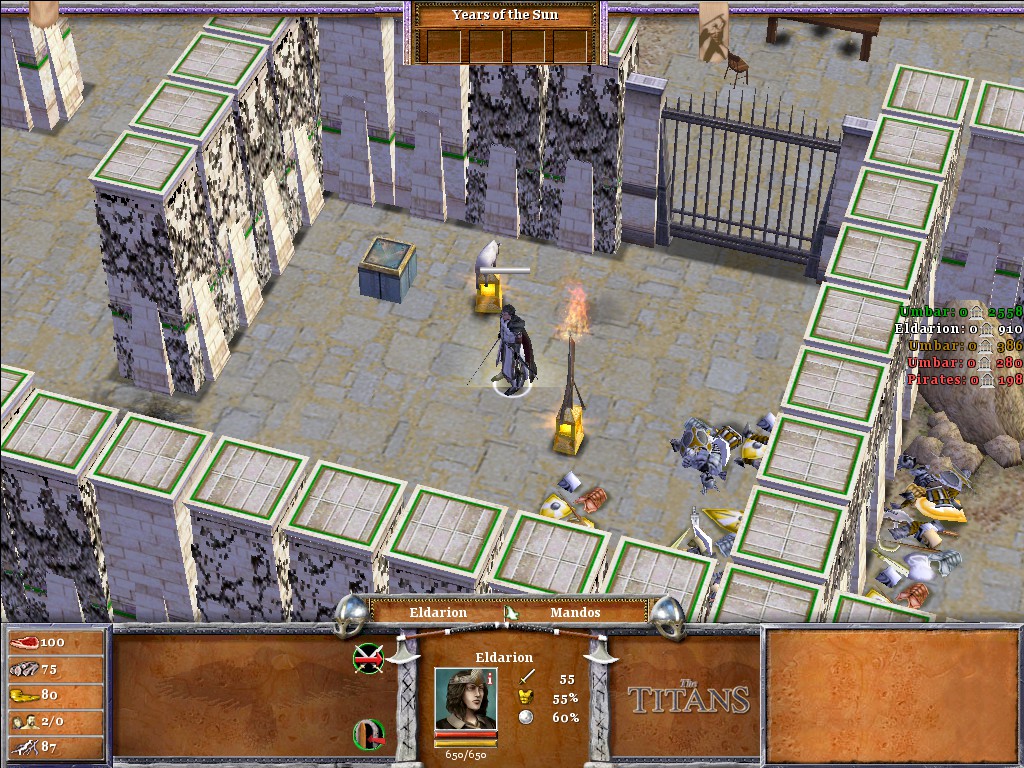 A level partly based in a puzzle solving dungeon 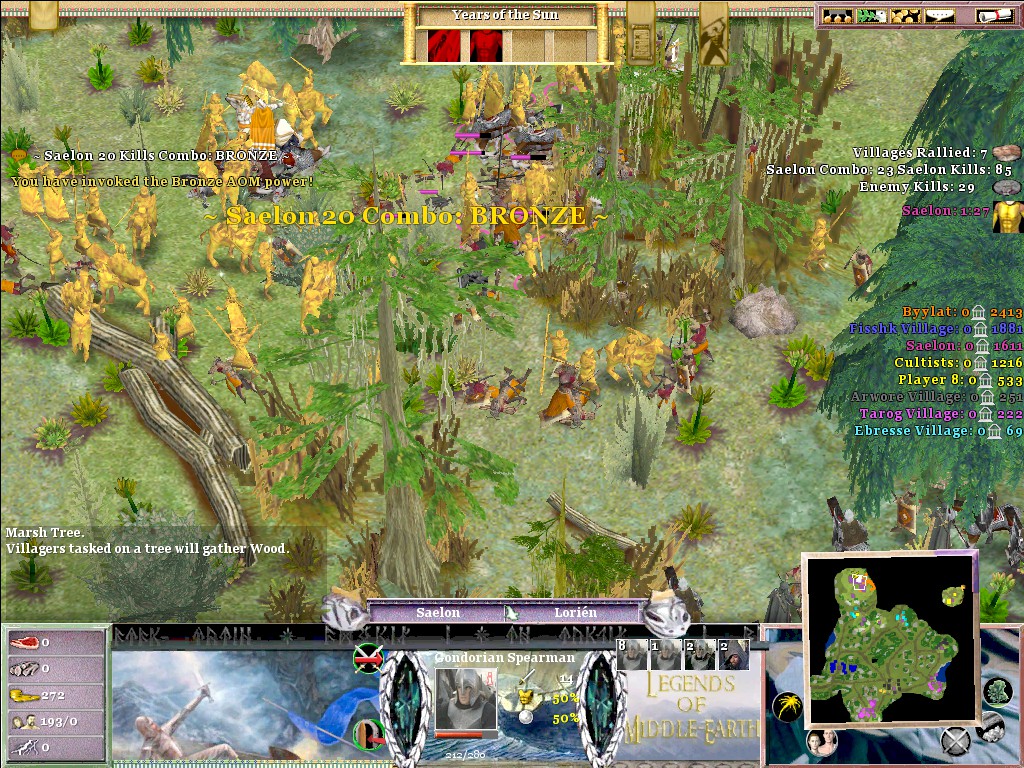 This level mixes tradition RTS with some "Tabletop" inspiration

Between each level is the AoM tradition of in-game cinematics. These cinematics have been meticulously crafted by hand to offer the best cinematic experience possible. Cinematic models of the characters have been made in high poly, and no animation is recycled, as every piece of animation is lip synched by hand, and the gestures and movements of the characters are built around them.

Along with being fully voice acted, these cutscenes are also originally scored, and recorded live in LOME's studio. No RTS cutscene has ever been quite like what "The New Shadow" has to offer. If you played "The Battle of Sarn Athrad", released as the first Silmarillion level with the last big update, then you've gotten a taste of what these cutscenes can offer. 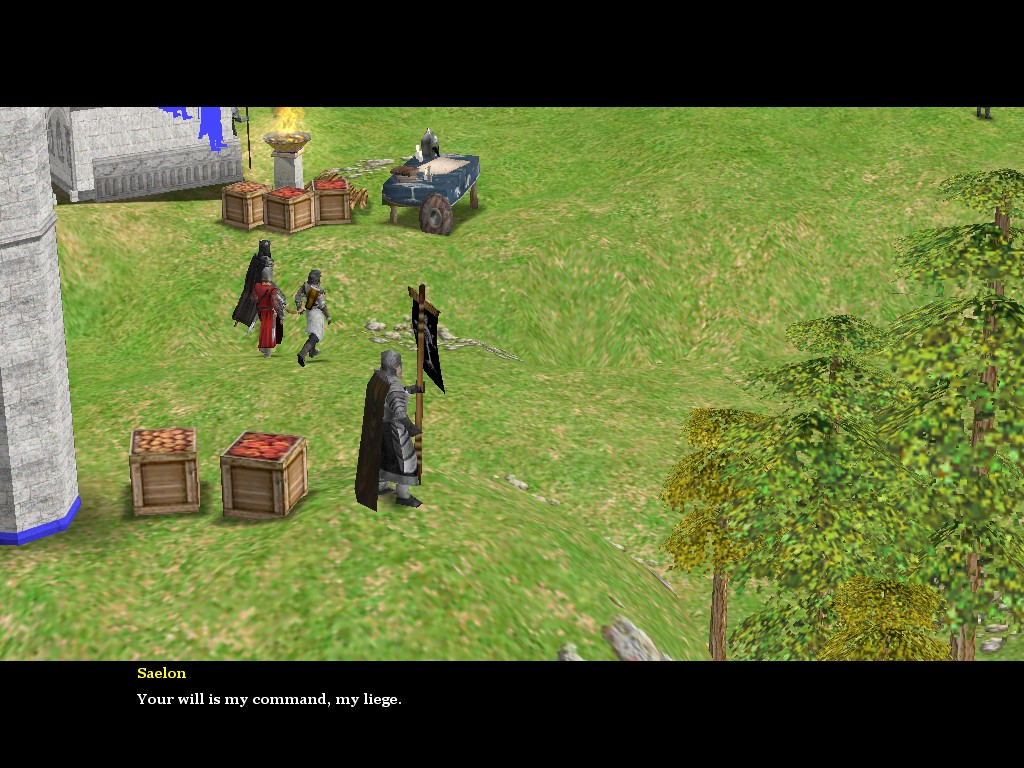 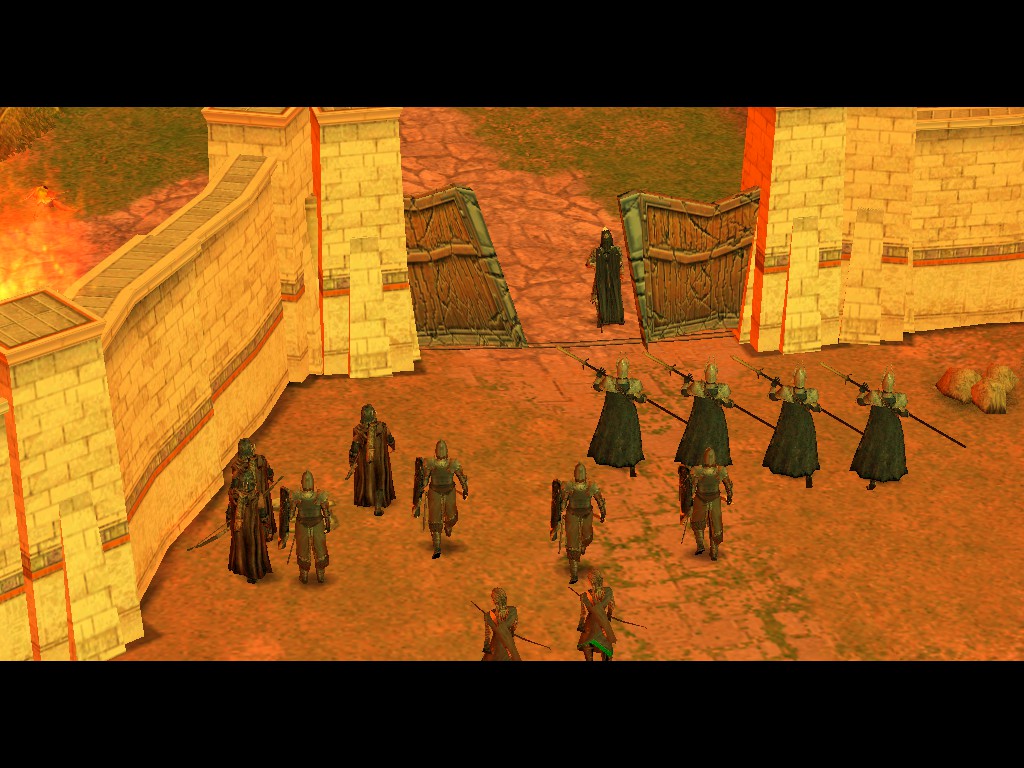 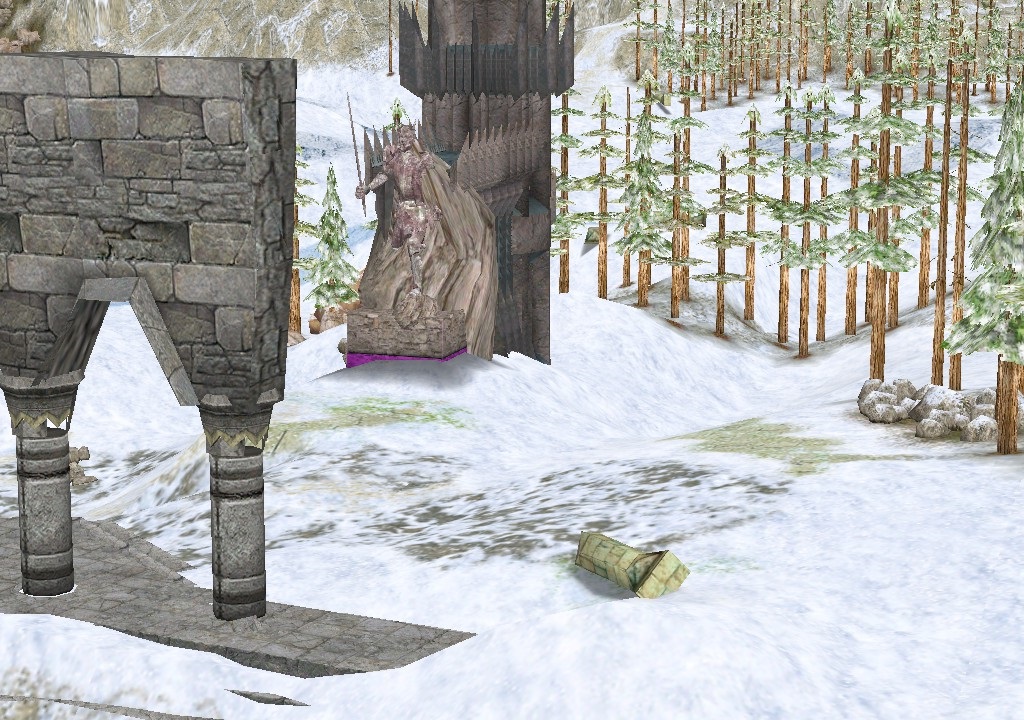 The New Shadow features hundreds of scenario exclusive models, units, buildings and technologies. It is not an exaggeration in the slightest, and an entire city has been uniquely modeled for its appearance in the campaign. Despite its specific creation for this campaign, I'm hoping inspired scenario designers find additional use after the campaign, one can always hope.

If you're interested in some further looks at how the New Shadow is made, then keep reading! Otherwise you can skip to the end of the article for the conclusion and more about the release date of the campaign.

Main characters aren't the only ones that have special attention given to them for the campaign. The Gondorian soldiers have gone through a lot of work to reach their final stage of appearance! 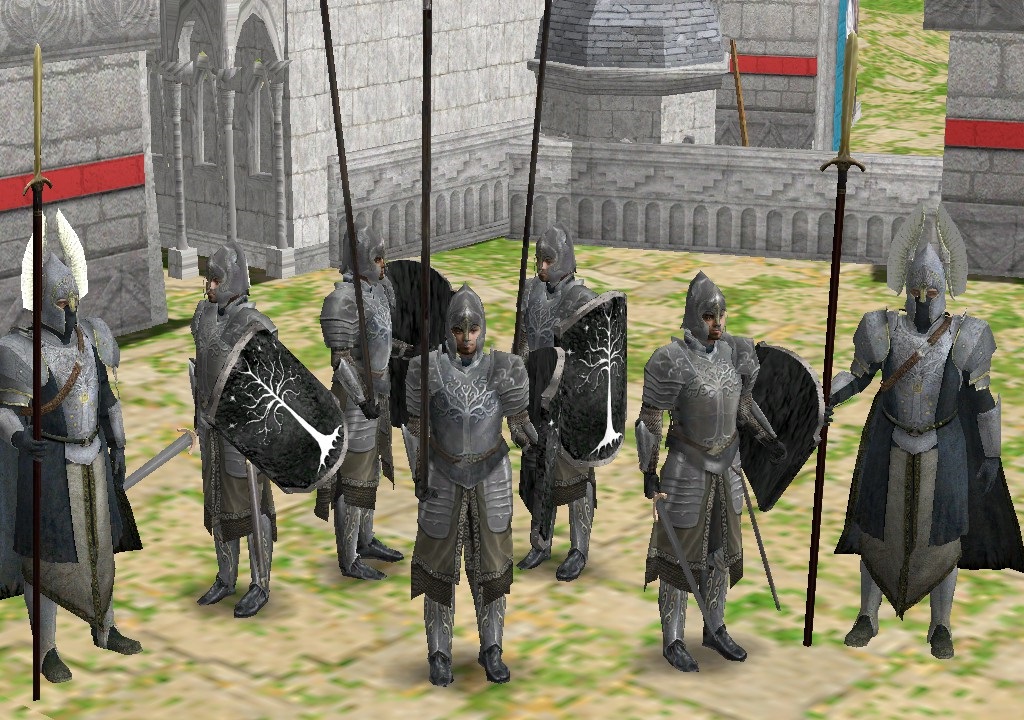 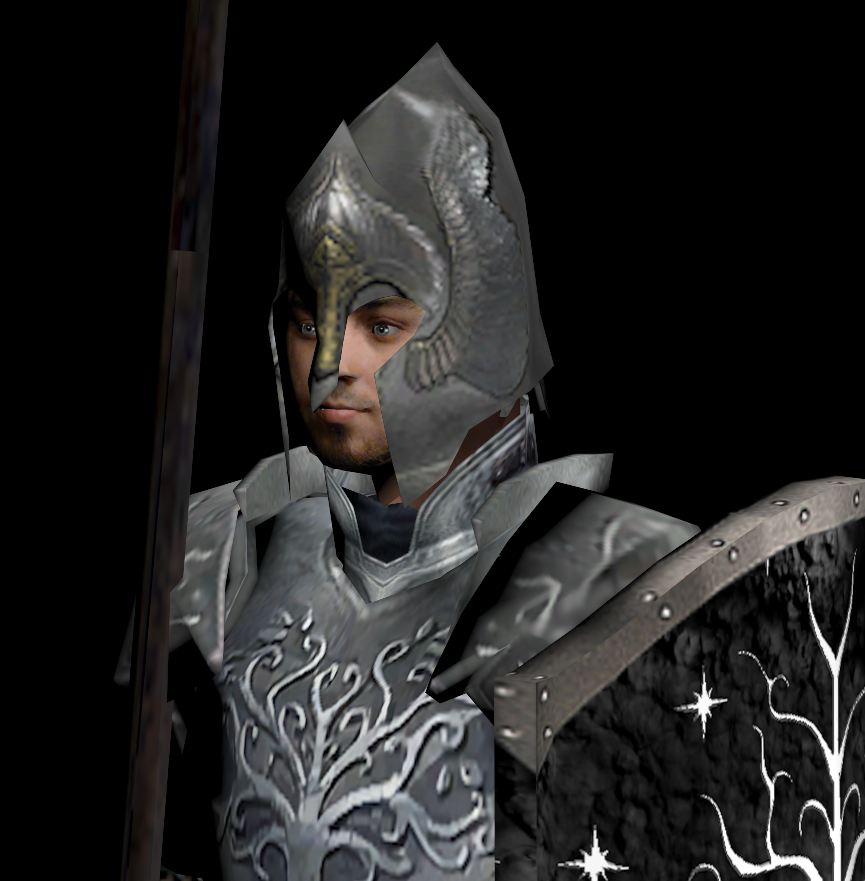 Through the power of LOME's new studio, I will be cameo-ing
as the Gondorian Soldiers in cinematics thanks to 3d scanning tech!

Over the summer this year, LOME (made by "Chiaroscuro Entertainment") has been building a brand new studio to create the game's look out of. Since I am a solo developer (With the exclusion of the highly talented NickonHawk scenario designer), a lot of this work has taken a long time to finish. LOME's new studio's primary function is motion capture animation, the act of the mapping a 3d skeleton to a moving person who is acting out in front of the motion capture camera. A lot of cinematic animation scene in The New Shadow is captured via motion capture, and then worked on to be put into the game. 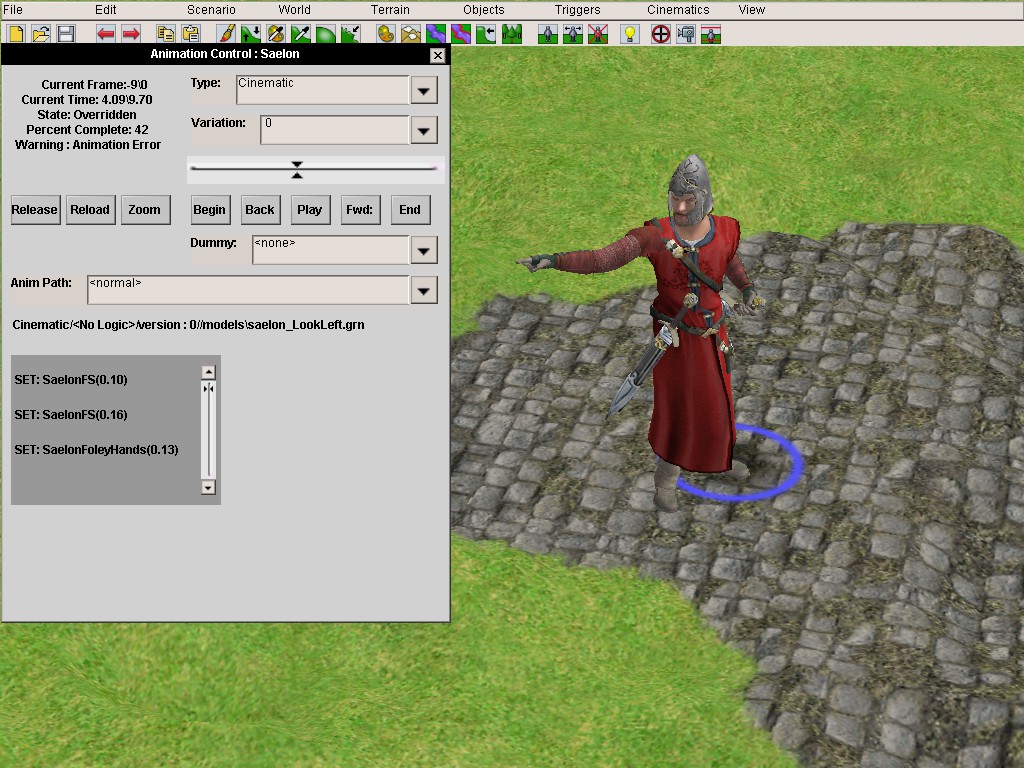 If you are interested in seeing more behind the scenes, I will be starting a video series exploring my new studio, and how it works to create The New Shadow. Hope to see you there!

Designing the characters of The New Shadow has also seen a lot of iteration. The designs began with originally using AOM's old cinematic models, meaning I had to work within most of the constraints of the 3d art that had been made already. This wasn't too big of a deal, since we had characters who had basic archetypes already in place (melee characters with swords, or ranged characters with bows). As I learned 3ds Max and the .GRN model format more, I was able to branch out. Saelon, in particular still retains his double swords carried over from the original "Fanatic" unit in vanilla AOM. Another character, Borlas, also retains his original bow from the Arcus unit. When playing The New Shadow, be on the look out for these little things, and other easter eggs! 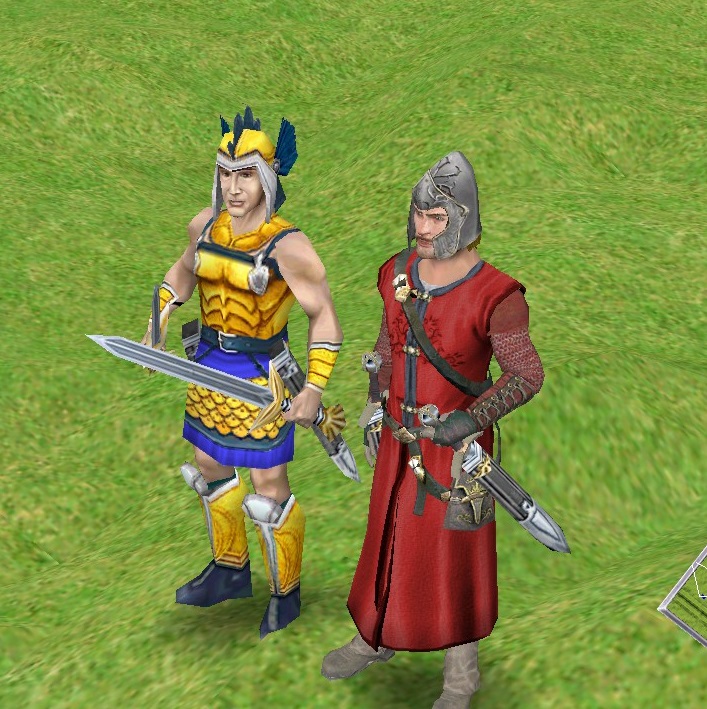 You can hopefully get your hands on The New Shadow (which will be released with the 5.05 mega patch) near the end of December, but that is best case scenario. It is possible that the development will lead into January, this is simply a consequence of how much time it takes to create the campaign and a patch like this. If you are interested in aiding the development cycle, you can offer direct feedback and report bugs. If you are a modder, you are welcome to join in!

Discussing LOME's future is always a very somber topic, but I feel I need to address that 5.05 will be the last mega patch for LOME. Once The New Shadow is soundly released, I am hoping to move on and create an original intellectual property. Currently, I am aiming at creating my own RTS video game that is centered an my own fantasy universe. This will be no easy task, but I believe my last few years of creating LOME has prepared me for the chance to create my own works. It is possible I will open something crowd funded to help me secure some level of stable financing for the game, which is not easy for me do. I've always had a hard time appreciating things about life once money gets involved. You know the saying, "Mo' money, mo' problems", but 'tis life. Let me know your thoughts about me potentially opening a crowd funding project for the future.

Once I have begun development on my original game, I will have almost no time for LOME, but I would like the mod to still live on in the community. the discord will still remain active, and if you are interested in shepherding the community and modding the game after my time with it has ended, I highly encourage you. Stoking a community, feeding its flame is a very difficult task, and so I don't blame anyone for not taking up the torch. Know that you guys playing the mod, even if you didn't like it, really means something to me, and the mod has been there for me in my life, even when nothing else has. It has been an anchor for me for a big part of my adult life, and I couldn't be more thankful about it.

This is all very, very exciting - thank you and your team for the work you've done on this so far. Hope everything turns out alright, and really looking forward to spending a lot of time playing this!