We use the game's code to show a textbook example of the use of inheritance in the game and its pitfalls.

Posted by SebastianGioseffi on Oct 9th, 2014

If you are programmer this will post will most likely be too basic but we last week, while working on some the heroes, we ran into an almost a textbook example of the use of inheritance and we thought of sharing it. Perhaps you are just taking your fist steps at coding, or it is something you just dabble a bit in. In that case this may be useful, and also it is a chance to show you a bit of the game's code and structure.It all started with Orpheus. Quite a while ago we decided to add Orpheus as one of the heroes in the game, and that giving a boost the units nearby (the units that were close enough to hear him sing) would be a suitable ability for him. And so we did. Roque drew him, animated him, we added some code and voilà. Orpheus was in the mob, all was right with the world. However, some time later we thought about adding more musicians to the mob, and giving them the same ability as Orpheus. It seemed like a good idea, half the work was already done and it made sense that musicians would have similar abilities, so we created Elviros. You can see below a bit of the code for them. 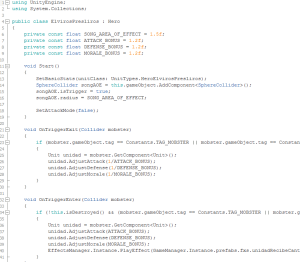 A chunk of Elviros's code ... which you can see was oddly similar to Orpheus' code 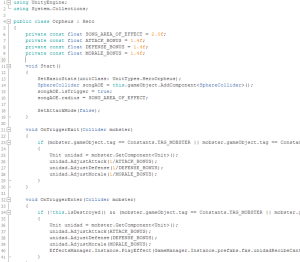 A chunk of Orpheus' code

Unsurprisingly, since they both do pretty much the same, the only difference in the code were a couple of values (Orpheus is better at what he does, sorry Elviros). Not only this, our plan was to add a few other musicians as well, so we were probably going to have to copy that code a few more times too. Here is when inheritance comes to the rescue. We created a new class called HeroMusician, which contained all the code for the special abilities, and made Elviros and Orpheus inherit from that class. 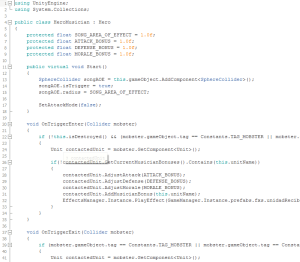 One script to rule them all (or at least those two)

Now if we have to make any changes the musicians abilities we only have to change the code in the HeroMusician class instead of doing it throughout several classes. And Orpheus and Elviros' code is now much smaller, pretty much nothing but setting their stats and modifiers. The magic of inheritance. 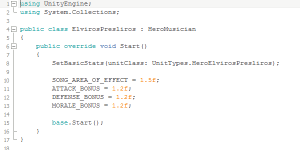 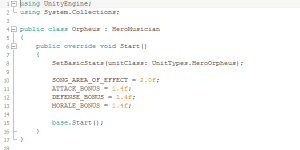 The real trick while dealing with inheritance, however, is not learning how to use it, but learning how not to overuse it. Your code can soon become flooded with tons of classes that do almost nothing but look neat in a hierarchy tree. It is very tempting to start adding classes because it makes sense object-wise, to scrape a couple of lines of code from some method, or because you may need them in the future, but you should think carefully before doing so. Having a thousands little classes can make your code as unreadable as having classes with thousands of lines of code.This is why our policy has from day one adding classes only when needed, like in the example above. And based on that philosophy that we ended up with our current class hierarchy hierarchy: 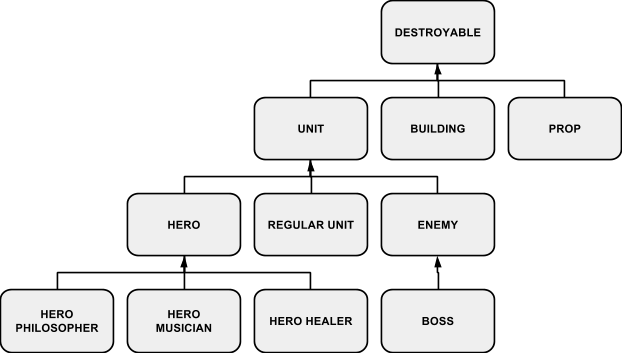 You can see the new class HeroMusician in the lower level, which means that Orpheus and Elviros not only inherit from Hero Musician but also from Hero, Unit and Destroyable. Is this the best way to do it? I can't tell for sure. The hierarchy may change in the future, but we will try to keep on working with the same strategy, without abusing the wondrous inheritance.