We won a "Rising Star" award at the Unite 2010 conference and would like to help other Unity developers on their mission to create amazing games. This is why we release our "Entity Framework" to the public today. Implement game logic in your level with 0 lines of code!


OK, OK I admit I just made that headline up BUT fact of the matter is: we did win a “Rising Star” at the Unite Awards 2010 ceremony in Montréal last night and we’re super happy about it! :) I don’t know if we’ve received a shiny trophy that we can put on a shelf in our imaginary office. I did hear though that we won a workstation coming with all Unity licenses and that’s where the money’s at swashbucklers – so thanks Unity! We’ll know for sure as soon as Michael wakes up from his binge at the after-party.

Speaking of whom, Michael is supposed to give a talk at the conference today, let’s hope he wakes up in time! In any case, we’ve prepared something for you. It’s the “Entity Framework” that we used to develop the prototype. It makes a lot of things easier for designers to work on the game logic part in levels. Let me explain: in case you are familiar with logic editors like Unreal Engine’s Kismet or Cryengine’s Flowgraph – it is not as sophisticated as these tools! :) But the basic idea is the same: providing an abstract interface to the Unity game API, that doesn’t require any scripting, is less prone to syntax errors and doesn’t scare designers. If you look at the right of the screenshot below, you can get an idea of what I’m talking about: 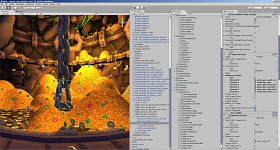 Important classes are for example:

We’re definitely going to use this system if we get to develop a full game with Unity and would expand on it (e.g. a visual overview). I will upload the presentation Michael uses for his talk as soon as I receive it and maybe we can put a tutorial together, just to show you a few examples of how quickly and easily you can get game logic running with our Entity Framework and 0 lines of code! :) We hope this helps fellow indie developers using Unity to create kick-ass games! Download below and post any questions in the comments!

UPDATE: The archive was updated for a file cleanup and the slides to the Unite'10 presentation "No Code All Gameplay" were uploaded. You should be able to view the presentation as soon as the file is authorized!

I didn't realize Pirates of New Horizons was using the Unity Engine. This engine has caught my eye and now I'm even more inspired