The Version 4.5 Full Release offers much new content and improvements, focusing mainly on new battle models for dozens of characters, numerous character and map updates, and combining all previous versions into a single, all-in-one installer.

It has been several months since the last update, but that is because I have been extremely busy with making some much needed improvements to the mod (and had a new baby!). Essentially version 4.5 is a compilation of all previous versions of the mod but, more than that, it makes a ton of changes and improvements to an already extensive total conversion mod.

For starters, there have been quite a few changes to the campaign map. Terrain alterations were made in several regions, such as clearing of much forested areas from Gong'an and Lujiang, adding a series of lakes to the former Jiangxia commandery and, most noticeable, the inclusion of a new settlement in the heart of China. Previously, there was no route between Luoyang and Wancheng - one had to either go east, then back west through Sishui pass or go west, then back east through Chang'an and Tong Pass. Historically speaking, this shouldn't be the case - although there are mountains between Luoyang and Wangcheng, there was direct access between those two cities through those mountains. This area, part of southern Henan commandery, had several cities. One city, Yangcheng, was added and now provides a direct link between two of the more important settlements in Three Kingdoms China. Below you can see a screenshot of the newly reformed region. 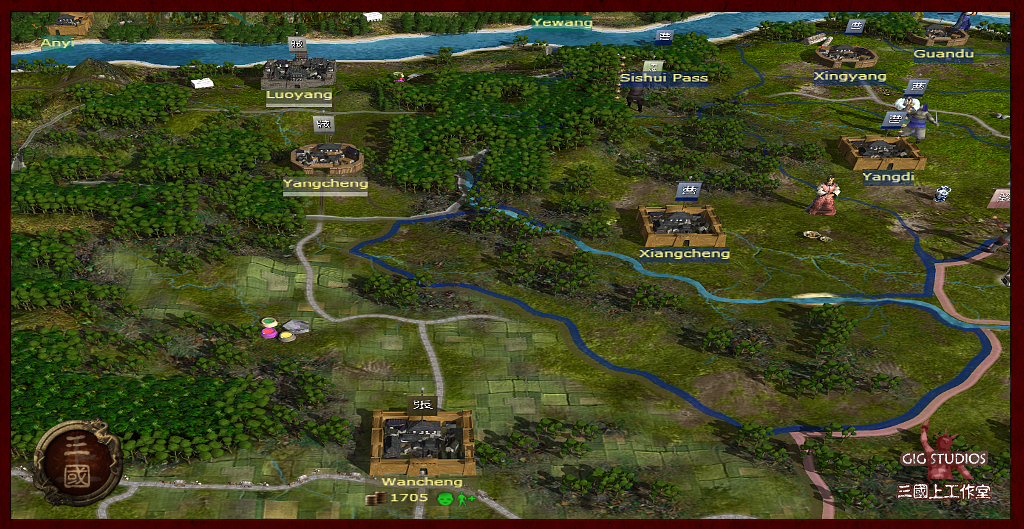 But the focus of the versions 4.5 update is the characters and, to start off, many characters had their biographies rewritten, stats and traits tweaked, and 6 new characters were added. The first five of these - Zhuge Xuan, Wang Zhong, Wu Zhi, Guo Gong & Zhu Hao - were incorporated into the Unaligned Faction, providing some more useful characters to bribe and add to your growing empire. The sixth character, the famed Xu Shao, was added to the roster of the warlord Liu Yao - leader of the Yangzhou faction. Xu Shao is someone that most Three Kingdoms fans know of, through his interactions with Cao Cao, however historically he died within about a year of when the mod starts. Despite that, this interesting character was missing at a time when he most definitely was active and participating in the ever-growing conflicts around the country, specifically where he was located at in the Jiangdong region. 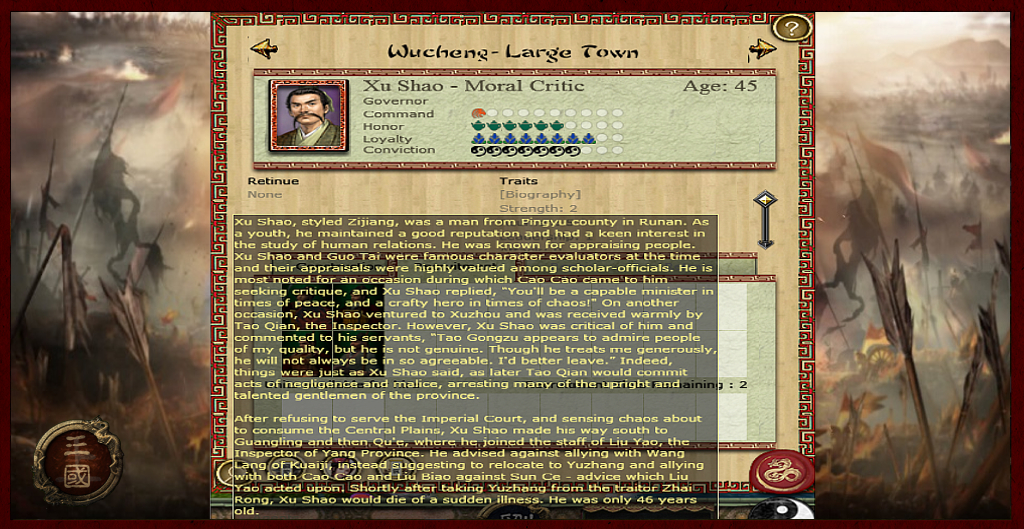 Another addition to characters was the creation of a few unique traits for a select group of particularly notorious people. These characters - Lü Bu, Gongsun Zan, Yuan Shu & Li Jue - were all particularly dishonorable, in their own right, yet nerfing their Honor rating could not normally be done without tanking some of their other traits. So, to accomplish this and add greater immersion and flavor, new traits were made for each of these characters. Below you can see the traits (and high Dishonor rating) for both Lü Bu and Li Jue. 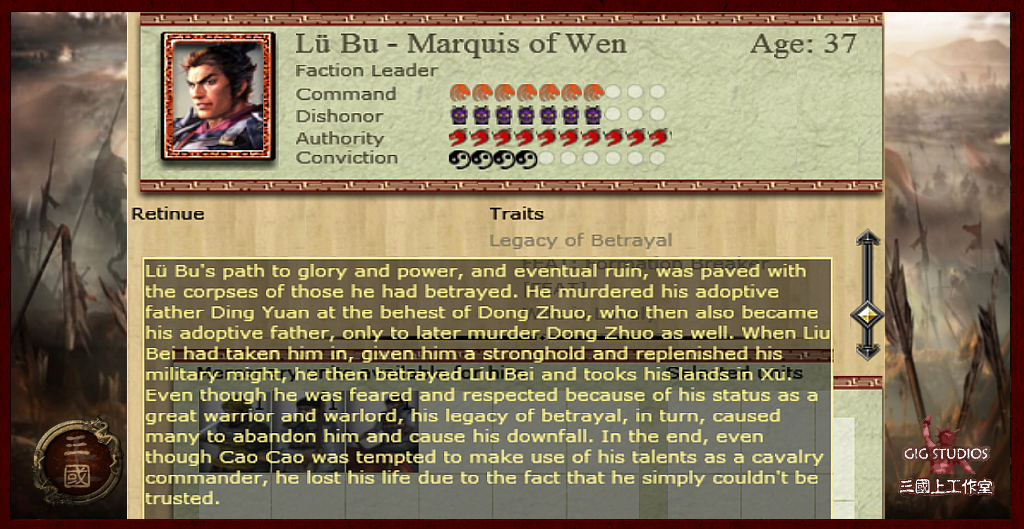 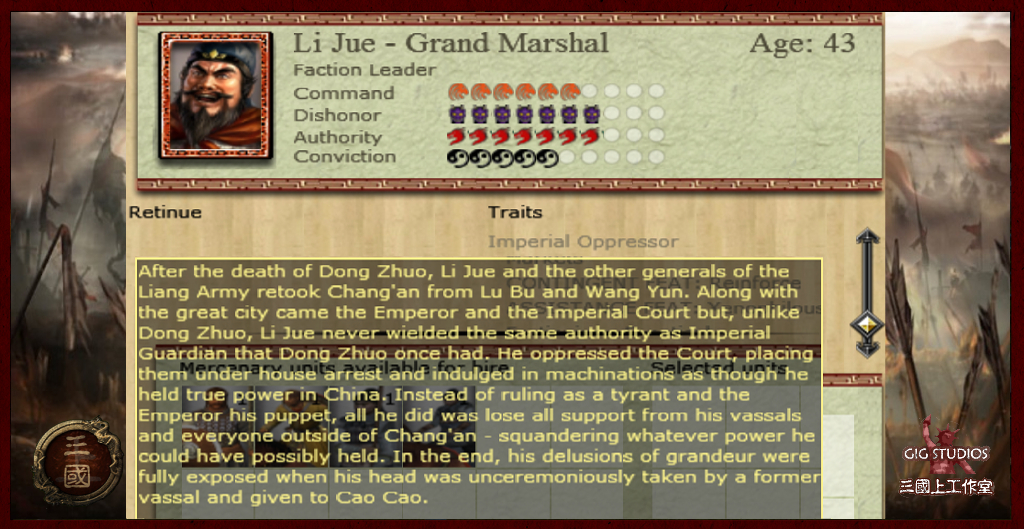 The biggest part of this update was the visual improvement of characters, both on the campaign map and in battles. For the former there was a lot of work done to make improvements to texture and model quality, as well as better distribution of assets already available. One specific change was the overhauling of rebel commanders based upon on the culture of local rebel garrison. For example, if the local rebel garrison and commander were of the Nanman culture, then the commander would have a Nanman model on both the campaign and battle maps. And such is the case for rebel Han, Korean, Shanyue, and Northern Nomad cultures. Another change had to do with Sun Ce, as his battle model was completely overhauled and thus he needed a matching model for the campaign map. Below you can view Sun Ce's new model, flanked on the left by Zhou Yu and the right by Taishi Ci. 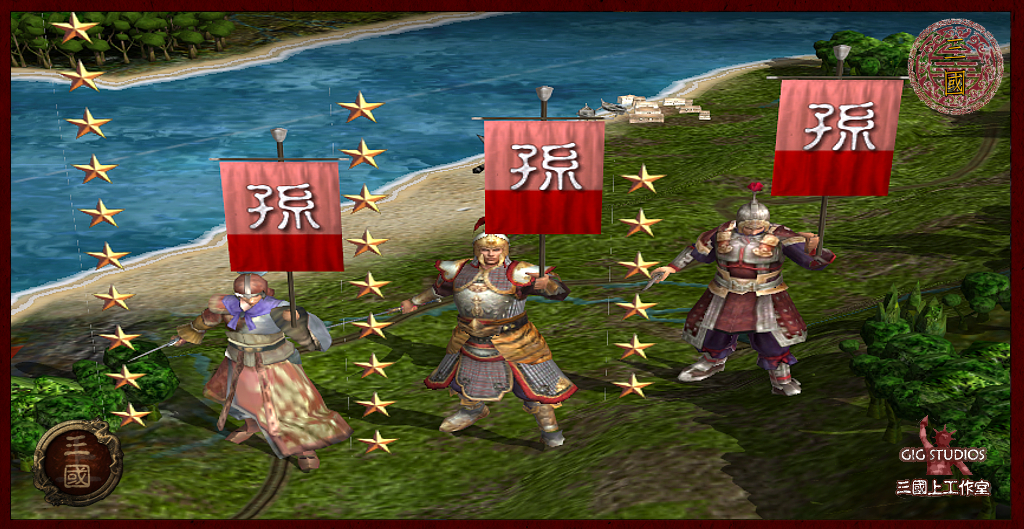 However, the most time and effort was put into the battle models of the era's heroes. Not only the most famous heroes, but also those who were either important to their respective faction or integral to the struggles of the Three Kingdoms yet overlooked by most. While in the previous version 4.4 (Diversity) Update I focused on improving the common soldier, one thing this mod had sorely needed was improving the characters themselves. After all, the Three Kingdoms is beloved because of its characters and this mod has put a focus on them since Day 1. It was only fitting that the last update of this mod offered special treatment to these heroes. All told, in the version 4.5 update unique battle models were made for Wei Yan, Gan Ning, Dian Wei, Sima Yi, Cao Ren, Taishi Ci, Liu Bei, Huangfu Song, Yu Jin, Zang Ba, Wu Yi, Ji Ling, Ling Cao, Liu Pan, Jiang Wei, Xu Chu, Mu Shun, Lu Su, Xiahou Yuan, Lu Xun, Sun Ben, Chen Dao, Zhang Ren, Yue Jin, Zhang Wei, Wen Ping, Lü Dai, Fan Chou, Gao Shun, Liu Feng, Cao Hong, Luo Jun, Li Le, Yan Xing, Ma Dai, Guo Huai, Han Dang, Cai Mao, Gongsun Mo, Guo Si, Wu Anguo and Li Yan, while several other existing characters (Lu Bu, Cao Cao, Zhu Jun, and Zhang He) had their textures and models improved. Below you can see a small assortment of the new battle models featuring (from left to right) Liu Bei, Sun Ce, Xu Chu, Sima Yi, Wei Yan and Gan Ning. 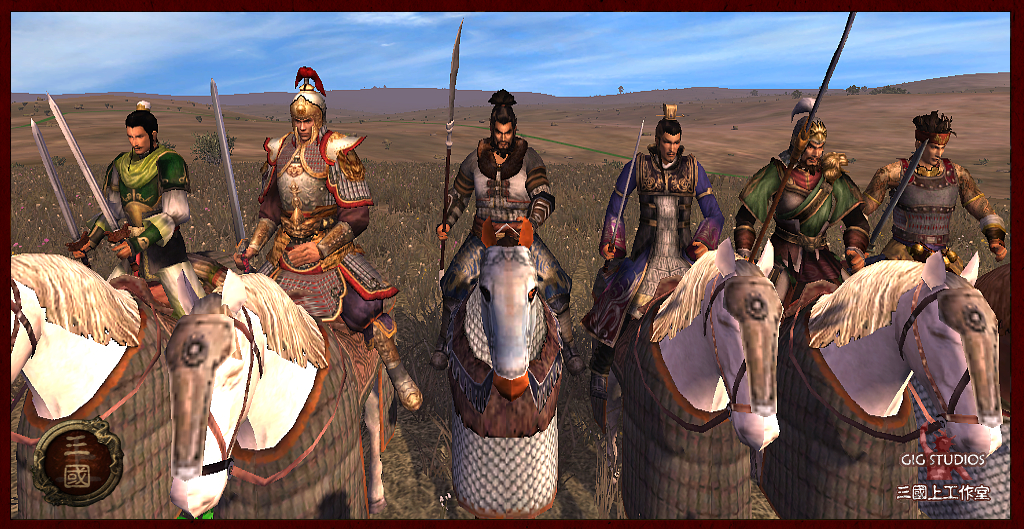 The Version 4.5 (Heroes) Full Release can be downloaded here and has instructions on how to properly install. After installation is complete, then download the RoTK v4.5.002 Patch and install it manually per the directions on the file's page.

For the full v4.5 changelog, see below:

How hard would it be to create a mod that allows you to recruit the special units of defeated factions if you occupy their capital city (or linked to the special city description)? Also is there anyway to shift the cap of special units based on the top tier city and the final tier of admin building? I've loved using my special unit but want a way for them to show up in the mid and late game.

It’s not so much an issue of the difficulty in doing those things, it is if the old Med 2 engine can support it along with the rest of the mod. A while ago I actually attempted both of the things you talked about and, while I could technically get it to work, the mod became entirely unstable - it would crash at the end of the first turn. The issue lies with the EDB file (controls unit recruitment with buildings & conditions) as it would become overloaded and cause the mod to crash - you couldn’t play past the first turn. Right now, with everything the mod already has, the EDB is pretty much at its limit. The only way I (or a mod) could get the proposed unique unit recruitment to work, and keep the mod functioning, is if a bunch of necessaries in that file were removed.

why do I want to download this file RoTK_v4.5.002_Patch.zip there is no file I beg to re-upload the file because I really want to play this game I wait as soon as possible hopefully this will be responded quickly