Version 4.2 offers much new content and improvements, focusing mainly on the improvement and expansion of the Goguryeo roster.

It is time for another update release for Rise of Three Kingdoms, this time to version 4.2. This update adds quite a bit of minor, but important, quality of life improvements to the mod, starting with the much needed expansion of the Goguryeo unit roster. Since their inclusion to the mod, Goguryeo had pretty much been limited to only light and heavy native units, their elite Ironclad Warriors, allied Samhan Cavalry, and regional recruitment of local Han and Xianbei units. In addition to that, the native light and heavy units only had one model, despite armor upgrades, and so a change to that norm was sorely needed to bring their quality in line with the rest of the mod's rosters. What you will see below is the visual difference in armor for light Goguryeo units, starting on the left with the basic unit. The second is of the first armor upgrade, with soldiers now wearing two different types of leather armor - one lamellar and the other plates. On the far right we have the second armor upgrade, with units now wearing much heavier steel lamellar helmets and a steel scale cuirass and skirt. 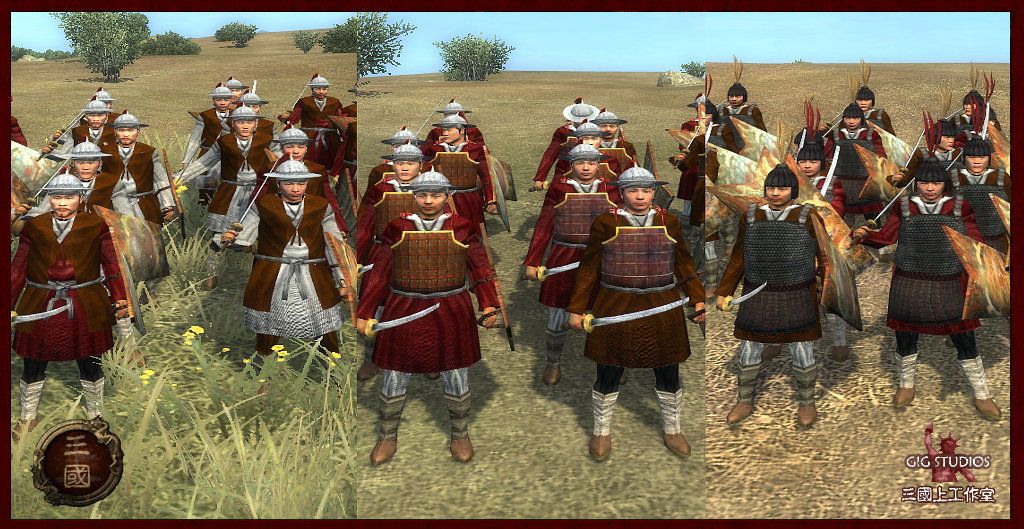 Speaking of the Ironclad Warriors, their model and textures were improved in several different regards. First, where as they only had one face previously, the unit now boasts 5 different faces. Also they were given a second uniform color (brown) to go along with the existing red. And finally, their lamellar armor was visually improved by cleaning up the lamellar itself and adding red stitching to the plates, while also making small changes to vertex assignments with the model. 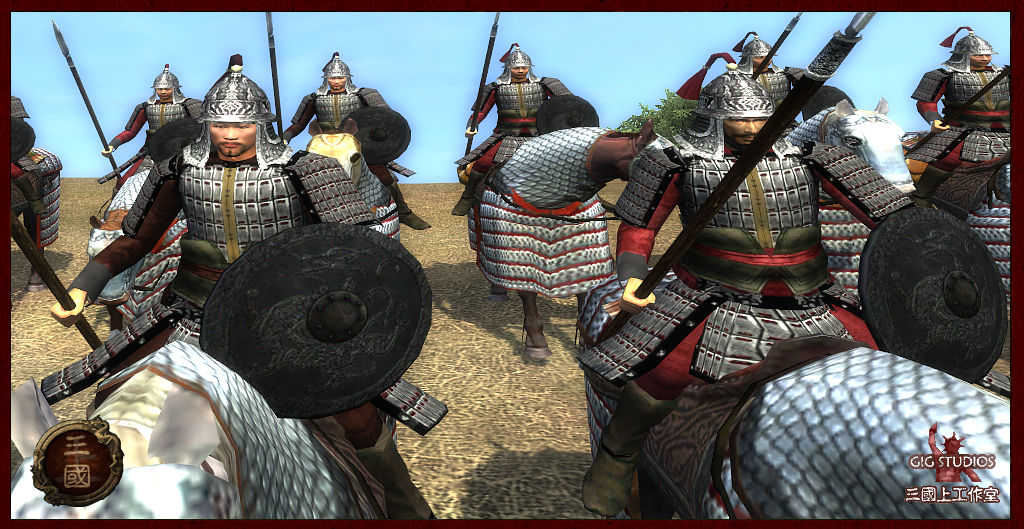 The biggest change to the Goguryeo roster, however, was the addition of a Tier 3 Armored set of units. Inspiration for these units were taken from historical sources of 3rd century Goguryeo soldiers and I feel they turned out much better than I had anticipated. This new tier of units come in four varieties - swordsmen, spearmen, foot archers and mounted archers - and are exceptionally armored from head to toe. A steel lamellar helmet, iron collar, layered lamellar scale shoulders, iron bracers, lamellar scale cuirass and skirt, and finally lamellar scales covering the front of the legs make these units some of the most heavily armored in the entire mod. 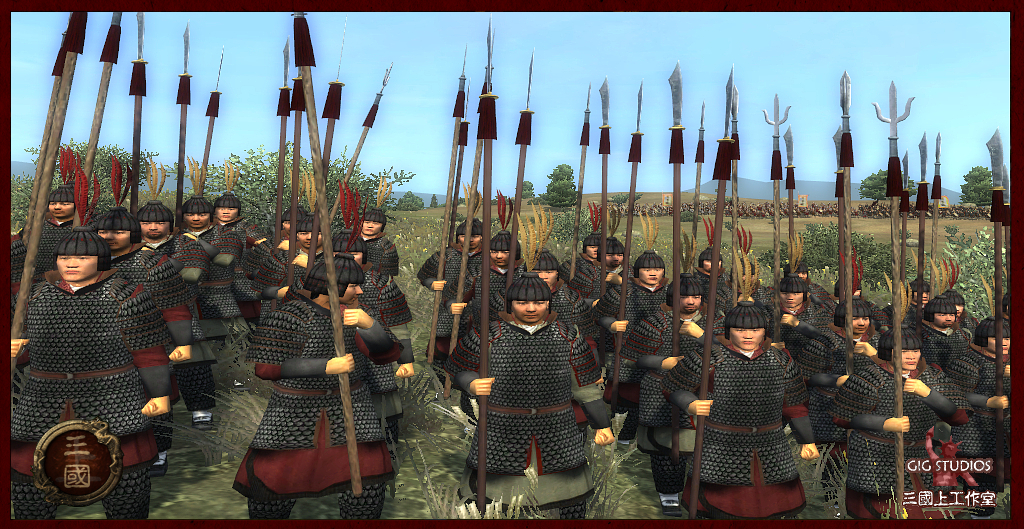 Something else that was updated, but isn't exclusive to the Goguryeo faction, was the improvement of the banners carried into battle by individual units. Up until this point the banners were from the original beta version of the mod and had never been touched upon in all of the years of this mods development. They take inspiration from the banners of Total War: Three Kingdoms, but each faction (specifically the Han factions and Goguryeo) has banners unique to their faction. Below you can see the banner for the Yuan Clan (Yuan Shao), followed by the Sun Clan (Sun Ce). 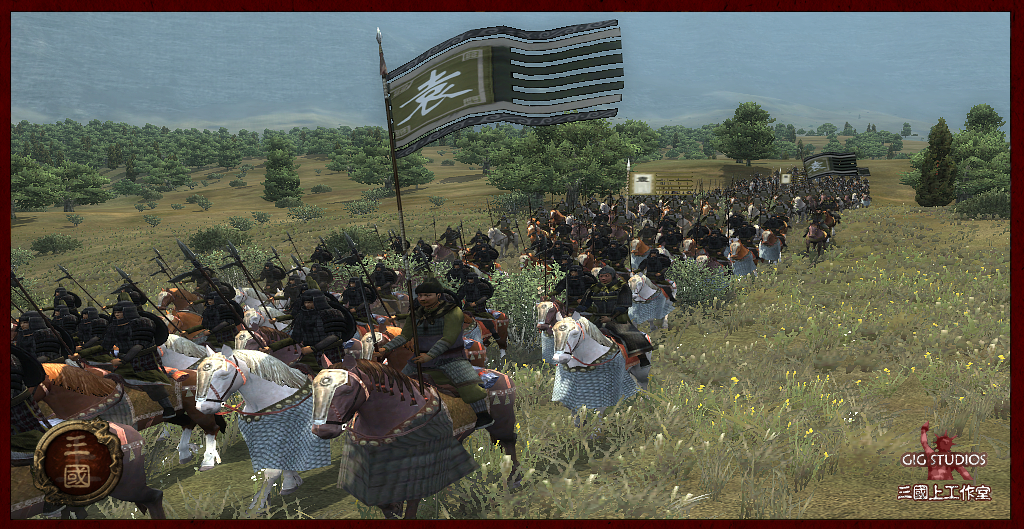 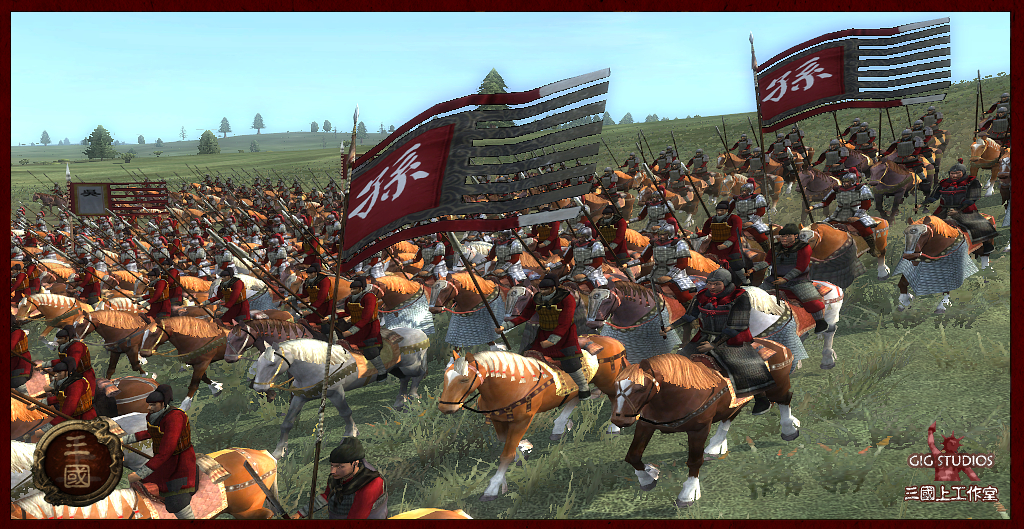 In addition to the improvement of the Goguryeo roster and new battle banners, we have included the use of Chinese voices when selecting units or groups and issuing commands on the battlefield. The longer pieces of speech content, such as general's pre-battle speech or advising when ladders are at the walls, have not been updated yet as those will require some very specific and elusive audio files to overhaul. Also the content from v4.0 Patch #4, which created an event for Gan Ning to join Sun Ce and fixed a recruitment issue in the settlement of Dandong (among other things), was reimplemented, as those changes somehow did not make it into the v4.1 Update that followed. Finally, Gigantus included the use of the Affinity Switch to the .bat command - it prioritizes the use of the first core for the game and should help a bit in the stability and FPS department.

The version 4.2 (Korea) Update can be downloaded here and has instructions on how to properly install the patch - note: the patch is NOT save-game compatible.