Post news RSS Rise of the Reds Update: The Stories of Others, Part III

Ever since the armistice of 1953, the social, economic and political divide between the two Koreas had become more and more extreme. While the South evolved into a well respected, modern society with a powerful economy, the North isolated itself under the leadership of the self-worshipping, totalitarian Kim regime and became an international pariah with dangerous nuclear ambitions. As the time went by, the two opposing systems remained locked in a smouldering conflict which would endanger the...

Ever since the armistice of 1953, the social, economic and political divide between the two Koreas had become more and more extreme. While the South evolved into a well respected, modern society with a powerful economy, the North isolated itself under the leadership of the self-worshipping, totalitarian Kim regime and became an international pariah with dangerous nuclear ambitions. As the time went by, the two opposing systems remained locked in a smouldering conflict which would endanger the stability of the Asia-Pacific region for many decades. In the summer of 2016, after one blatant Northern provocation too many, the South returned fire, prompting the Northern leader to send his army of over a million men on an ill-fated military adventure. What followed was a three month long engagement that was quickly popularised as the Second Korean War by the international media. It was during this brief but vicious escalation when a US Marine Corps logistics officer by the name of Alexis Alexander distinguished herself with the defence of a key outpost in the de-militarised zone between the two countries.

Badly nourished, underequipped and only motivated by its blind devotion to the Northern leader, the Korean People's Army failed to make any major gains against the joint forces of South Korea and the United States. With a total deadlock at the frontline and no hope of victory in sight, a quiet palace revolt in Pyongyang resulted in the permanent removal of the delusional Kim regime at the hands of its own generals, who installed an alleged 'heir' as a figurehead to consolidate their own power and sued for peace. South Korea accepted what few conditions there were, as it was unwilling to absorb the severely underdeveloped North into its economy and the United States did not wish commit themselves to a prolonged military campaign in Asia just a few years after the retreat from Iraq and Afghanistan. As a result, the Korean Peninsula remained divided. 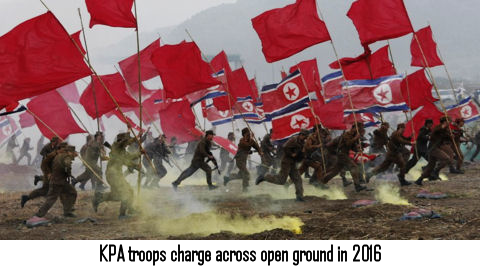 Under the rule of the military cadre, North Korea enacted a number of economic reforms. For a time, it seemed as if a careful rapprochement between the two Koreas would become a possibility until 2028, when the US government caved in to the popular outcry for a total withdrawal of all American troops from overseas after a series of unacceptable losses against the GLA. The Americans abandoned their Asian allies in such a haphazard fashion that the Northern generals saw the opportunity to triumph where their former leader had failed: In July 2029, the KPA went on a rapid offensive across the border, its frontline forces equipped with surplus weaponry from China as well as its own arsenal of crude but fearsome weapons of mass destruction. The Southern forces put up a valiant stand, but were pushed down to the 35th parallel before the battle degenerated into a static tug-of-war between two armies that grinded each other to dust. Meanwhile, the People's Republic used its veto power to compromise the United Nations whose utter lack of decisiveness became more glaring than ever now that America was solely minding its own business and the future of Europe depended on Chinese credits. To make matters worse, it was later revealed that the Northern war effort hinged on the strategic planning and logistical support of the People's Liberation Army.

During this hour of desperation, the South Koreans found help from an unexpected ally: The island nation of Japan. Together, the two former enemies, now united against a common adversary, reclaimed the initiative and prompted the Chinese to withdraw their support. In 2033, the coalition forces liberated the Northern capital city of Pyongyang but their victory was a pyrrhic one: The entire country had suffered heavy damage to its infrastructure, leaving only China as the single true victor of this war, as it had managed to both eliminate a long-term political liability in the North and cripple a confident economic competitor in the South through its ruthless manipulation. Regardless, the people of Korea now found themselves in a shared misery and went on to rebuild their newly reunited nation, which now became the United Republic of Korea, together.

Having learned a number of lessons from the extreme militarism and rabid ultranationalism of the Showa period, the people of Japan have lived under a constitution that placed strict limitations on the country's military sovereignty ever since the end of the Second World War. But the early decades of the 21st century put many of these pacifist policies to a test: With the People's Republic of China claiming ownership of disputed islands, the nuclear ambitions of the North Korean Kim regime and a stagnant economy of its own, calls for a more assertive Japanese foreign policy became louder. The brief escalation of the Korean conflict in 2016 turned out to be a rude awakening, as it revealed that the United States would not be willing to eliminate the Northern threat once and for all, thus raising Japanese concerns over America's dependability.

A mere two years later, the partial collapse of the Chinese real estate bubble resulted in economic turbulences across the global markets, prompting radical elements of the PRC's leadership to enter an aggressive course in the long-brewing territorial dispute with Taiwan as a show of force. On the 1st of March, 2018, over 30.000 soldiers of the People's Liberation Army Marine Corps led by General 'Anvil' Shin Fai seized control of the island's most vital coastal installations and by the time the American President stepped in front of the media to condemn the attack, most of the Taiwanese military was already caught up in a desperate battle against the PLA, which put a decisive end to the fighting before the arrival of an American naval task force. In the wake of the crisis, Taiwan was annexed into the People's Republic and the Party hardliners who had masterminded this reckless operation were arrested on behalf of the new Chairman Zhao Wei, who would later become famous for the many reforms of his lauded Modern Way programme. 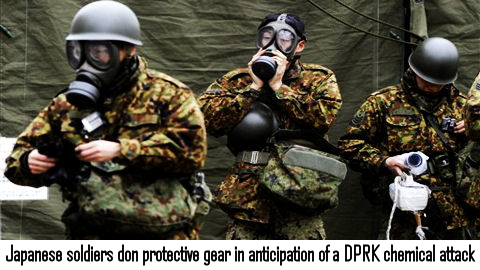 In the eyes of the Japanese, this dramatic turn of events came as a shock since it revealed the apparent inability of their American allies to deliver a swift response to China's dangerous gamble, an impression which only became worse during the Global War on Terror in which the Chinese military drove the GLA out of Central Asia almost entirely by itself. Shortly afterwards, the abrupt withdrawal of the US overseas forces in 2028 was met by sheer panic: With the United States out of the Asian theatre, Japan now found itself completely isolated in the light of resurgent North Korean aggressions and the uncontested dominance of the PRC. What followed was a loud and dirty political battle over a series of controversial reforms which transformed the Japanese Self-Defence Forces into a massively armed military twice its former size. During this time of paranoia, even the most unthinkable option became a very real possibility: With the necessary material and knowledge at its disposal and the constitutional ban on nuclear weapons suspended, the country enacted a policy of deliberate nuclear ambiguity to deter its adversaries.

When South Korea found itself invaded by the newly invigourated North, the Japanese government decided to step in and deployed its new military against the Korean People's Army, whose raw fanaticism and atrocious treatment of civilians and prisoners reminded the Japanese of their own history in a very dark twist of fate. As a result of this haunting experience, Japan went into great lengths to normalise the relationship with the newly united Koreans after the war. In 2036, then Prime Minister Kazuya Shimada attended the opening ceremony of a grand memorial dedicated to all Koreans who had lost their lives in the wars and those who had suffered under the brutal rule of the Japanese Empire in the early half of the 20th century. Under the eyes of the entire world, the Prime Minister silently approached the new monument, laid down a wreath and fell on his knees. The 'genuflection of Seoul' made international headlines and was lauded as a striking gesture of humility, atonement and reconciliation after centuries of grievances among the two countries and became the symbol of a new era of relationships between the people of Japan and Korea. 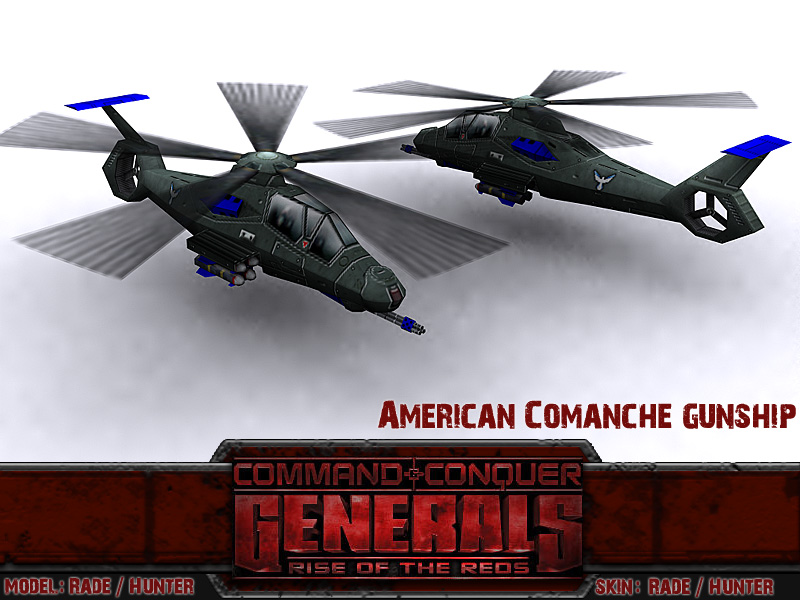 Despite its cursed development history which was marred by overflowing costs and even a temporary cancellation in the early 2000s, the US Army's infamous Comanche project has eventually produced one of the most agile and heavily armed helicopter gunships in the world. 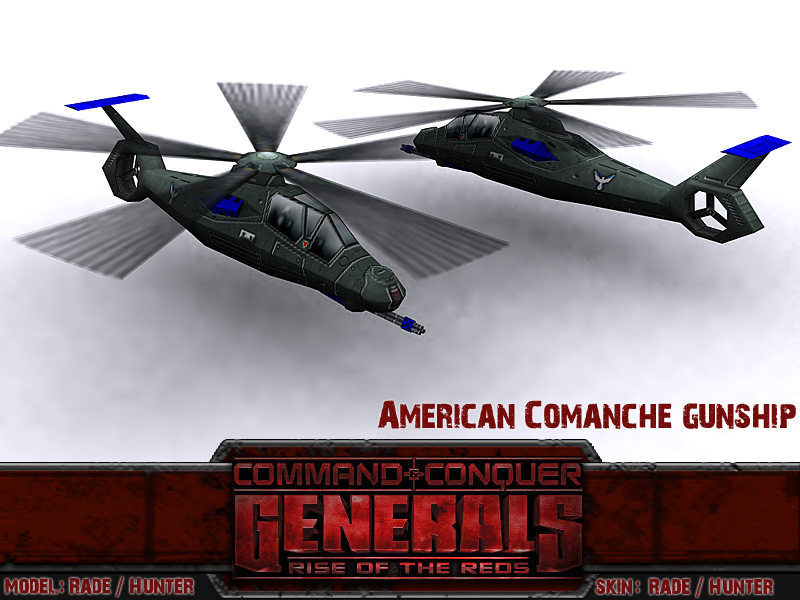 I thought chemical attacks were outlawed by the Geneva convention? Anyway, nice update and I really like how North Korea got ***-kicked... twice!

And when things are tight, neither does ECA.

In RL, North Korea is one of the few countries that haven't actually signed the Chemical Weapons Convention and it is estimated that the country does have all the necessary equipment to produce anything from mustard gas to VX.

Waiting for the next.

Most likely, but it's not like they can do anything about it though...

Anyone else have this sinking feeling it's the PRC that becomes the villian by the end of the main story and gets destoryed by everyone else like what happened in Tom Clancy's novel "The Bear and the Dragon"?

Flags are cheaper than guns... and it's not like the DPRK military care for the lives of their fodder.

I was hoping for a uber powerful DPRK... guess that's not gonna happen in this timeline...

I want to read something about Hungary/Central-Eastern Europe! :)
Anyhow, excellent work guys.

The Russians got there now, probably...

I was sure I saw a map where the only neutral countries on the map seemed to be Switzerland, Slovenia and Croatia. Might be forgetting some but I'm seriously interested in what happened to those two during the war. Seem like a bit in the way to anyone who'd want to walk into Italy.

Zhao Wei is already popular in China. Imdb.com Maybe she got into politics?

Coincidentally identical name is a coincidence, I promise^^
For one, ROTR's Zhao is referred to as a Chairman.

Can't Believe that the Kim Whoever invaded South Korea with FLAGS then Korea is unified since its independence And Taiwan is no more by the Chinese..

Man the ROTR Storyline is getting interesting

And then there was peace in the Asia-Pacific.

Not for long, considering the general grimdarkness of the setting...

I want to hear what ROTR lore about Australia is.
In RL us Aussies are stick between a Chinese driven economy, and a heavy diplomatic alliance with the US, so I'm curious to how ROTR plays on this.