Media Update #40, the first of many updates left in the Rise of the Reds Project and the first update of the new year. Check out the new content for the ECA, Russian and American factions. 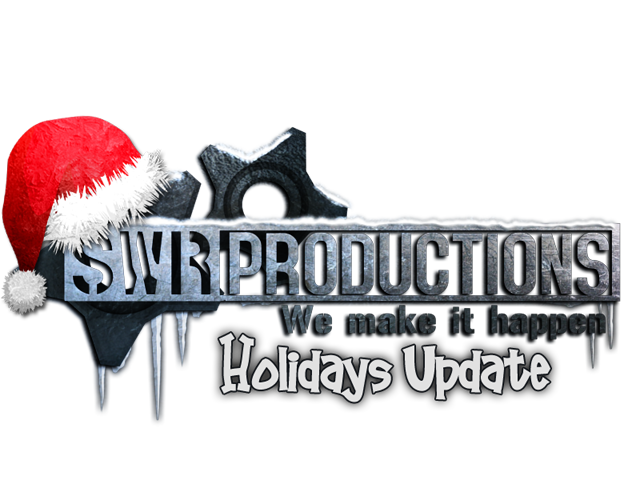 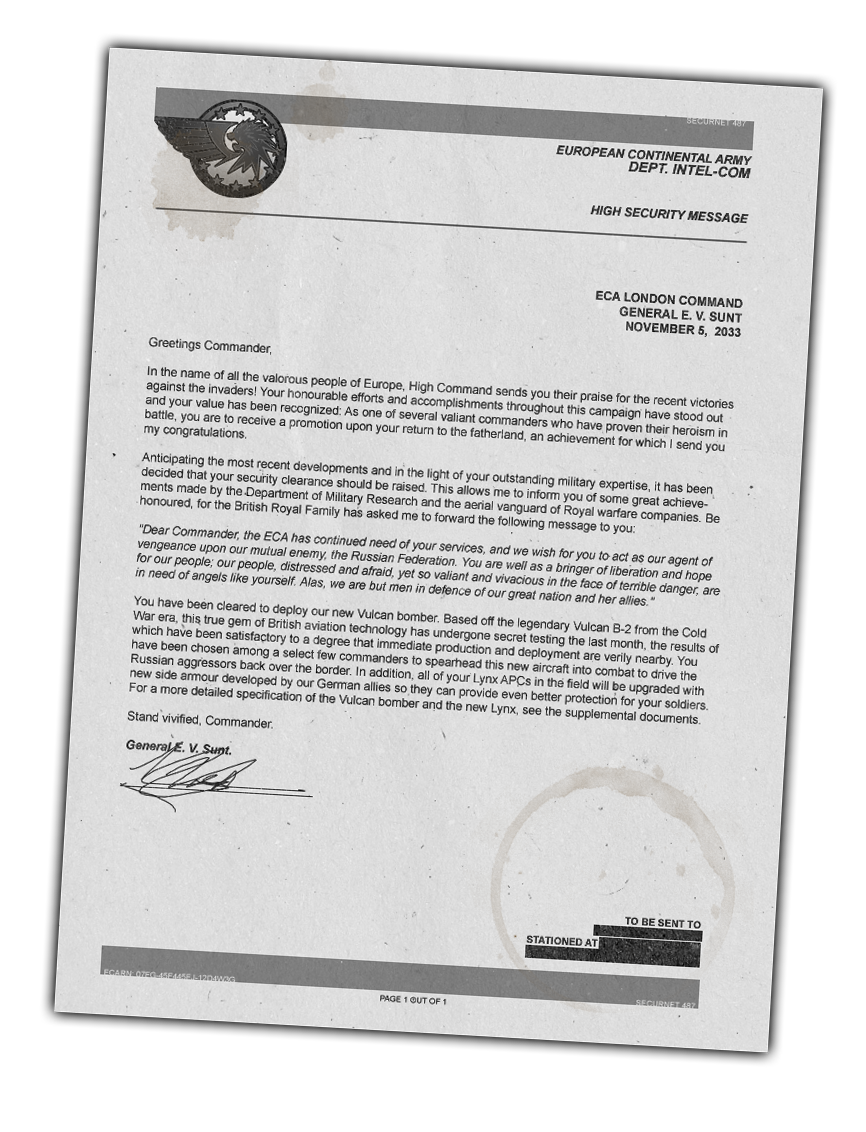 RISE OF THE REDS UPDATE #40
Long time no see!

Welcome to our first 2010 update, we hope everyone has had a great holiday season and hope you have a great year! Now I know what you must all be thinking because it's common to hear this once you haven't updated in a mere 2 months. "Your dead!" "It's over!" "WEN?" well, I assure you we're out of our comfy little vacation and we're hauling ass like before. To confirm this we're here to show you a big update which contains some new units from the ECA, one of our major goals to finish in the following months. Plus we have a few surprises for you below so let's have a look shall we? 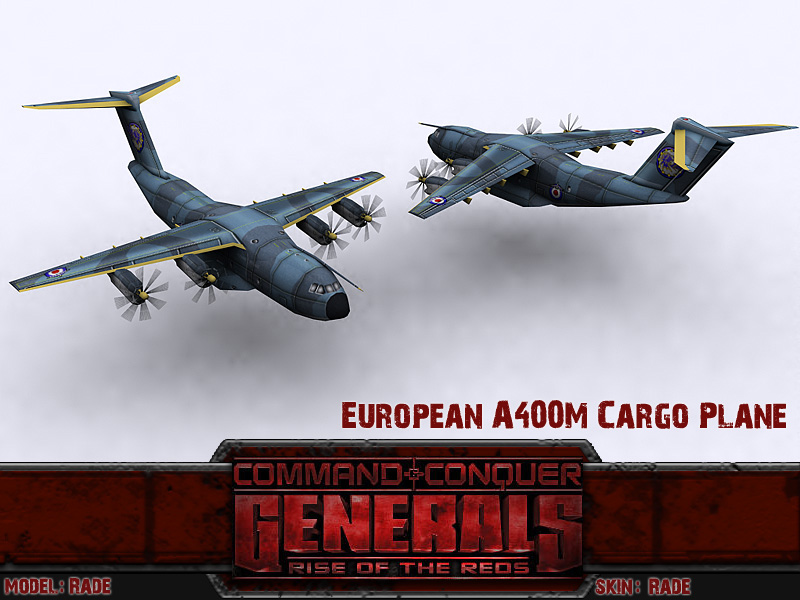 A rare sight in the European War it is unknown how many of these aircraft still remain or where they are deployed from. They are the primary targets of hotshot Russian Berkut aces that hound for these aircraft restlessly hoping to not only score a kill from one of the supposedly few remaining A400ms but also hoping to doing extended damage to European forces by destroying whatever it is transporting along with it. 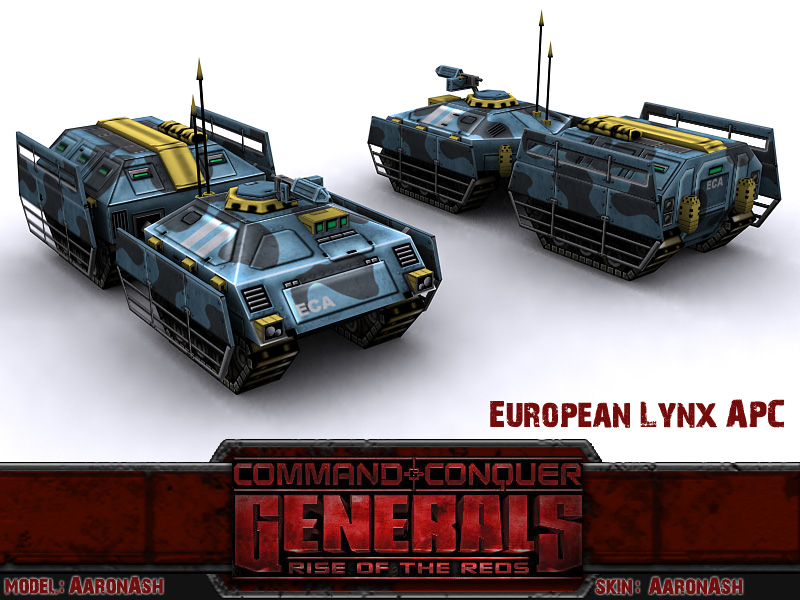 The European Lynx APC is the workhorse of ECA`s infantry division. Despite its outlandish design, it’s very reliable and offers the best possible protection for the troops inside something essential in Europe`s terrain where ECA supply lines and reinforcements are prone to be ambushed by Russian gunships. The Lynx brigades had suffered heavy losses in the battlefield against the heavy shelling and armour piercing weaponry deployed by the Russian Army. As a cheap modification, armour skirts were installed on the sides to allow for greater protection against incoming projectiles. Although the plating isn't the best the ECA has to offer, it is the cheapest and ensures the Lynx APC can continue to serve as an inexpensive infantry carrier of the ECA. 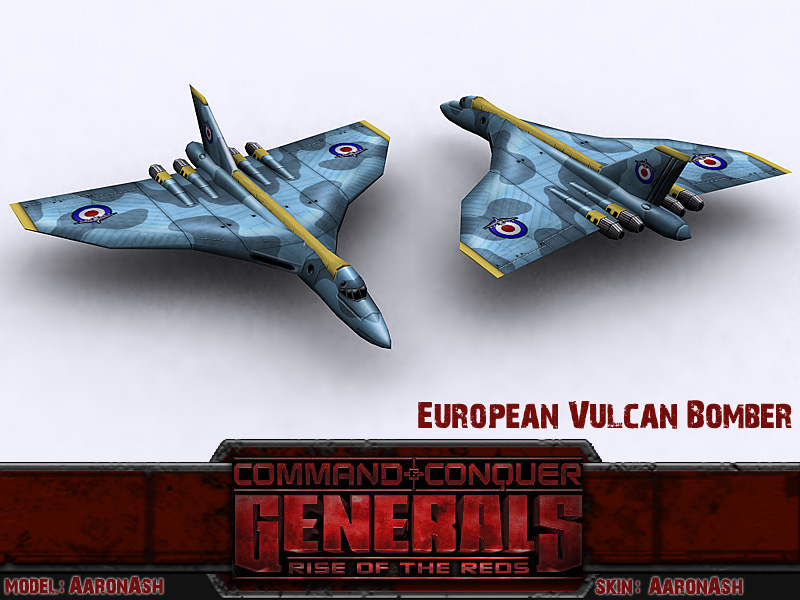 Following the amalgation of the European Military strike forces within the ECA, endeavours were made to make the army less dependent off the USA in all aspects of modern warfare. Primarily, the lackluster airforce division had some gaping holes within it's tactical and strategic arsenal. The Russian Tupolev and american B2 and B1B strategic bombers were unsurpassed and there was nothing from within the European mainland worth a comparison. Matching these titans proved to be a daunting yet not unrewarding task.

An evolution of an early British Cold War pearl was uncovered and found to be more than suitable. This Delta Wing aircraft was mounted with modern aviation and military technology. The aerodynamic design barely needed any modification to fit the standards of modern precision bombing. The pioneering AVRO Vulcan bomber appeared to be a timeless design suitable for modern tactical and strategic needs, and Russian commanders have felt their grasp on the European skies challenged by the speed, maneuvarebility and tactical success of this new enemy asset. When battling with ECA Generals, the Vulcan bomber will be the harbringer of your destructive General's powers. 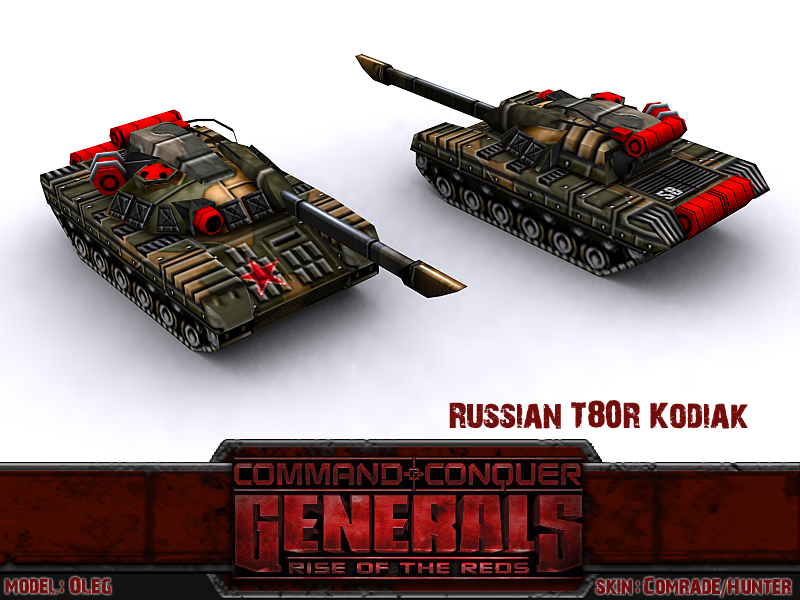 The Russian T80R Kodiak carries an experimental rail gun and it is the pride of General Aleksandr because it has made the Russian Federation the first nation to properly field rail guns in large scale warfare. Rail guns use magnetic rails to fire solid chunks of matter at hypersonic speed. Although rail guns are very powerful they have been known for suffering of a sharp loss of accuracy at extreme ranges. Aleksandr is currently experiment with different kinds of ammo but it is currently using an uranium charge that consists of two components: a shell of titanium and a core of uranium atoms suspended in plasma state. The T80R fires this powerful slug rapidly and efficiently being capable of piercing any armor. 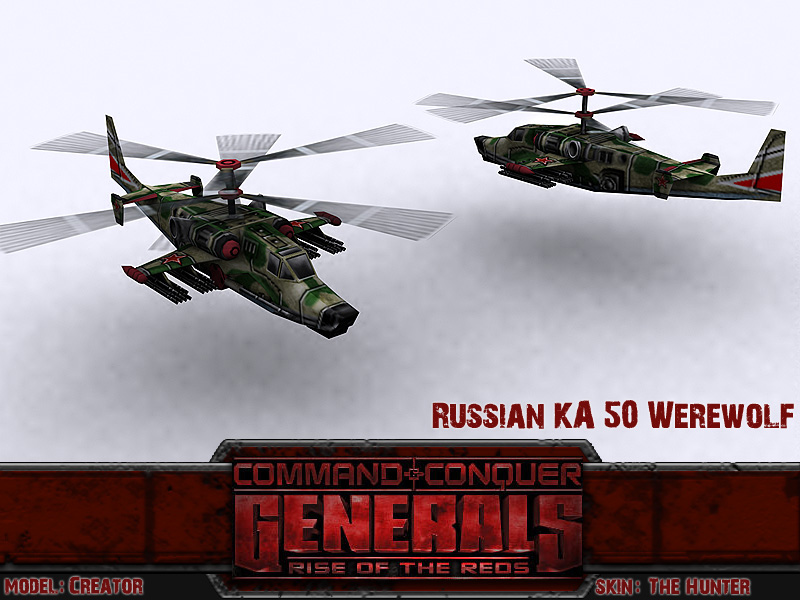 The Werewolf lives up to its name. It is a deadly, agile and a savage predator. It fires its missiles at the juiciest prey and then lays down a rain of high caliber lead across the field massacring enemy infantry and just as it gracefully advances, it backs away when satisfied, disappearing into the night. 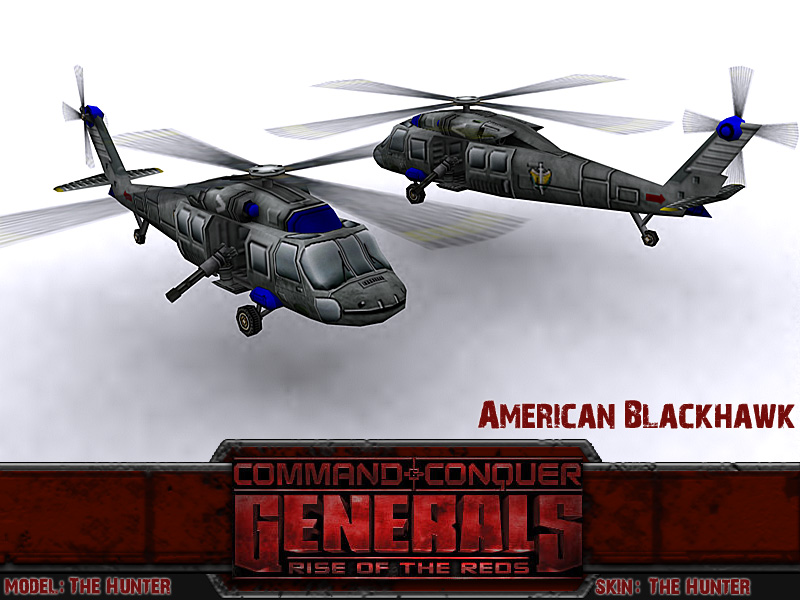 The American Blackhawk has operated in many scenarios all over the globe and has proven time and time again it is an excellent transport helicopter. Not only can it sweep the landing zone clean it can also lay down a barrage of covering fire for its passengers. The Blackhawk tactical transport helicopter is the army's unrequited quintessence of infantry insertion deep into enemy territory. During the war on the GLA, the multifunctional Chinook helicopters had been used to this same end. However this unarmed and expensive helicopter sustained heavy losses to enemy RPGs and Stingers. With the Osprey being impractical due to the fact that it, too, is unarmed, the Blackhawk was uncovered and reassigned to the army of General Thorn to guarantee enemy inquietude. It mounts an anti infantry minigun and arrives with eight rangers ready for aerial insertion. 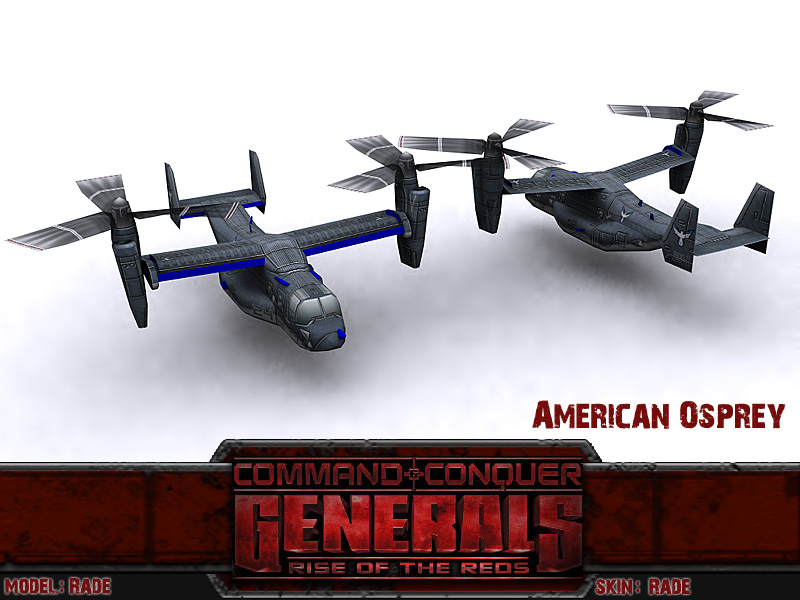 The United States Airforce had long been looking for a replacement for the aged but functional Chinook Helicopters. It's long service record indicates how difficult it had been to find the right helicopter to replace the ninety year old workhorse of the Airforce. The Osprey program had been running for a considerable time now and the fruits it yielded were ready to be harvested. With mobility growing increasingly important in warfare against distanced foes across the globe, the CH-47's limits were becoming apparent. As a hybrid plane combining the virtues of both the C-130 transport aircrafts and VTOL heavy lift helicopters, the V-22 Osprey finally met its true potential and was found ready for widespread active service. It will be replacing the honoured chinook helicopters in supply and troop transport duties.

Now onto some gift's if you will. Below we have printable 18x24 inch Tech tree posters for the 3 factions in 1.5. If you wish to download them, clink on the link below :D 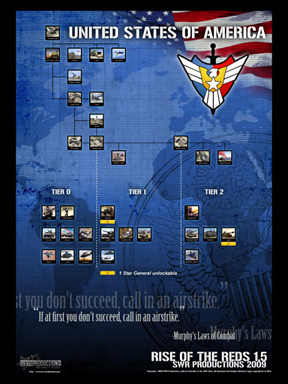 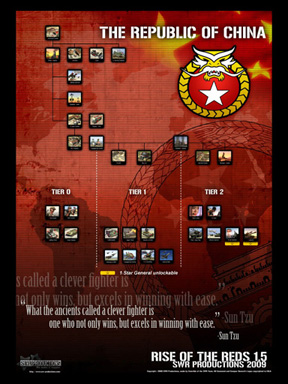 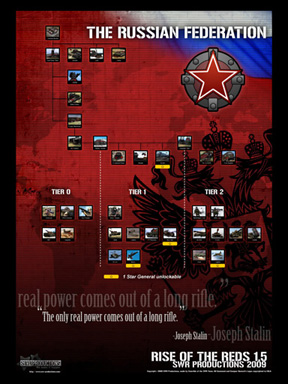 Just recently I bumped into a fellow deviant art member and stumbled upon his marvelous work only to be greeted by the following fantastic fan art by ImperialGerar.
Check out his fan art of the Russian Shock Trooper below! 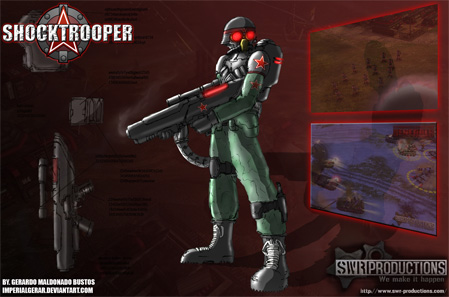 Check out his other works as well, there's something in there for everyone!

It's that time of the year again and we'd like your support! Please vote for us for the 2009 Mod of the Year Awards below, best of luck to all participants and remember, it's not just one mod you can vote for so vote for all your favorites! 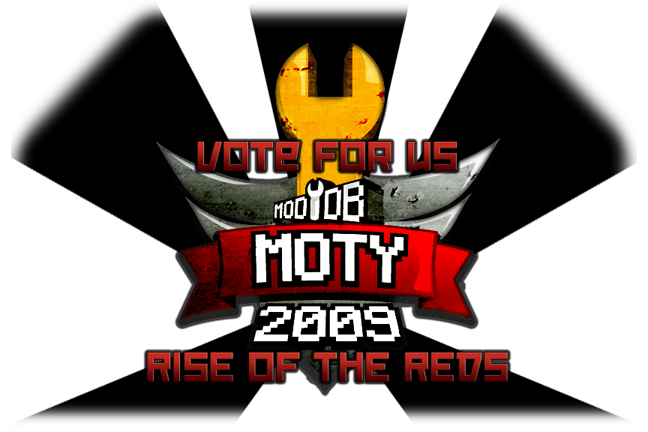 And thats all we have folks, we hope you have enjoyed this update and we'll see you next time for our upcoming updates concerning the ECA and GLA.

nice man i just hope we hear again from you guys before Xmas xD, i know you said one of your goals was to finish in the following months, lol don't take it to fast take your time and will the next version be 2.0 xD