Wow... It's been literally a year since we've posted anything on this page and today's the day I explain why. Before you ask, no the project isn't dead but we have some roadblocks in the way.

Wow...It's been literally a year since we've posted anything on this page and today's the day I explain why. Before you ask, no the project isn't dead but we have some roadblocks in the way.

For those that don't know, there aren't many of the us left on the team. In fact, there's only two of us still truly dedicated to the game; The storywriter and myself, the lead developer. Unfortunately with college hogging more and more of my time ever since the Beta release, my time grows ever more scarce as each college term passes.

Beta 1.2 was supposed to be released in September 2013 but financial problems within my family as well as events that happened throughout my college campus forced a change of plans. That and my last computer decided to rage quit on me in May 2014 and it took a few months to get a new one. I was lucky enough to backup the data of the game but without a computer, development was effectively brought to a screeching halt. Luckily, a family friend saved us by helping me buy a new computer.

Self-explanatory. We need artists. Modelers primarily but anyone good at making textures too would be a great help. Preferably ones who are familiar with the UDK.

One thing: There's no money involved. The only thing I can pay you with is your name listed in the credits. I'm very sorry but this is after all a non-commercial game and I barely have any money myself. Don't know what else to tell you...

Also, thank you to everyone who have patiently waited for this game over the years. Rest assured, it's not dead but if you guys wanna see this game anytime soon, we need help. Badly. The game itself is more or less functional by now but we need artists to put the final touches on it.

Finally, I know it's not much but here's some latest screenshots of the progress we made and a taste of what's to come in the final version, courtesy of Alfie Feltham (for the BSP geometry work). 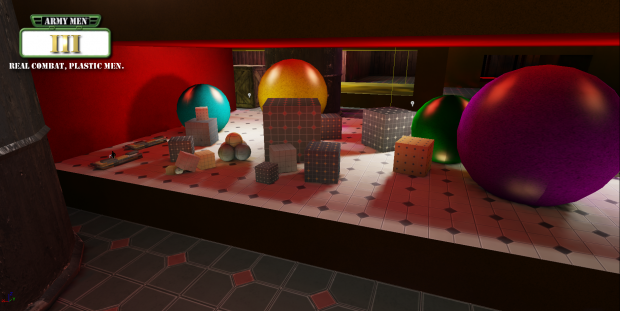 Awesome waiting you :D Can I get your skype/Fb ?

Those pics are great mate, cant wait for the next version! All of the army men fan base backs you up! :D

Can anyone answer my question still sitting on the main page? And, glad to hear the game is still in development!