This article outlines the changes and added features in Zombie Apocalypse v. 1.0.

With this update the mod finally resembles the original image I had of it in my head way back in May. I now consider Zombie Apocalypse mostly feature-complete, and because of this I am calling the Alpha 7 release version 1.0. I will continue adding new features to the mod, but from this point on I will be expanding on my original vision of the mod instead of building up to it.

This is NOT the Alpha 9 release.


Tynan has gifted us with yet another impressive update to RimWorld. There are many more features in the new RimWorld update than I am going to cover here, so I'd recommend heading over to Tynan's blog post to watch his Alpha 7 release video and get the full list of new features.

The major features for this release include: melee weapons and melee combat related skills and traits; expansions to the medical system in the form of diseases, organ harvesting/transplants, amputations and prosthetic limbs; a new material system that allows you to make many things, such as walls, furniture and clothing, out of arbitrary materials (also known as the "Stuff" system). And of course this includes new kinds of materials like leather harvested from animals and new minerals that can be mined; a new trade system; and many, many more changes.


With the new Alpha 7 features I was finally able to implement a feature which I think we can all agree has been absent from the mod for far too long. I'm talking, of course, about Zombie Leather Cowboy Hats! 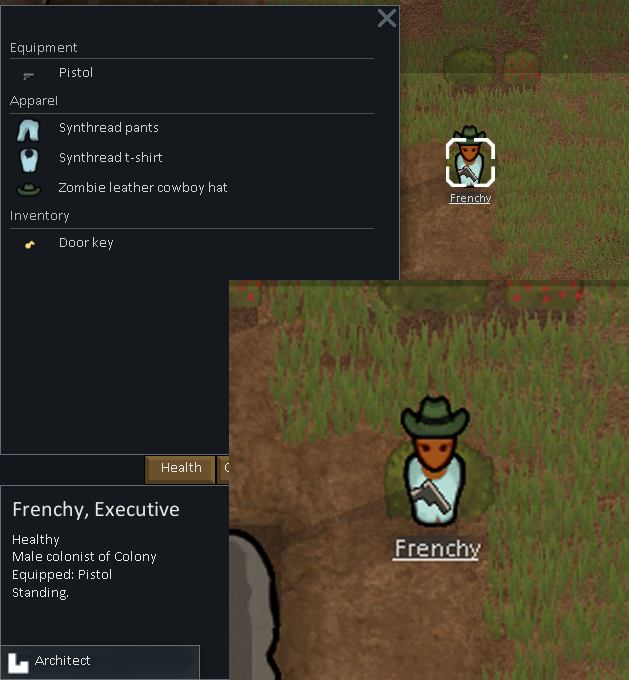 Thanks to the new Stuff system you can now skin animals and people for leather. That means your colonists will be able to hunt zombies while wearing their fallen zombie friends and family. And of course all clothing made out of zombies will have that nice familiar zombie-green color!

I'm sure Zombie Leather Cowboy Hats is more than enough to get you excited, but just to be thorough let's talk about the many less exciting features of the Zombie Apocalypse 1.0 release:

With the addition of Melee weapons and Melee skills I really wanted to support and encourage Melee combat in Zombie Apocalypse. After all, while guns are extremely effective for crowd control if you have to take out many zombies at once, if you only have one or two to deal with the most efficient way is always just to knife them in the brain. But there is an obvious risk involved in letting your colonists get too close to zombies, so I have made some changes to give you ways of mitigating those risks a bit.

Now, if you're a zombie hunting pro who spends all day stabbing zombies repeatedly in the face, obviously you are going to be extremely skilled at making sure your favorite limbs and extremities don't get too close to the mouths of your victims. With the addition of the Melee skill the game now tracks your colonists' zombie-mouth avoidance abilities, which now reduces their chance of being bitten.

On top of that, Melee weapons and attacks are now far more effective against zombies. I removed the 50% resistance to blunt damage mostly because now that damage type applies to more than just bare fists, but also because I felt that with the 50% resistance to certain types of melee damage the zombies could be just a bit too difficult to deal with when you accidentally let them get in close.

I also wanted to make things like Knives and Swords far more effective against zombies than anything else. All Cutting weapons, which includes Knives, Shivs and Swords, now get a base 200% damage bonus to zombies as well as extra damage based on Melee skill, and an extra chance at instantly killing them with a swift stab to the brain. The base chance of a kill shot with a cutting weapon is 25% for a colonist with a Melee skill of 0, and it goes up to 65% for a colonist with a maxed out Melee skill.

So hopefully these changes are enough to make Melee combat against zombies much more appealing than it used to be. 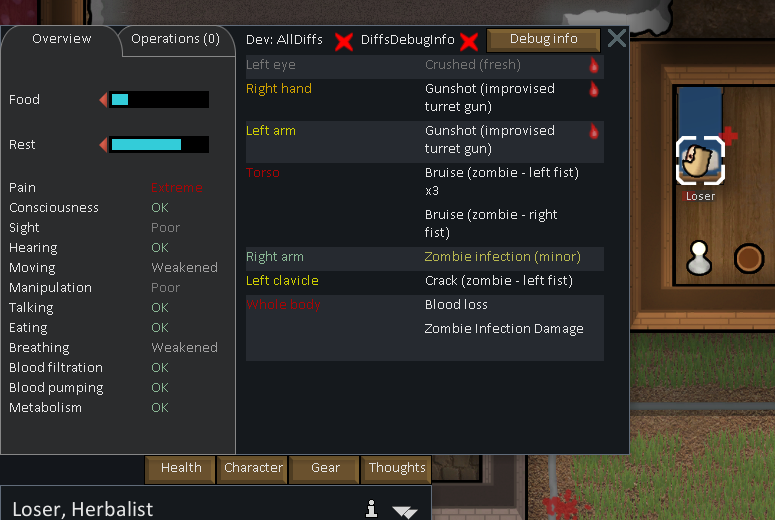 - There is now a "Zombie Infection" disease that infects the area of zombie bites. This disease will have various detrimental effects on a colonist's health, in addition to the usual damage that the infection deals. The Zombie Infection will be visible in the Health tab of any bitten colonist.
- The damage done to colonists by zombie infections has been slowed considerably to compensate for the added health debuffs.

I was able to take advantage of the new disease system to make zombie infections apply only to the part of the body that has been bitten. This means you can now see the zombie infection listed in the health tab. It also means that there are now certain health debuffs that your colonist will get from having the disease, depending on the severity of it.

And because of those debuffs I have decided to slow the damage that is done by the disease. Your colonists will live much longer after being bitten, but eventually they will no longer be able to function and they will slip into unconsciousness until they die.

- The red blink damage effect for bitten humans has been removed.

The blink was no longer needed since the zombie infection now shows in the health tab.

- Any bitten limb can now be amputated, curing the colonist of the infection, but leaving them with a permanent disability. This only applies to infections on limbs and parts that can be removed.

And of course with the new amputation system I had to add what is easily the most requested feature to date! If your colonist has been bitten on a limb or body part that they can live without, that part can now be amputated, saving them from the infection. It will leave them with a permanent disability, of course, but that is better than being dead. And you can always replace lost limbs with robot limbs later anyway. 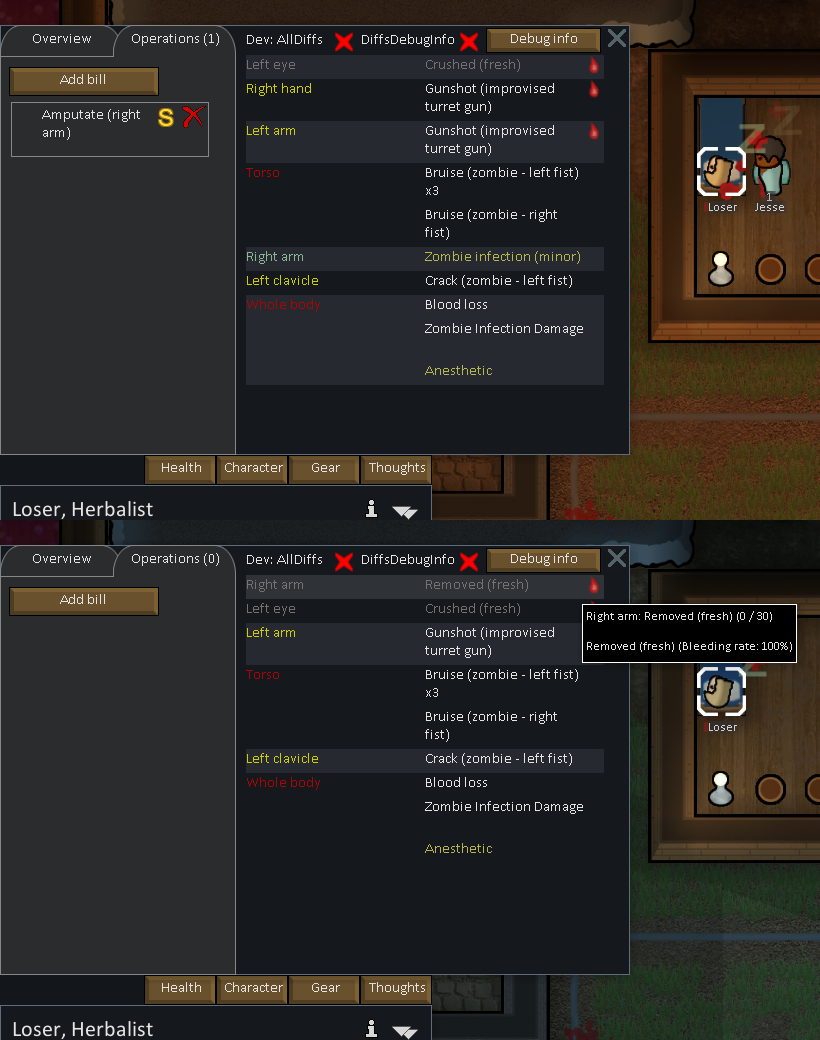 Of course this only applies to certain limbs. Your colonists can still be bitten on the torso and head which will be fatal. But at least now you have a chance at being able to save your colonists, and I think that will make many people very, very happy.


As always if you like the mod and appreciate all the work that has gone into it you can show your support by following, reviewing or rating the mod, or leaving some feedback in my thread on the Ludeon forums.