This article outlines the key features and changes to the Zombie Apocalypse Alpha 6 release.

Zombie Apocalypse has been updated for Alpha 6! Sorry for missing Alpha 5! I was especially busy during the month of July, and it shouldn't happen again.


A lot of cool things have been added to RimWorld since the last version of Zombie Apocalypse was released. Alpha 5 brought us sieges, a nice gear system, and finally an endgame that allows your colonists to leave the planet in an escape ship. Alpha 6 introduced an awesome new world generation and biome system, working personality traits, and a completely revamped medical system which allows you to lose limbs, receive brain damage, and have your eye chewed out by zombies.

Out of all of these features the one that obviously has the biggest implications for Zombie Apocalypse is the medical system. I haven't yet had the chance to take full advantage of this impressive new system in my mod, but you can be sure that I will. For now it means that zombies can be slowed even more from limb shots, and killed instantly with head shots. And when your colonists are swarmed with zombies and somehow manage to survive, you can see all of the places on their body where they have been beaten and bitten (but don't worry, not every bite infects!).

In the future I plan on moving the infection over to the medical system, which will allow me to really easily make them curable: a feature most people seem to want. 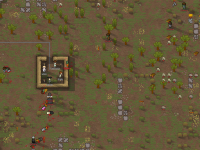 
All right, so let's take a look at the changes since the last update. Some of these will have a pretty big impact on the gameplay.

- Zombie hoards and the airborne incident no longer rely on the storyteller to happen. Instead they will happen regularly on a random timer.

Late in Alpha 4 some people were reporting that zombie raids seemed to have stopped. I'm still not completely sure why that is, and it seems to have persisted into Alpha 6. As a temporary measure I have moved the zombie incidents out of the Storyteller's control. This actually might become permanent because so far I really like the effect it has on the gameplay.

Here's how it works now:
- Both the zombie raid and airborne virus incidents now work on a randomly set timer.
- The length of the zombie raid timer will range from a few days to a couple weeks, and the very first timer (set at the start of the game) will be even longer to give players a chance to build up defenses.
- Zombie raids will happen regularly. Each time a zombie raid happens the timer will be randomly set for the next raid.
- The length of the airborne timer will range from a couple weeks into the game (so no more day 1 airborne virus) to longer than most people will play a round for.

These changes mean that zombie raids will no longer be competing with other events for the storyteller's attention. Zombie raids are now guaranteed to happen regularly, and they are also more likely to happen close to other big events, like other raider spawns.

This also means that the airborne virus incident is no longer an inevitability. In some games it will happen early on, and in others the timer will be set for much longer than you intend to play. For example, I watched a streamer play an 11 hour long round with Zombie Apocalypse active last night and the virus didn't go airborne in that time.

The old way of determining hoard was some combination of time you've been playing and the number of colonists you had. This method has persisted since the Alpha 3 version of the game. In Alpha 4 the standard raids started taking your wealth and strength into account when determining their size. In Alpha 6 the game now allows players to choose their difficulty. With these two things in mind I decided it was time to change the way zombie hoard sizes are determined, to allow the mod's difficulty to scale in a fashion that is similar to the rest of the game. This means the zombie hoards should be much easier in the early game.

- Since corpses now decay completely over time, really old corpses (the skeletons) will no longer reanimate.

This one is pretty obvious. If you have a massive graveyard full of corpses and the airborne virus hits, only the fresh corpses are going to dig their way out and start eating your colonists. This should reduce the need to burn corpses during the entire game on the off chance that the zombie virus goes airborne.

- All non-Colonists now have a 1/500 chance of being bitten when spawning on the map. This includes both visitors and raiders.

That's right! Visitors can now be pre-infected on arrival, so if they die before they leave you better watch out! This is actually a really small chance though. I might increase the chance in a later iteration.

- You no longer receive warnings when non-Colonists are bitten by zombies.

It was kind of annoying getting notifications for a dozen different enemies or visitors who got themselves eaten by zombies. Also, less notification means you have to be more aware of what is happening on the map, which is always fun.

Just a small change because I didn't like the way the old ones were labelled.

Thanks For Your Support!


Well, that's it for the changes. I hope you guys enjoy the mod, and as usual if you have any questions, suggestions, compliments or complaints you can comment here on ModDB or on my thread at the Ludeon forums. Happy zombie hunting!