MrCreepyPasta is now on board for Ready Freddy and the release date has been set back. 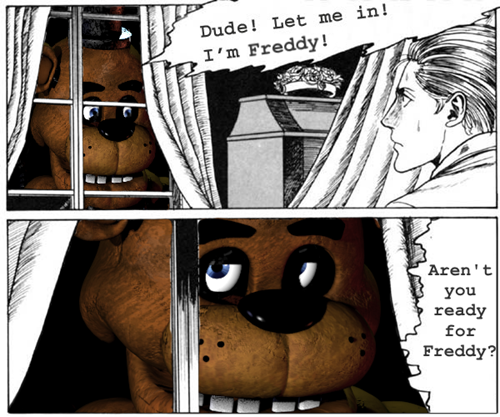 If you are reading this, then you are probably somewhat interested in my upcoming title, Ready Freddy. Well, I have some news for you! I will be posting a new game update bi-weekly until the game comes out! These updates will include new screenshots, new wallpaper art for your desktop (Ready Freddy or just FNaF), and some features that are being added to the game! Here is this update's news.

MrCreepyPasta is now on the team! Yes, the best creepy pasta reader on the internet is going to be voicing character(s) in Ready Freddy! Get excited, folks! Go check him out while you are at it!

There is unfortunate news for this update as well. The release date for Ready Freddy has been set back. We want you to know something important though. This setback is so that we can have more time to make this game really amazing. If we would have kept the same release date, the game would be incomplete, and would have major setbacks to its overall look and feel. We really want you to know that!

We know that this isn't much news, but next update will have much more prepared to show you!
Thank you for reading!

Thanks for the news GreenMan, I can't belive MrCreepyPasta is going to voice in your game. Also thanks for the weekly updates, I'am following this game for some time now and I always like to see progress in making, and you can take as much time as you want in making this game, I'am looking foward to the demo relese or full version when it comes out :)