We talk about what the Foxhole dev team is working on.

There has been pressure from both the community and internally to make better use of the secondary equipment slot. To that end, we will be introducing a new pistol in Foxhole in the near future.

This will be a high caliber revolver that will be useful in clutch situations where ammo has been depleted during a fire fight. This weapon will fire 6 shots, have a very high recoil, and will deal a lethal amount of damage. Below is a finished version of the model. 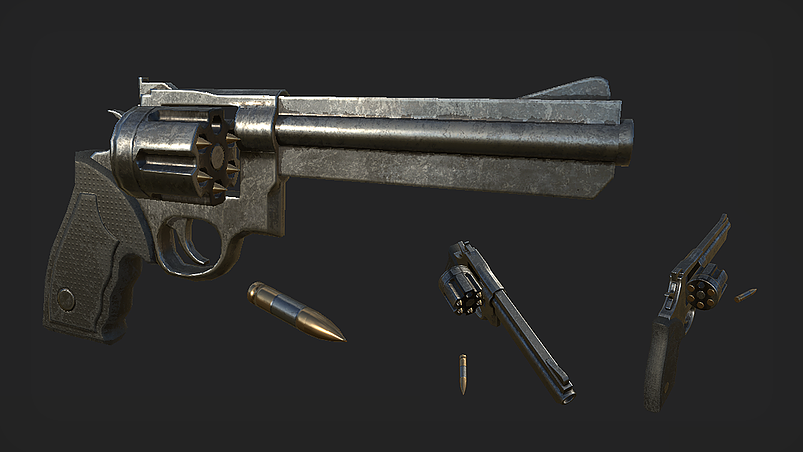 Before diving deep into creating the next map for Foxhole, we're going to be revisiting the design of Callahan's Passage. We originally made this map to feel more linear than our other maps to provide a contrast to Upper Heartlands. After seeing many wars play out over the last month and a half (has it already been that long?), we've concluded that the linear nature of the design clashes with our goal of providing players with as many strategic avenues as possible. There are also some specific problems with the map, such as the production bottlenecks that occur at The Latch during early phases of a war.

Below you can see some rough notes on how we intend to change the map. Our goal here is to maintain the feeling of a circular road littered with towns surrounding a lake, while removing all linear pathways. 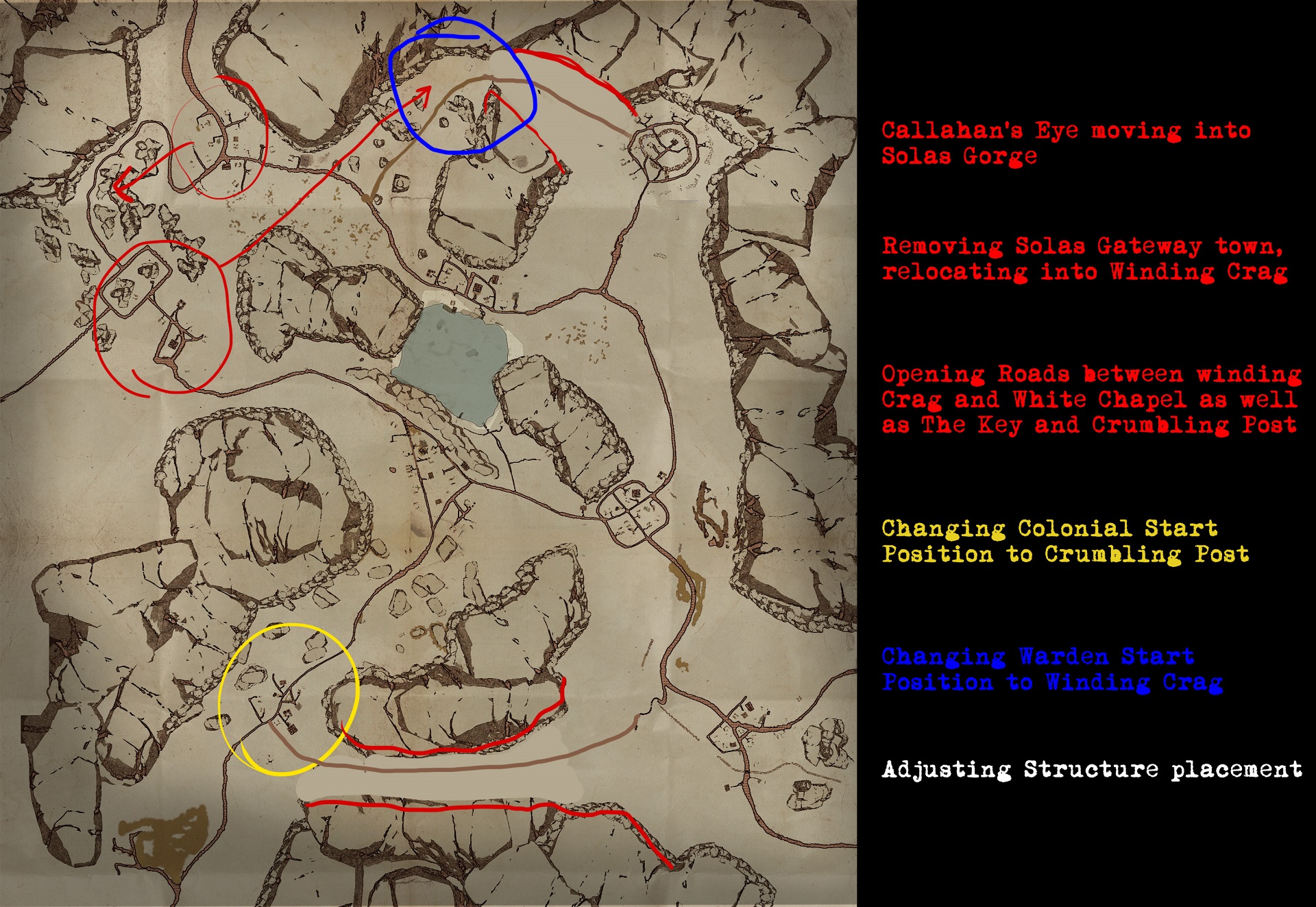 Since last fall, we've been working on redesigning the characters in Foxhole. This has been a long term and ongoing process that won't be complete any time soon. However, we wanted to take the time to share some of the progress we've made.

After going through many iterations, we've finally settled on some designs in the concept phase that we are happy with. A lot of our stress was in finding designs that fit the factions thematically, while feeling grounded and true to the WW2 atmosphere of Foxhole. The next major challenge is in translating these designs into the top-down perspective of the game.

Below you can see our concept targets for what we consider the default Warden and Colonial outfits. 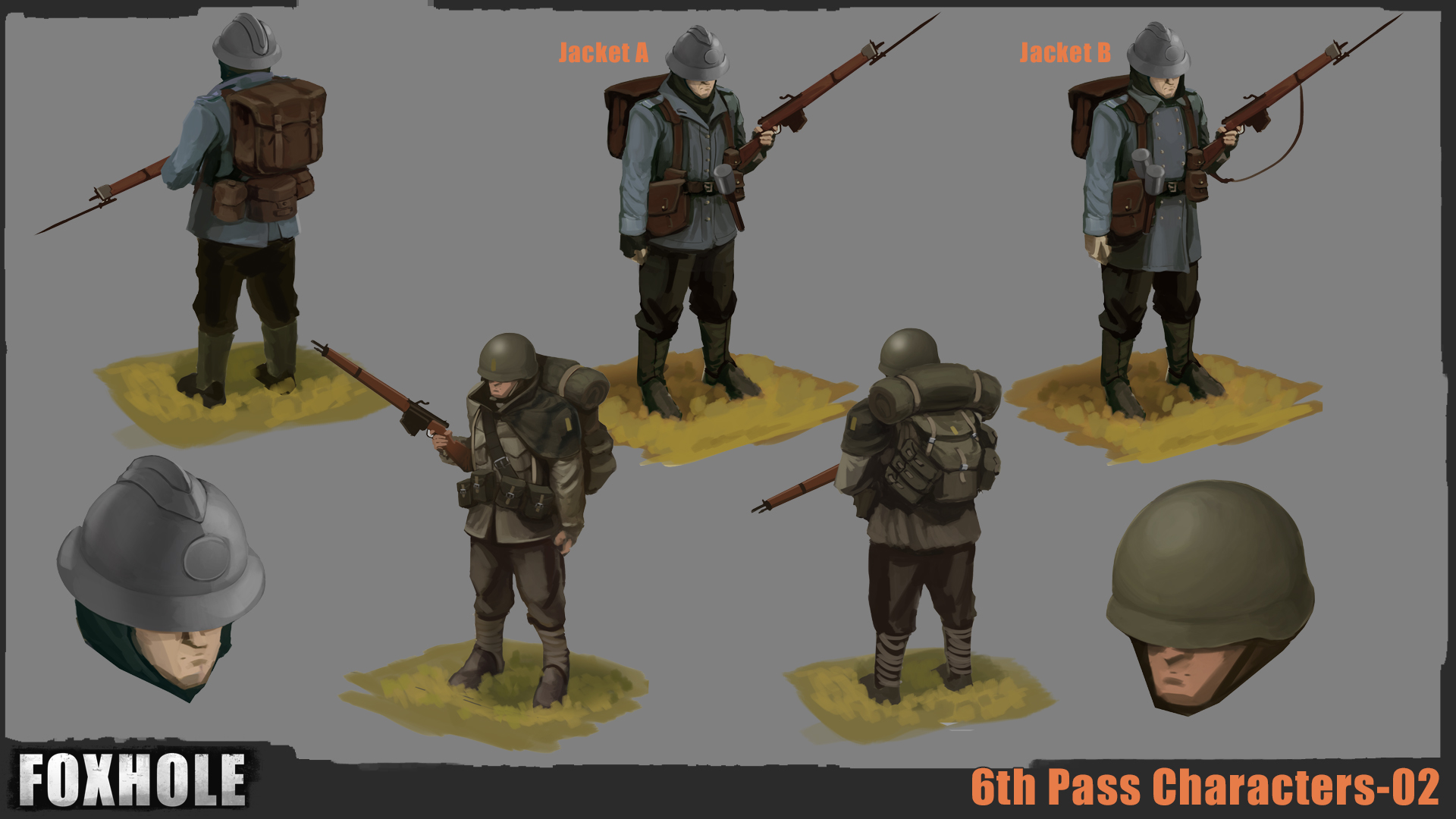 This image below shows some earlier concepts and also contains some designs we may flesh out further in the future. We are specifically interested in exploring the bottom right Colonial scout outfit. We eventually would like to have different outfits that players can equip that will have trade-offs with regards to damage mitigation and stamina drain among other things. This is a feature that will be dealt with a lot later on in development. 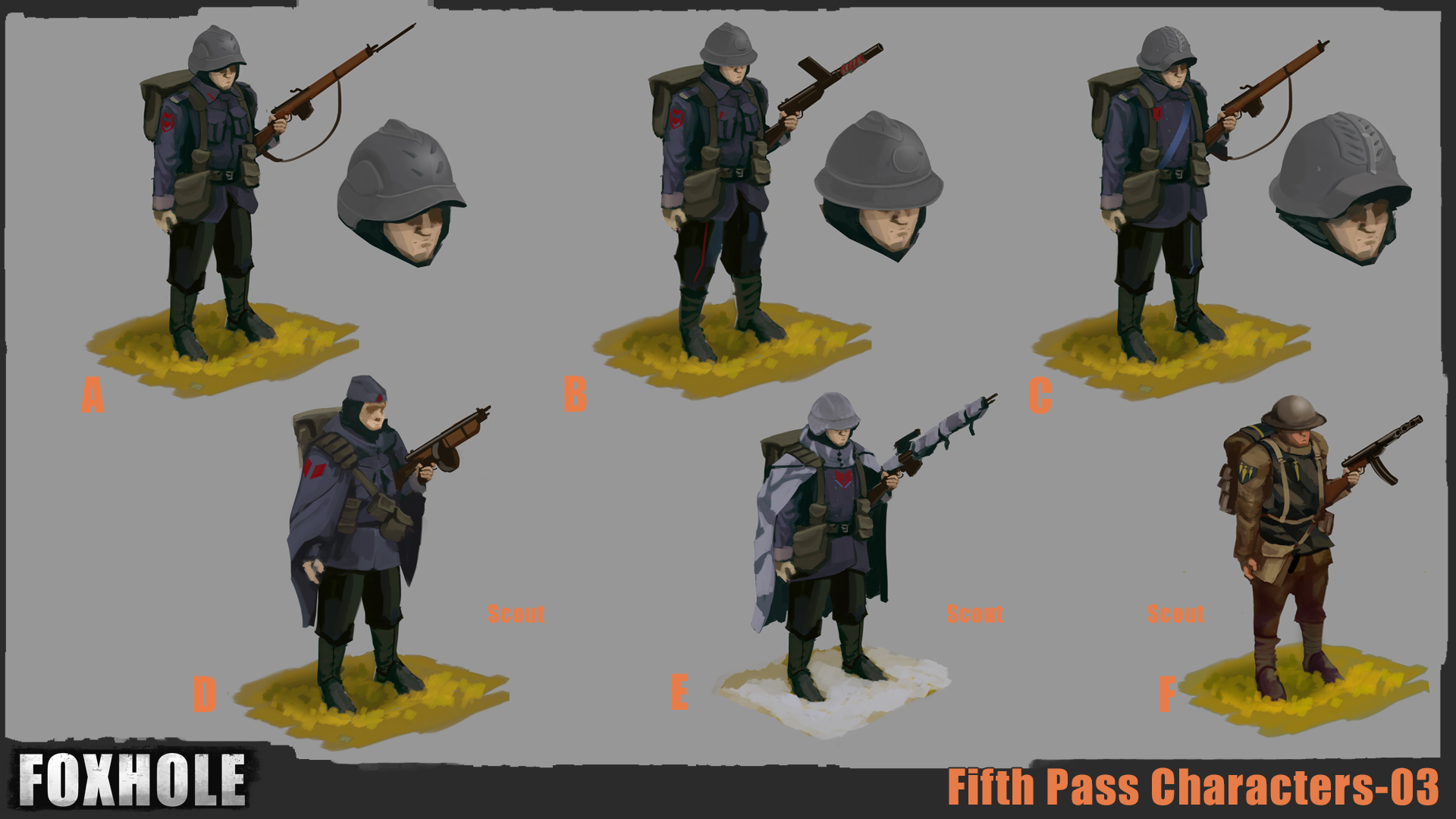 We have big plans to revamp the way that resources are procured and moved around, but this is one feature that fortunately can be broken down into smaller iterations. In the first iteration, we will be doing two things. Firstly, we will be splitting Salvage up into two sub resources, Scrap and Components.

Scrap will essentially fill the role of Salvage as it exists in the game now and will be found near towns. It can be salvaged into Basic Materials, which can be used to build and produce most essential structures and items.

Components will be extracted from ancient vehicle husks and other remains found in the environment. These will be found largely in areas directly between towns so players won't be able to procure them without venturing out their town fortifications. A new item, the Sledge Hammer, will be required to extract Components. Components can be salvaged into Refined Materials, which can be used to build and produce higher end structures and items. 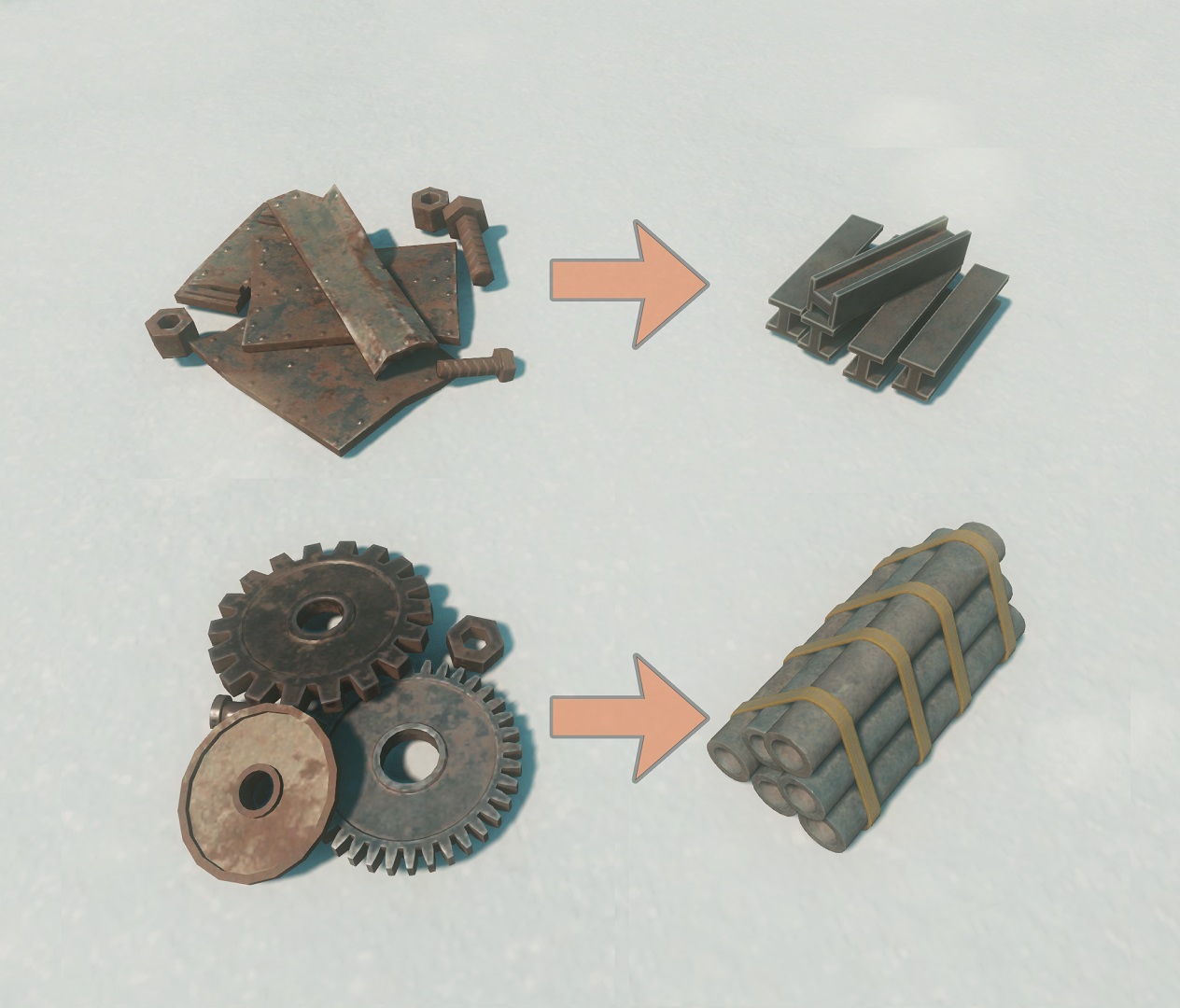 We are going to be exploring the idea of structure upgrades in the next update. Like most new systems we introduce in the game, we're going to be implementing this for a single piece of content first before applying it across the board. Walls are going to be the first structures in the game to have upgrades. We've also taken this opportunity to revamp our wall designs in general, so that they have a refreshed look and they all have a unified length.

The upgrade system works in a straightforward manner. First, the base version of a wall structure is built (Chainlink Fence). The player can then approach the built wall and then press 'E' to invoke the build site for the upgraded version of the wall (Reinforced Wall). In the case of the wall, it can be also upgraded to a third tier (Fortress Wall). We hope this will make the lower tier walls more viable during early phases of a war.

Below you can see all three tier of walls. 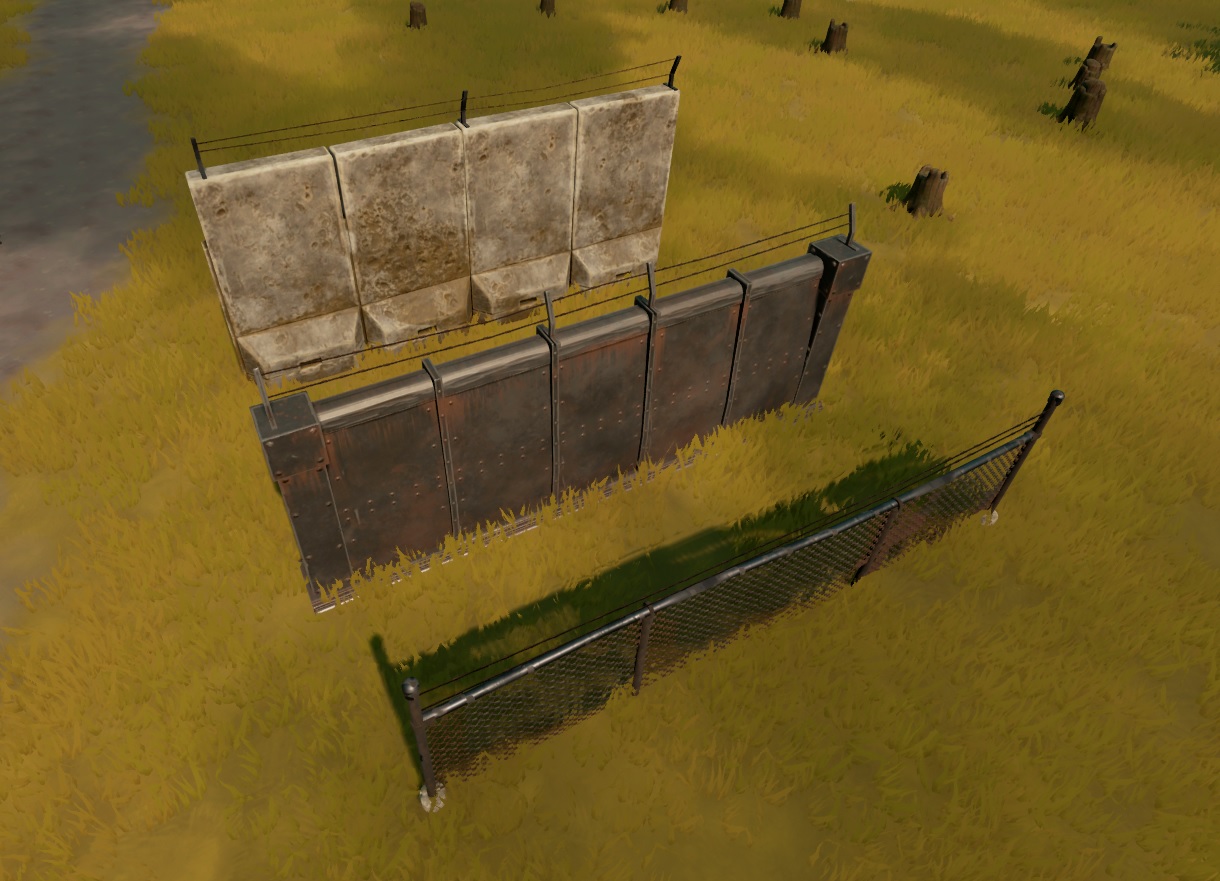