Bad Fur Day Remake is back with a new engine, new ideas and new graphics. Bad Fur Day Remake has migrated from "Torque Game Engine 1.5.2" to the new "Torque 3D" engine (Binary). This exciting change for BFDR has resulted in numerous advantages and well as some disadvantages. 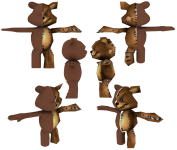 Bad Fur Day Remake was originally going to be an exact remake of the classic N64 game with the exception of the port from the Nintendo 64 to the PC; but times have changed. The engine change was intentional to allow new and improved graphics. Does this mean that it will look different from the original Conker's Bad Fur Day game? The answer is yes and no; the graphics are being updated or upgraded as seen from the image on the side but the overall style will be the same. The only difference's you'll notice will be the improved visuals, the game play will be the same (Exception of N64 to PC).

We're currently looking for someone to create new audio for BFDR. We are also looking for Texture Artists to create textures for the new 3D model unwraps and recreate the textures from Conker's Bad Fur Day.

"I want to help out but I can't commit to working long term on the project?" No time, no worries. We have a section on the Packers Remakes Forums called Community Submission that will contain a list of textures, files and audio that will be needed. Community members can jump on the forums, find audio files or textures that need doing and repost their finished work back onto the forums to later get implemented into the game. This will help reduce the work load for anyone working on BFDR and allow the community to help create Bad Fur Day Remake without any long term commitment.

hilariously I was just talking about conkers today, reminiscing fondly on a great game.

WOOOOW I was a fan of that game!

This is one of my favorite videogames, specially the multiplayer part

Sadly I first played the Xbox remake, But from that I could see the game was A+ work.

Oh jeese, so many good memories.

So online multi player? if so finally i loved this game

please finish this! i loved the game so badly

Dont just redo it guys, make it much better and newer with a whole new story and jokes!

OH hell yeah. I played this game for hours.

I was so ****** when I found out Live And Reloaded didn't have the old multiplayer.

omg I was too!
I went to extremes and got the N64 again just to have the game xD

I hope to complete it, good luck!!