Today I was browsing through my screenshot archive and stumbled upon old internal screenshots from early development versions of the game.

Today I was browsing through my screenshot archive and stumbled upon old internal screenshots from early development versions of the game. They're quite interesting and covering the rough development path. I've never intended to publish them publicly, but by browsing them I thought what the heck! It would be fun to show you :)

When I started developing engine for the game in April 2007, I had pretty clear idea how to create 3D rendering part of the engine based on some previous experiments and theory gained over the years. So after month or two I already had pretty screens:

The lighting part in the old version of the engine was based entirelly on dynamic shadow maps and per-pixel lighting. Later I've found this doesn't scale well to bigger maps and more lights. I've realized most lights will be static anyway, so I later redesigned the engine to use static lightmaps that are smoothly blended with dynamic lights and shadows. This is not classic lightmaps, but more of light coverage maps. For each light there is separate lightmap consisting only of luminance. This approach allows to combine per-pixel lighting and lightmaps.

I'll show more about engine evolution in the following parts. In the meantime I was researching human model and how to animate it and create clothes. First approach was very ambitious. I've developed simple tool to load and animate MakeHuman's human model and animate it properly maintaing proper deformations and stuff. Part of it was also clothing. I've created cloth simulator as seen on the screenshots (February 2008): 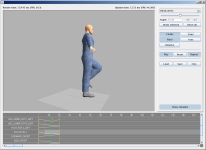 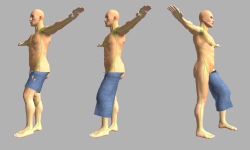 Unfortunately it proved as futile attempt because of poor performance and complexity. The clothes system was not behaving well at every situation, biggest problem was that the clothes sometimes passed through the body and the simulation was ruined. So the idea was abandoned and I've created classic rigged model in Blender instead. However I've found later some techniques that are much cheaper and stable so it's still possible that some dynamic clothes would be implemented in distant future :)

This is all for now, keep checking the blog for additional parts :)

BTW, currently I'm working on grenades (along with minor bugfixes and missing features such as invert mouse or vsync) and planning next release hopefully next week or so.