It is now officially the beginning of the fourth week of Open Beta! This week we have a nice collection of bug fixes, map fixes, and new content for you. If you read this week's changelog, you may notice a couple of brand new features listed. First off, the game's scoreboard has been changed. Lebson has incorporated a great side by side design to replace the old top/bottom scoreboard that tended to get get cut off in semi-full servers.

Posted by WinstonChurchill on Jun 5th, 2010

It is now officially the beginning of the fourth week of Open Beta! This week we have a nice collection of bug fixes, map fixes, and new content for you.

If you read this week's changelog, you may notice a couple of brand new features listed.
First off, the game's scoreboard has been changed. Lebson has incorporated a great side by side design to replace the old top/bottom scoreboard that tended to get cut off in semi-full servers. The second item that I am sure everyone is excited about is the new G43 model. Please bear in mind that the new animations and textures to go along with it are still works in progress, but at least you don't have to run around with that G43-Kar98 hybrid anymore. The last new feature I will mention is rnl_LaFiere. We have had several media updates that gave you a look at La Fiere, but now you can finally play it. RnL veterans may get a couple flashbacks, but everyone is in for a fun time on this amazing map.

You can download the Open Beta 1.3 Patch below as well as check out the featured screen shots and read the changelog. Once you're done downloading, please make sure not to join one of the not- yet-updated 1.2 servers but choose one with 1.3 in the name. 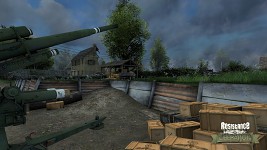 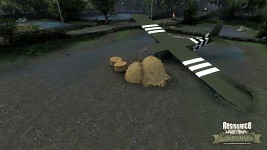 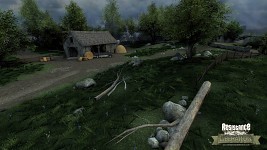 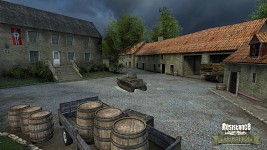 Ohh..and we're this month's "WINNAR!!" on ModDB spotlight. So check it out and take a look at the other cool mods there, too.

I love how you guys update every week, it lets us players know you are dedicated to our game experience.

And sorry for mentioning it here, but are you guys trying to fix the ironsight problems were the transition from hip to ironsight fails?

JESUS CHRIST! This mod team is in BLITZKRIEG MODE! Pumping out new versions over and OVER so FAST!

First Anschluss, then Poland and now France! Version by version, the war on bugs is being won!

So crazy... how is this not on steamworks yet? this is way better then a lot of the stuff already up there *cough* zombie panic source *cough*

thats because zps is "ALOT" more popular, btw I hope this patch fixes the latency issue me and my friends had, or it wasnt ms all weapons was just completly bugged

Nope, we're still working on that one. It appears to be a problem buried deep within the engine.

Nice work guys! this mod rules! Once you get all the technical stuff sorted out, you should try to get this on steam! (as a Free 2 play mod, of course)

Awesome, love the constant updates. The only problem is every map you churn out seems to not be optimized at all and gives me, and most of the people in any given game, massive FPS problems.

That has nothing to do with optimization but with our map sizes. They're just huge for Source maps, with all this foliage surrounding the maps. They're pretty well optimized already and anything else we can optimize now will give you another 3-5 FPS. We will optimize it more but don't expect 30+ FPS gains.

Never played this mod before, so decided to give it a go. Downloaded the installer, and then ran it only to not find any servers. Turned out that this was just a patch to the full 1.0 version which I had to download and install first, but I didn't notice it when downloading, and the mod ran just fine even if 1.0 hadn't been installed from before.

Just a heads up as there might be others that'll download this version, find no servers and then just think the mod is dead and move on...

That's why all the downloads say that you need 1.0 first.

Don't see any mention of need the 1.0 version in either this news post or on the download page here on moddb.com ...

We'll make it clearer in the future.

Make sure you installed 1.0 first.

If you downloaded the .zip version, make sure the game folder is named "RnLBeta"

I love this!Mixed with annual plays with DOD:S, I can have the perfect weekend!

If you see no servers, make sure you installed 1.0 before 1.3 and your game folder is named "RnLBeta"

Heck, I'd play this, but when I try to download the installer, a screen pops up saying that I can't connect although my connection is good. Guess I'll have to wait... :(

Try the other mirrors on our homepage

1.4 is already out! Holy crap how fast are you guys