Testing, Experimenting and working on the low polygon meshes, and learning alot more about 3d whilst I go , is very interesting especially to learn how to improve.

As you might have seen, I have been very busy.I thought getting back into the swing of things would be easy after my break from modeling to play Alien Vs Predator and Mass Effect 1&2, but thats unfortunately not the case.

Having got back into work, working on the low poly assets is not as simple as I had hoped originally , or planned, due to my recent research into the modeling style of Epic Games, and the teams of people that create content for Unreal 3 and Gears of War.

Whilst modeling third person models, due to the fact that this is a 3rd person modification,I did some research into Epics assets from UT3 and found that there are some parts of the models I am creating that I can indeed keep high detail and fully 3d, for instance parts with depth, that make up a major part of the model can be kept as 3d sections of the model, to keep certain details, where as otherones that are not exactly important, but still need to react to lighting and such can be kept as normal maps to give the impression that they are 3d.

I think the best example is my Karasawa MK3 rifle I did a while back, by now I am sure that before reading this update you have seen most of the work I have done in the Picture and Video gallerys now, on that model, most of the low poly model is normal maps, things like some major holes in the model that are supposed to show depth in the model , are filled instead by normal maps that do the same job but only from certain angles.

Keeping this in mind, If I focus on polygon and triangle counts in 3d Studio Max, and try and get detailed meshes that look good in 3d done within the range of about a maximum of 4000 polys for each 3rd person weapon then this should be a great chance to try and improve my modeling skills and get some really nice detailed models done.

Keeping in mind that the focus on the Armored Core series of video games plus the anime and manga adaptations has always been the Robots themselfs, I am trying to get these meshes as detailed as I can get away with , whilst not taxing the frame rate too heavily.

So that in mind, I went and compared the UT things, to try and work out a Max poly count for each object,and found that these should be roughly what I should aim for in terms of polygon count, I aim to keep the count as low as possible for each object, so details that are not nessecery will be used as normal maps, but apart from that, based on epics meshes this is what I should be aiming for.

These counts are based on the maxium or near Maximum of each UT3 model, for instance, the counts for the body parts where taken from the Krall models, the VOB count taken from the Leviathan vehicle, the Carrier count from the DarkWalker, and then the weapons max count was taken from the various weapons for 3rd person, as none of them went over about 3800 for 3rd person models.

That means a Max count for one AC ingame just without weapons should be roughly, 13000 polys all together, then add in say 4 weapons and an extension and that brings the total count to,27000 polys for the entire model, which is quite steep so I am going to have alot of work to do.

At the moment I have only the high poly models to work from, I need to drop their polycounts harshly to get them to work ingame, but I am happy I have atleast abit of freedom when it comes to polycounts, mainly because Unreal Engine 3 can handle such details.

I will of course be experimenting in future to see if I can pull all this off right, so you may see pictures in future of my experimentations. 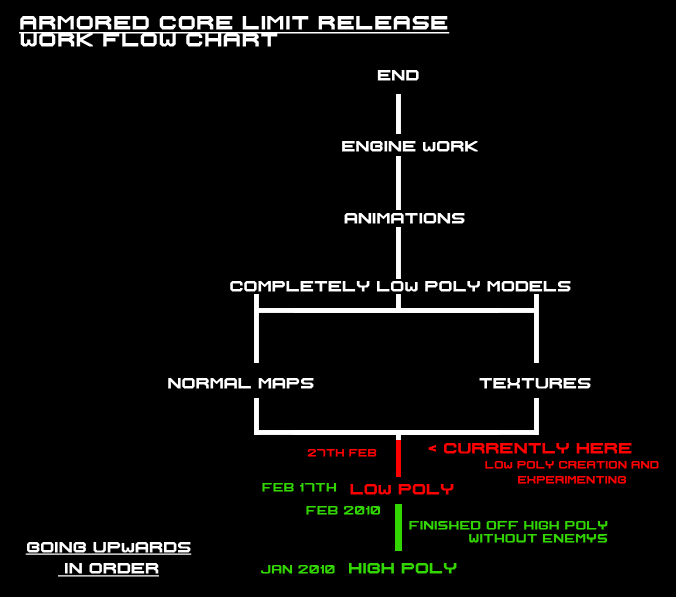