A Republic at War news update for the month of June, 2013. 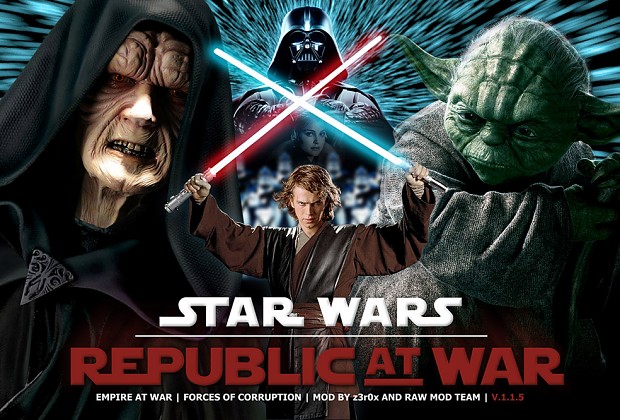 Current Project Status
With the official beta period wrapping up today, we've begun the process of packaging everything up and prepping it for its public release this Sunday.

As promised, we've posted a balance change log that lists every balance adjustment that has made its way into the v1.1.5 release. The total stands at 879. Having said that, there is still a lot of work to do and we will be continuing this trend as we move towards the v1.2 expansion. With new units come new balance issues and we'll be addressing those. View the change log here.

A (current) list of the known bugs/issues can be read here. As of this writing, anything not faded out is still present in the v1.1.5 release. We will be moving to address these issues at a future time.

Revised Game Manual
The revised game manual is in production but will not be available in time for Sunday. We're working hard to get this out ASAP. The Republic at War v1.1 manual will still be available until the revised one has been released.

Download Information
The Republic at War installation package is available as both an auto-installer and a minimalist/basic package on ModDB.

The download is 1.56GB compressed (we're using .zip instead of .rar). The final file size, after installation, is 3.3GB. Be sure that you have enough disk space before attempting to install Republic at War.

Players experiencing a "Version Mismatch" error while trying to play with other RaW players need to use the "Clean XML Folder" functionality on the included Republic at War Game Launcher.

Anyone who has downloaded Republic at War before July 4th needs to do this at least once, even if the "Check Version" result comes back clean (all green lights).

More information can be found here.

My body is ready

Yes, let the hate flow through you! The Dark side is strong within you! BUHAHAHAHAHAHA-(cough cough)...Anyone got an inhaler I could borrow?

It seems that many balance issues have been fixed in this version. I just hope the pieces fall into the right places.

Is this required for the 1.2 release or will these changes be implemented?

Thank you! I can finally download it on Desura.

So long as the skirmish AI isn't as impossible as it originally was, I'll be a happy camper.

I can easily over-power 2 hard enemy AIs in the previous version.
Quit sucking at RTS.

Wow, you must be so proud of your accomplishment.

No life he has

Its summer, not much to do.

then go get a life

do we get windows 8 support? pretty please?

just go find a copy of windows 7, Faildows 8 is a mistake.
Even Gabe Newell is afraid of it.

About the Gabe thing, no, same for windows 8.

Forbes.com
EDIT:
p*a*t*t*o*n, It was just an attempt to be witty, no need to explode.

If you're successful in getting Forces of Corruption working on Windows 8, Republic at War will work just fine. Otherwise, there isn't much that we can do to help you on our end.

The patch is called focvista64 i think. its what i had to use to get foc to work on windows 8 whicg in turn allowed me to play raw

ok, could you please post a link to the file? so I can research about it and see if I really need it...

I used to play FoC all of the time, it used to run smoothly so I don't see the problem with the main game. but when I tried to install Raw v1.1 it wouldn't install... so I hope the new installer fixes this...

What sucks is z3r0x hasn't been around in months to give you guys all the new units for the 1.2 expansion, so you guys just do a patch to keep us waiting until he returns to give you those new units.

So my question is why couldn't you of waited a bit longer to get everything for 1.2 and release it then with all the fixes from 1.15? by doing this it's kinda making us wait even longer for the other good stuff.

uhh. just one issue, when you zoom in, the camera doesn't face up as before, it just zooms straight down, is that bug or is it a setting in the game?, because zooming in in this update of a mod is different from the original game's zooming mechanics

it's still lagging, not as much as before, but it's still unplayable for me.

Hello, I am having a problem in time to extract. Looks like this: The file is in unknown format or damaged. What do I do?

Yo, any word on when 1.2 will be coming out? Also, ive seen vids of the Victory Class Destroyer on the republic side, wondering if im not getting it because of a bug or is it only available in certain game modes?

it is only available when you build the (I think it's this station) Republic High Command
if you select 'custom maps' before you start, you will always have a larger 'satellite' type structure always near your base. and if you select republic High Command as the structure to be built you get options like the victory and the Star Destroyer and so on.

How do i install ?

Are there still infinite space base reinforcements in this mod (v1.1.5)?
What about removing it?

My AI wont do anytihing! HELLLP!

how did you get the AI to do something?

Mesa be needn' help! I have uninstalled then re-installed the mod from my cpu but the A.I. is broken they don't attack. I set it on hard then waited to die. They did not attack. I killed them all with 20 commandos, 10 snipers, 4 AV-7 cannons and a gunship. Please respond!

Hey so no matter what I do i get an application load error every time i try to start it.