A delayed report that this time came a lot later than the featured aircraft.

The report of the latest update is finally here, although this is not that special because the update I’m talking about was already released some time ago, the v0.9101 and v0.9102 versions.

Because this delay, I believe there is little to be said that you may not aware by now.

In other hand, now that the early access has been released I can’t make the mistake of assuming that everyone already owns a copy, so feel that I should post a proper report for them, but I apologize for this report being more simpler than usual.
In the next update I’ll try to release everything more properly timed.

As I said, this will be short report, only to reveal the new aircraft:

It is not the very beginning of the F-14 family, but the rest of the elements will be added later. 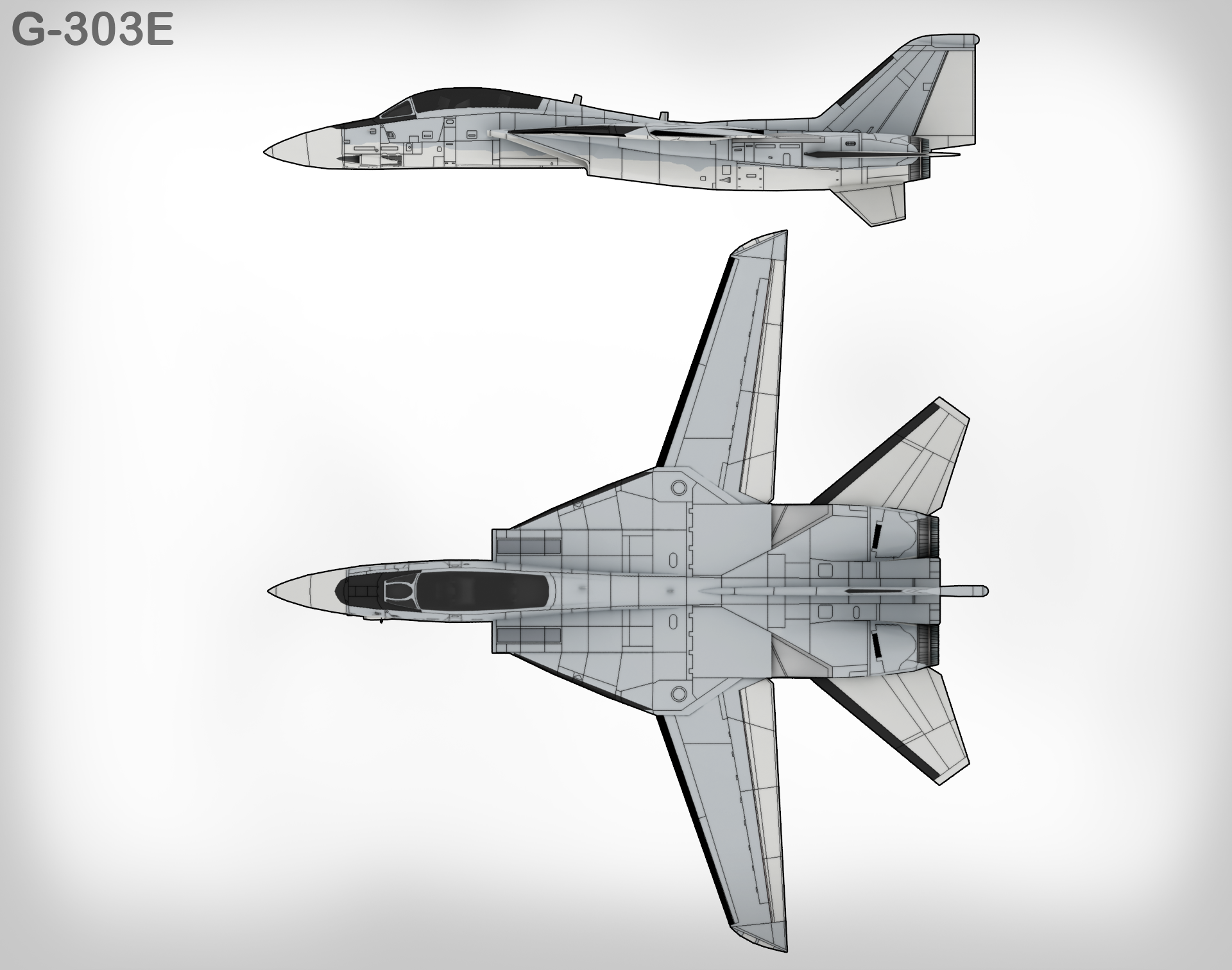 It can be easily distinguished by the single tail.
(Speaking of prototypes, I also like the other proposals that competed against the G-303, but I’m not sure if I ever be able to add them)

The YF-14 was already in as a preview, but I feel I should post it here to have a complete family 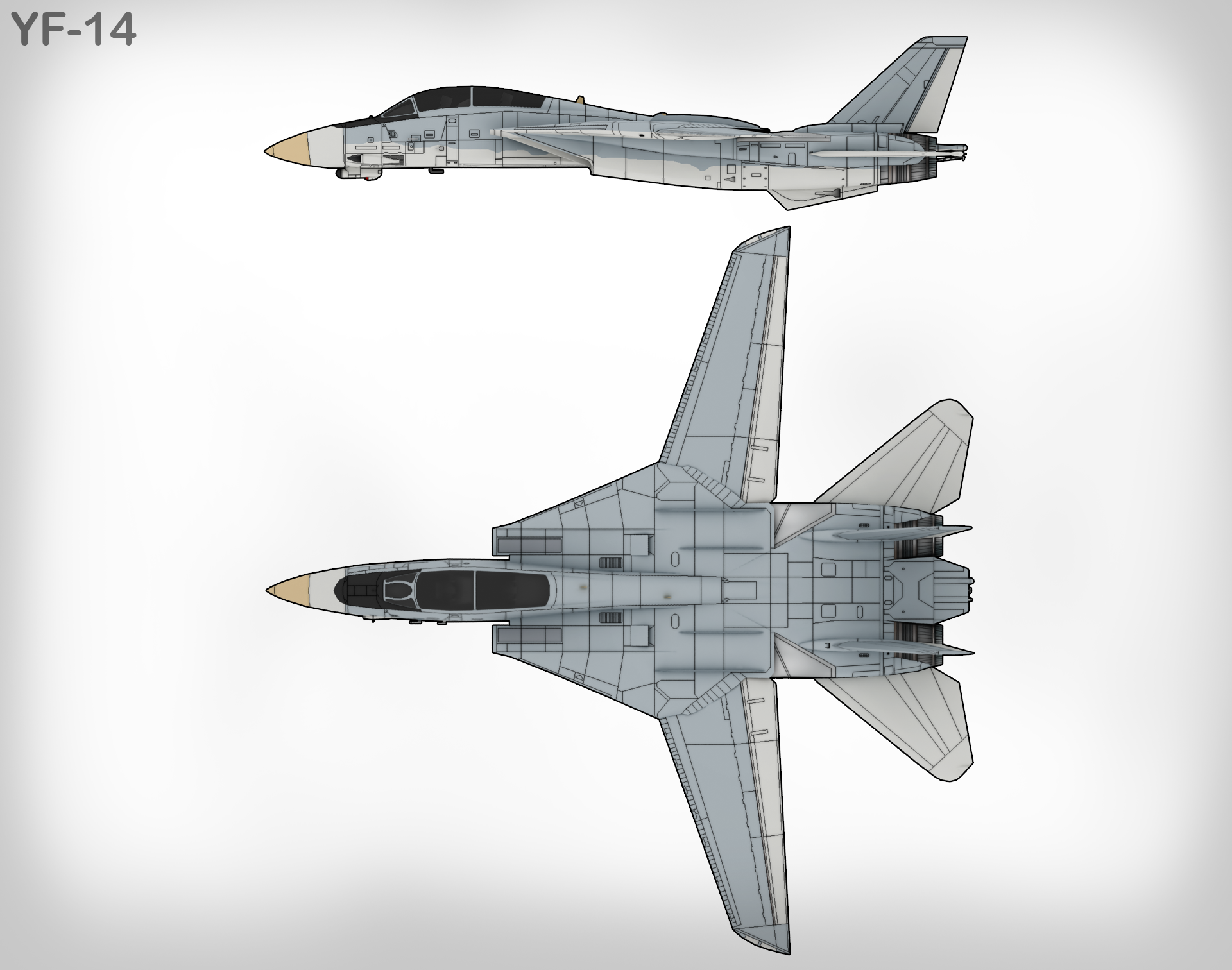 The changes in the F-14 versions are usually very small, but you can easily spot them if you know the differences, in the YF case it uses larger wing fences.

This version of the F-14A uses the new tail, some of the F-14A did in fact used this tail, but after a file all F-14A produced were build using the definite tail.

The F-14B also known as Bombcat is an upgraded version of the F-14A which feature all the improvements of the F-14A+ plus a few new avionics. 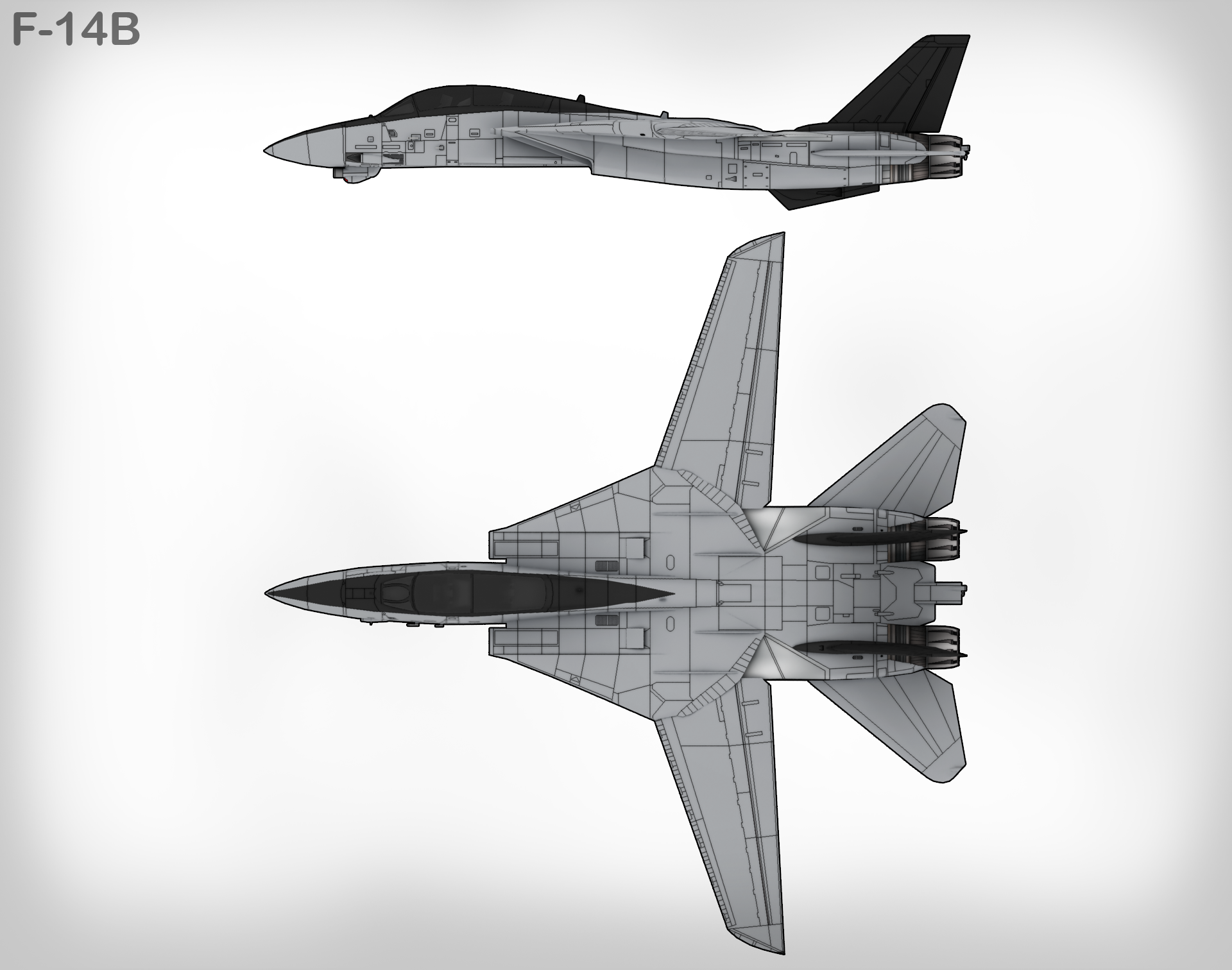 Live most mass produced F-14, the overall aesthetic are exactly the same, which the only exception being the censors under the nose.

The F-14D, the final mass produced variant, the improvement is mostly only avionic and a glass cockpit, so everything else stays the same. 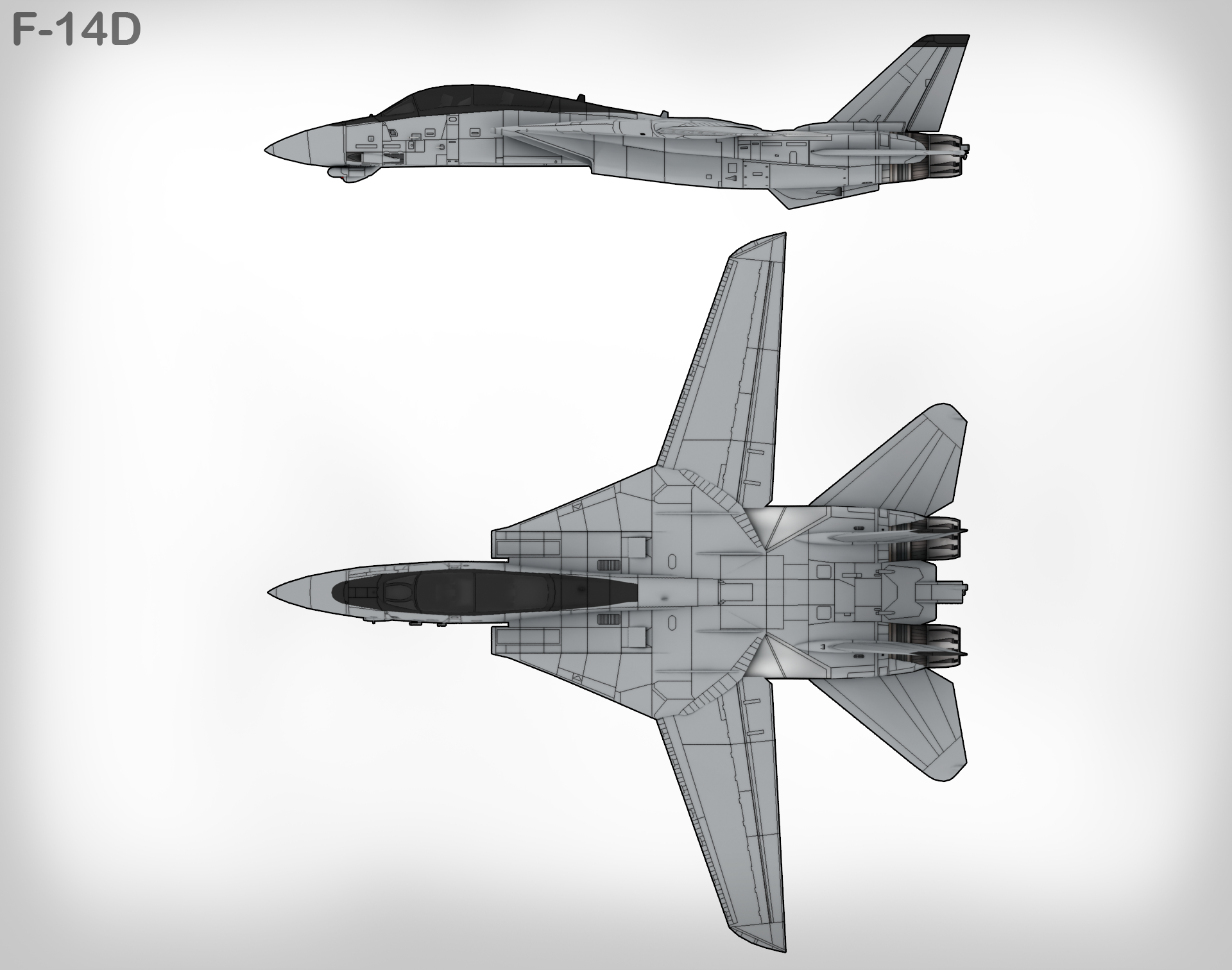 The Best way to distinguish the F-14 from the earlier models, is that the F-14 has two sensors are side by side under the nose. 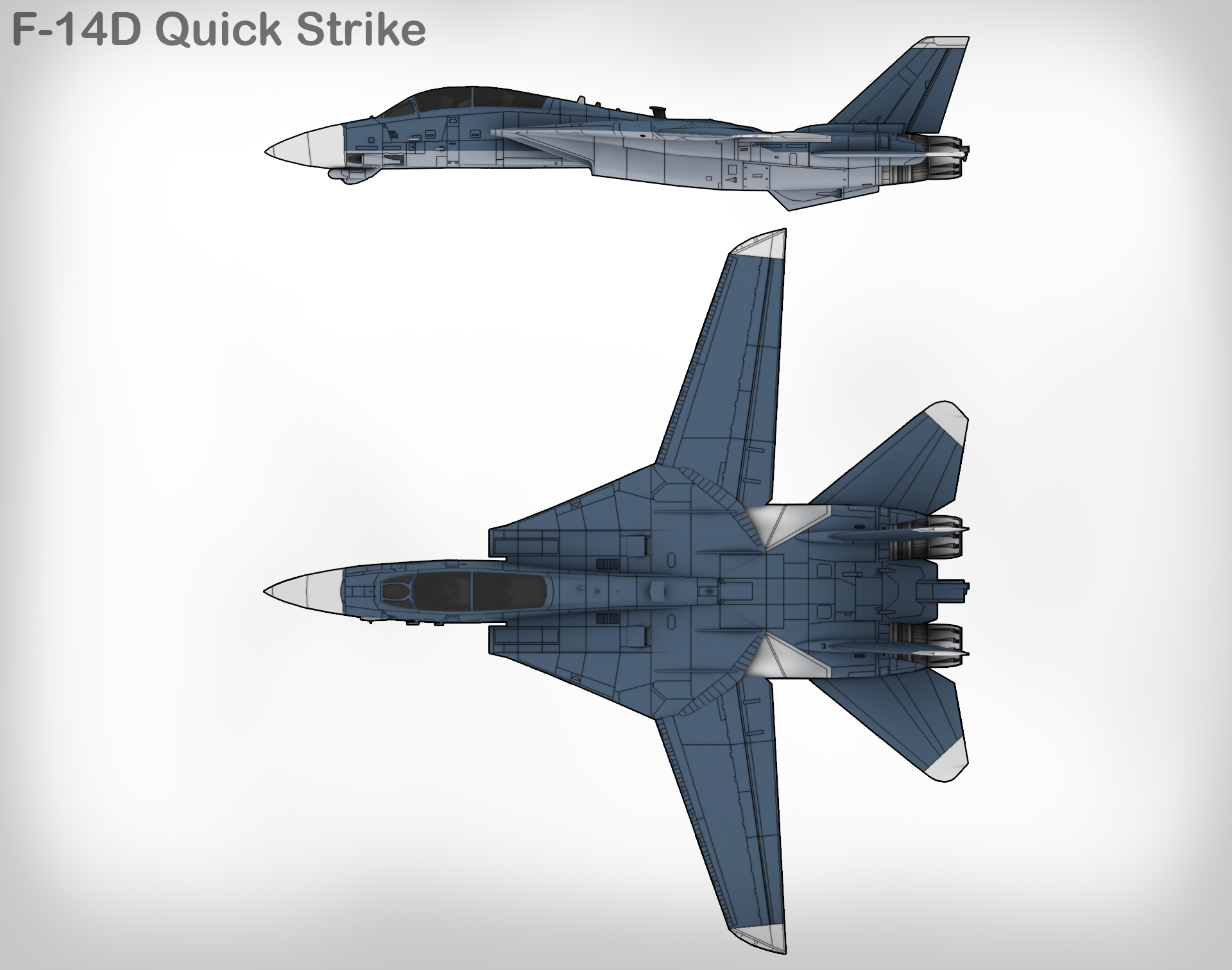 This new version is mostly an avionics upgrade, so there isn’t much difference compared to the F-14 besides the ability to carry a more variety of weapons.

The ST21 stands for Super Tomcat for the 21st Century, it is upgrade over the Quickstrike which features a new glove area, the glove was enlarged to take the place of the extended glove-vane of the F-14A model. 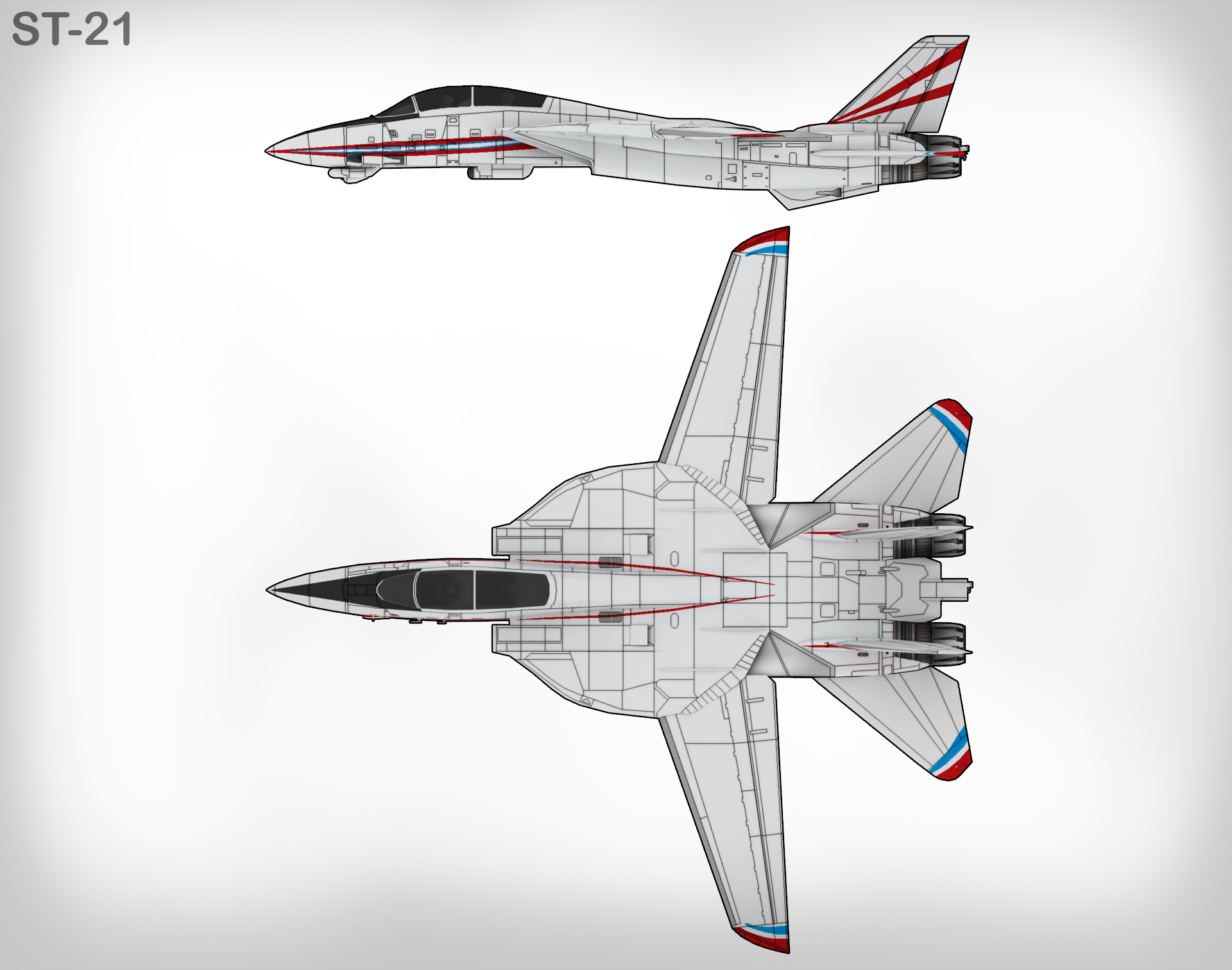 Another noticeable modification is the single piece windscreen. This would have given the pilot a much better frontsight compared to the older Tomcats.

The AST-21, one of the final branches in the F-14, this variant has been adapted to excel it attack capabilities. 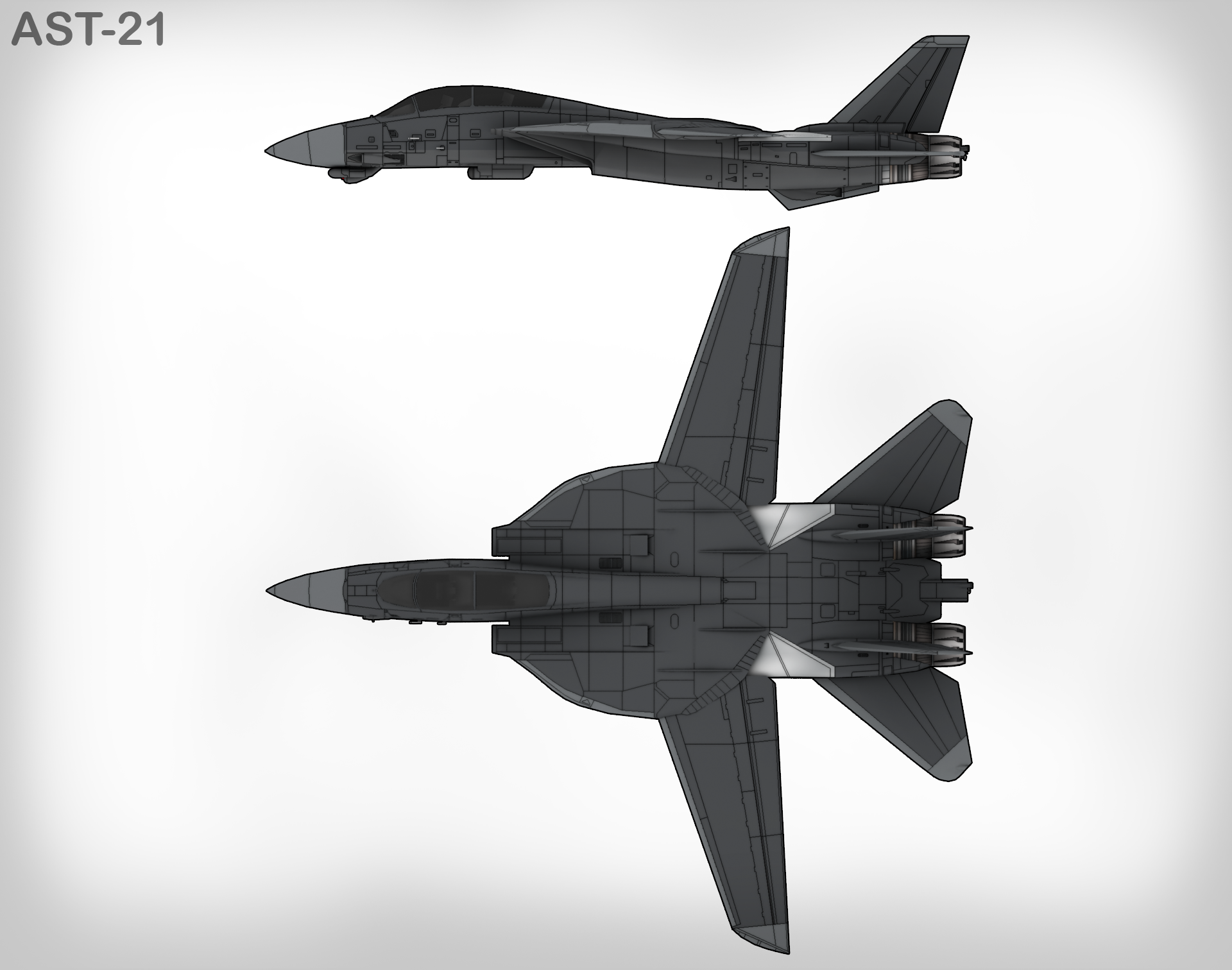 For what I gathered, there is no external change in the aircraft, so it will always be hard to distinguish this and the ST-21

And that is all the F-14 that have been added, does is this mean that this family has been completed?
Absolutely not.

There are a lot more variants to be added, but most of them will be fictional, as this is a very popular aircraft, there are quite few interpretations how more advanced variants should look.
I’ll try to address some of those interpretations in a way I see fit and then, to completely close the family, I’ll add one last unit, probably the one you will most likely look forward to, the STF-21.
There is very little information about this unit, so it will be an interesting challenge to build this last variant.

I’ll also start to post here the change list.
This information is more useful for anyone that is already able to play, but in the next reports I’ll explain everything in detail.

Well to at least add something new to this report, I’ll talk about the upcoming update.

The main improvement will be the completed campaign editor, the version you have at the moment is limited in some functionalities, like setting the skins which a playable aircraft can use. And lacked a unlock system were you were give access to buy new aircrafts after you clear the mission or campaign.

This is related to the idea that I’ll be focusing the modding capabilities in the next updates to have everything ready for when I add the steam workshop support.

As it was mentioned before, this next update will also introduce new families, like the F-4 and MiG-23, I will continue to add new aircraft families in the following updates until all of the initially planned aircraft are in, it will be only after that I’ll focus in adding the variants to compete the family structure.

This reminds me, I need to post a report stating what is planned for early access. It will list the essential features and content to go to beta and full version. Although you can be sure that I’ll add more than that (to satisfy my own desires and to address content/feature requests), but that is not the end, I can always add more stuff after release without having to resort to DLC. I just don’t want to stay to long in early access.

Delays are bound to happened, but my goal at the moment is to have it feature complete six months after it was released in early access.

As for ETA of the next update, there is quite a few steps missing in order to be completed, in addition to that I’ll need to take a least a full day to test everything since I made a few changes that may affect the gameplay code.

And that is it for now.

Maybe one more last question, the F-5A is leaving texturing phase, in your option is better for the update to wait for it, or to release as soon as possible?

AIM-54C needs to be added. Especially since all AIM-54As were phased out or converted to C models by the time the F-14B was introduced to service.

Also the fins on the Phoenix model itself are too big.

the next update will include the other AIM-54s and farkur 90.

Ah, good. Will the oversized fins be fixed?

Does the F-14 here have variable wing geometry based on speed like its real life counter-part? Or is it fixed wing in this game?

I'm pretty sure it is. Just try checking around the videos/screenshots around the Steam page.

There's an animation in the models called AnVelSt2 which is for the wing-sweep movement at a certain speed.

I say release the F-5A as soon as possible, in its own separate update.

TS said he'll put it in the next update when he can.

Looking back, there was the G-303F posted in Facebook. Since we have the G-303E now, will we not be seeing the 'F' or might it still be added in the future?

STF-21 is the last and most ambitious upgrade planed for the F-14, it has a completely new shape, because of that I´m saving it for last.

As for the G-303F, I´m a bit confused about that model. In some references the G-303F is a completely different shape, while in others it is stated that the model I reveled is in fact the true G-303F. I probably rename it to YF-14F because with the exception of the wings is identical to the YF-14 and then I´ll add the other G-303F later.

I remember the same being said about the ASF-14. I question the name since searching for STF-21 doesn't have results for any type of aircraft with that name.

What about the fictional AEW F-14 you've talked about eons ago?

A dream comes true im a huge fan of the F-14 and this is just heaven for me.

I'm sort of disappointed there's no trim vanes, but what really gets me is the locked open F110s on the later models.

The STF-21 does sound like the AST-14, which I've seen it said somewhere it was separate from the AST-21 with, of all things, a reduced radar cross section - so basically a new, stealth, Tomcat.

The roll animations are also messed up. When the wings are swept the spoilers on the wings are disabled and the stabilators are used for all roll control. It's backwards right now.

If anyone is curious, I've confirmed that the F-14 does indeed have swept wings at high speeds. Of which I'm happy about. Whats the point of an F-14 if the wings don't move?