Redone Engines:
Now engines produce torque if their thrust direction is not aligned with center of mass. This means that if a ship COM is too far from the center of thrust or an engine is destroyed it will have a tendency to rotate when the main thrusters are engaged. If the gyroscopes mounted on the ship are strong enough they can overcome this effect at the cost of using electrical power.

But this also mean that main engines can be used to rotate ship if necessary by activating RCS mode
(key 'r'). 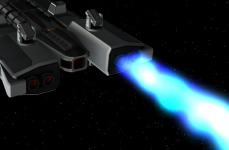 NTR (nuclear thermal rocket) now requires to be fueled also with Uranium-235 in addition to LH2. The uranium reserve is slowly depleted when the engine is used.
Some variants of NTR have a boost mode where LOX is used to greatly increase the power at the cost of fuel efficiency (key 'o').
Different engines types can have differents color, e.g. fusion engines have now a blue tint. 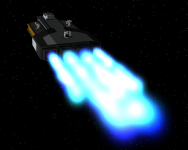 HE ammo:
The damage of explosive ammo versus ship components has been hugely increased and they can be distinguished from other ammo types by their red color. 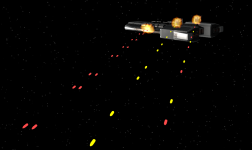 New Ship: Charger
A new ship has been added, it is bigger than a ship of class Speeder. 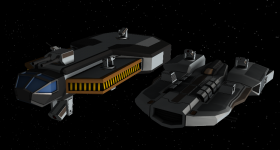 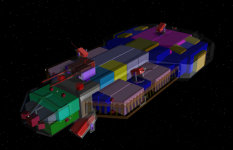