Release Gamma is upon us! This will be our final release for the old version of Homeworld 2 now that the glorious remaster is on its way!

G'day all and sundry! It has been a long time since we have done anything public, we've been quite happy to just toil away in obscurity, however with the Homeworld Remastered Collection coming out we felt that we needed to give a final hurrah to the wonderful original game which started it all! 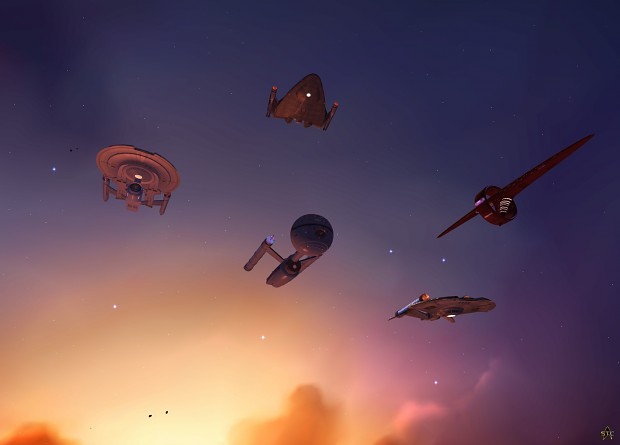 There is no part of the mod which has been untouched between our last release and this one, there is improved explosions, balancing, graphics, sound effects, music, scripts and there is so much all new content that it would be impossible to list it all here!

We have realised our plans of having a game which includes ships from all four Star Trek eras, TNG (The Next Generation/Deep Space Nine/Voyager), TMP (The Motion Picture), TOS (The Original Series) and ENT (Enterprise). Adding ships alone has been the bulk of the work going on, with one or two ships being added to the mod every week for almost a full year!

This has had a telling effect on the physical size of the mod as well, the main mod file now contains 9017 files in 1742 folders and weighs in at 3.08 GB. This has compressed down to about 1 GB and the installer itself has managed to gain over 400 MB after all this compression. 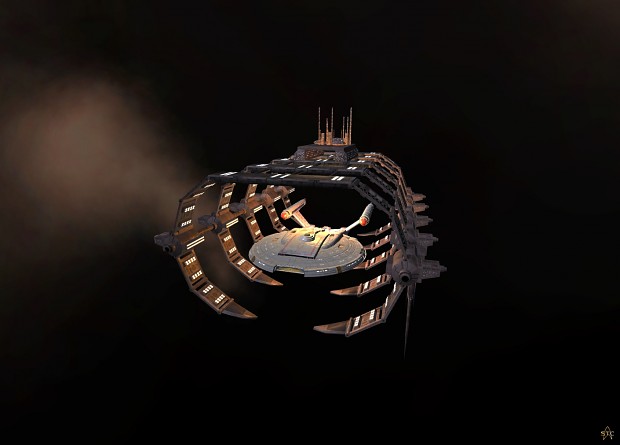 While TNG, TMP and TOS were straightforward in regards to the expectation of the community the ENT era presented some interesting decisions to make. There was a whole idea of what came before TOS in the years before Enterprise first aired and many of these old ideas were either ignored or shot down during production. We have attempted to reconcile these two schools of thought. Here are the most contentious points... 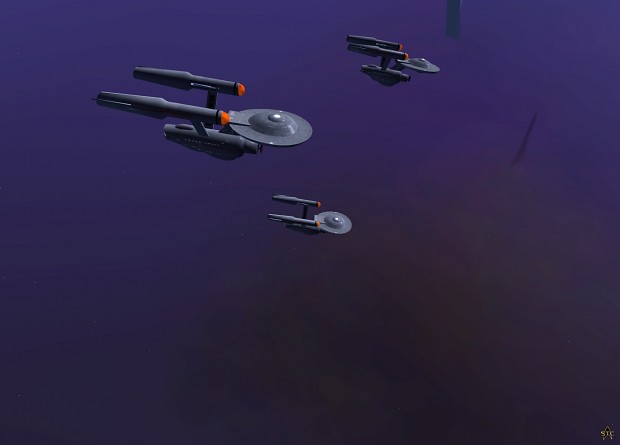 As the design for the Daedalus had a spherical head it was assumed by the ships from the pre-TOS era would all have a similar design type. If you look on Ex Astris then you'll see many designs of non-canon ships which follow this theory. We have taken the approach that the Daedalus and the Bonaventure from TAS (pictured) were the first true UFP ships, being the results of cooperative ship design and construction from the founding members, Vulcan, Tellar Prime and Andor. Accordingly the two UFP ship are at the end of the ENT era tech tree and the Earth ships are not technically Federation ships at all. The proposed NX refit is also only available after the UFP research is completed. 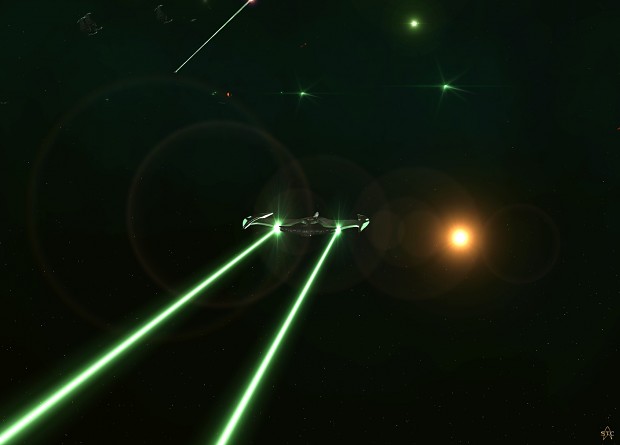 The other biggest point of contention in Enterprise is the Romulans, they were commonly depicted as being without warp drive due to a single comment by Scotty in "Balance of Terror" in TOS, he said however that they were operating under "simple impulse power only" so this can be interpreted as the powerplant used for their engines as well, instead of saying they only had sublight engines.
The Bird of Prey in TOS plainly had warp nacelles and there was even unused backstory which had the ship be the result of stolen plans of the Constitution class. We have decided to grant the Romulans warp drive in all eras to reflect this and for gameplay reasons.

Before Enterprise the Romulan pre-TOS ships were all imagined to be like the model that Greg Jein did for the Star Trek Chronology, tubular with primitive looking warp engines. Enterprise however rocked that boat with the introduction of the T'Varo class bird of prey (Pictured). This ship looked like it belonged alongside the Norexan class TNG era warbird, not in the ENT era, so we have used it there and had a fantastic model of Gred Jein's design (we're calling it T'Rehu class) created for ENT.

We choose to explain the T'Varo's presence in Enterprise as due to the temporal cold war, but as that was stopped the movement of knowledge and technology (and ships!) across eras was made as if it never was, the Romulans never got their post-modern birds of prey and this really cool design still gets to go in the mod! 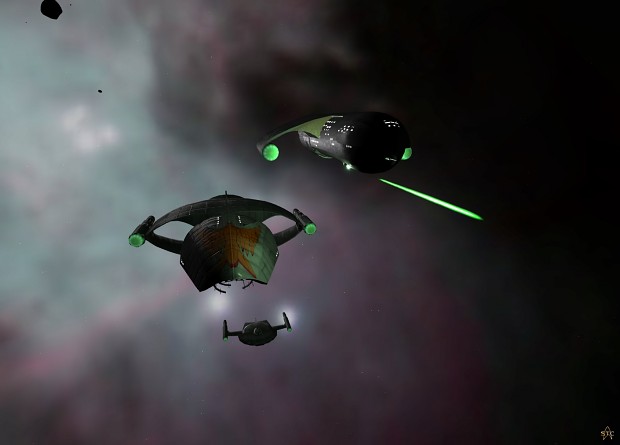 As we have not had the personnel or resources to create all of the models and textures that were needed for the mod we have had to search the Internet far and wide for materials to use. We have been lucky to have been given permission by so many people to showcase their work in the mod, there are literally hundreds of contributors to this mod and I would like to thank each and every one of you!

There are three special mentions that I want to make though, first is the Star Trek Webcomic which is the source of the design for the Romulan ENT era dreadnought you see pictured above. Their "No good deed" comic inspired me to push for the original idea of the pre-TOS Romulans to be pursued! 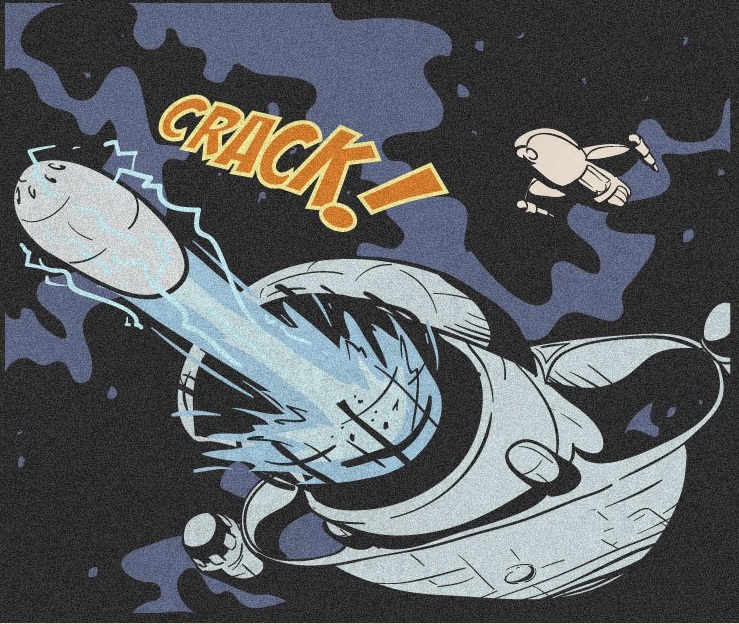 The next special mention is a whole other modding community, the MSFC is responsible for or have been very helpful with many of the textures on the TOS and ENT era Romulans 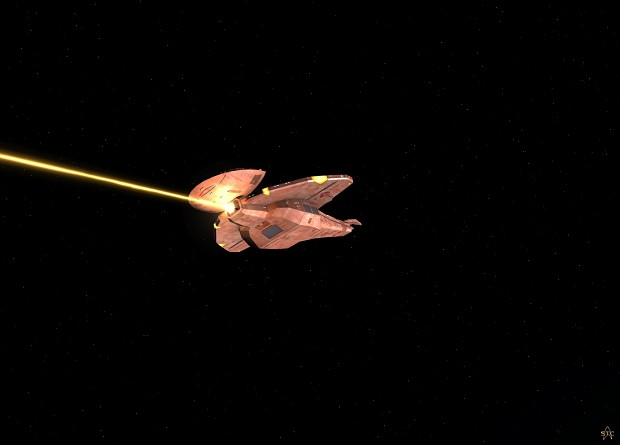 Our final special mention is for our team members! HerbyGuitar and Stargazer have been with Continuum from the beginning and you can see their work everywhere you go in the mod. The scripts that make Continuum special wouldn't exist without Stargazer and Herby's fantastic models are above par at every point!

Dark_Sentinel, a new member, came to our rescue with the model of the ENT era Romulan warbird and dreadnought and the best Cardassian ships I've ever seen, as well as helping with the icons at the 11th hour.

SR71 is the talent behind the Federation TMP era fighters, recreating them from screenshots from the old PS2 game Star Trek: Shattered Universe

Brandenator has been my right hand man for the past year though, learning the ins and outs of the mod and generally being extremely helpful, he is the man behind the transfer of most of the new ships into the mod!

So where to from here? Well to the remastered version of Homeworld 2 of course! If you have been keeping up with the news then you'll have seen how mind bogglingly beautiful the new game is and (with Gearbox's help) we intend to move across to the new platform as soon as possible!

One of the biggest things on our wishlist is to be able to restrict a race if you're not in the right era, this will allow us to do a Cardassian race, a Dominion race, a Borg race, a Gorn race... the list goes on!

The image below is a link, you should really follow that page now too ;)

We sincerely hope that you enjoy this last version of Continuum on the old version of Homeworld 2!

So you did what STO did regarding the T'Varo, completely ignored it existed in the Ent ERA and just have the TOS BOP as a Starter Ship.

As it said in the article:
"We choose to explain the T'Varo's presence in Enterprise as due to the temporal cold war, but as that was stopped the movement of knowledge and technology (and ships!) across eras was made as if it never was, the Romulans never got their post-modern birds of prey and this really cool design still gets to go in the mod!"

Amazing trailer. Was hoping for a bit more Cardassian showcase, but its great nontheless.

also :D i might get my good ol hw2 out again and play this xP