The game has been released on the Android and iOS platforms!

Hey guys, I want to invite you to check out my new game, Run Goldy Run! It's basically a 2d sidescroller based on dodging a neverending onslaught of enemies, with the twist of being able to run on the top or the bottom of the floor. It sounds confusing, but it's completely intuitive once you get into it. There's two basic controls, FLIP and SHOOT, blending the simplicity of games like Flappy Bird with the insane difficulty of...also Flappy Bird. It tells the simple story of a sheep with golden fleece who was born to run, and the eternal swarm of enemies who will stop at nothing to claim his precious pelt. Anyway, it's my first major game release and I'd really like to invite all of you to check it out on the AppStore, GooglePlay, or my website, Goldythesheep.com. 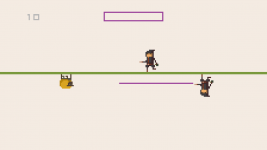 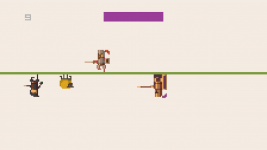 Given that it's my first real project and I have little to no experiencing designing games, I'm not anticipating to make a huge wad of cash off of it. However, 10% of whatever I do make off of content ads will be donated to charity, specifically Children's Hospotal in Dallas. I'm a guy who likes to play games, and I made a game that I hope you will enjoy playing, but if that doesn't grab you, you can also help the disadvantaged. That's right, you can play an awesome game, support a budding indie studio, and help the poor, all at the same time!
So again, try it out, let me know what you think, and if you enjoy, please share. Have a good run!

The iOS has a small bug: when you are logged out of game center the game wont start. Update should be coming through soon to fix this however.