The time is finally here. Version 2.0 is here for your enjoyment! With a MASSIVE list of changes this will probably satisfy all of you! Refer to the content section for more info regarding this massive update! 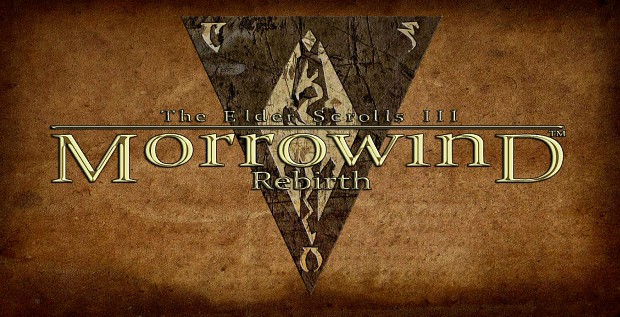 Hi again, or welcome to you who's new to Morrowind Rebirth! I know that a lot of you guys out there have been waiting long and patiently for this update, but the wait is finally over! With this new update you'll finally get to experience the "real" Morrowind Rebirth. Previous versions should be considered "betas". So what can you expect from Morrowind Rebirth 2.0? Well a lot really, I've not only fixed old issues and bugs, but there's also a massive changelog for other stuff as well. Lets check it out! 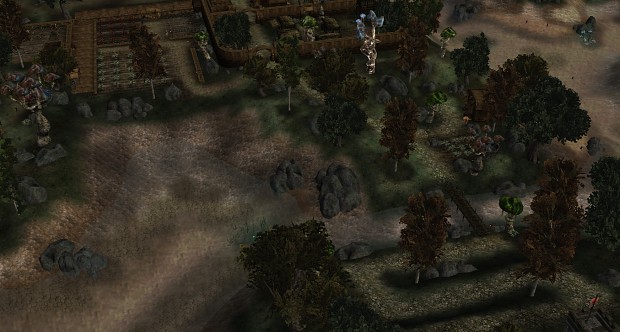 * Nerfed prices for medium and heavy armors. Light armors will be included in the next update along with new weapon prices to match the new prices.
* Brown Bears, Guars and Grey Wolves will no longer attack the player on sight, although they might attack if you get to close to them.
* Reworked the entire area around Pelagiad. Now with a small forest, hills surrounding the Fort and a graveyard.
* All types of guards will now take use of standard health potions while in battle, don't mock the guards!
* You can now buy "portable" camp fires through various traders around the Island.
* Some changes to the area in and around the Red Mountain. Its a work in progress.
* Rebalanced all Arrows/Bolts, Spears/Halberds and Daggers with proper damage/weight/speed/cost. You'll see more of this in the next update.
- Steel weapons should for example be more durable and a bit lighter than iron, but in the vanilla game they aint.
- Realistic weapon damage, chop/slash/thrust. A spear should for example cause a lot more damage when used doing a thrust attack, than a chop attack.
- Realistic weapon speeds. Weapon speed will be based upon the weight of the object. A steel dagger should always be faster than a iron dagger etc.
* New unique encounters like bandits, unique creatures and other cool stuff. 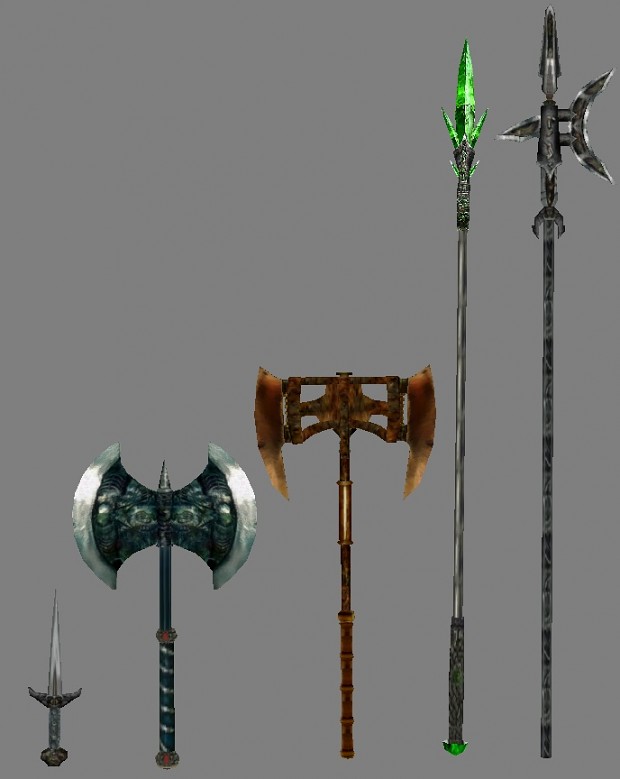 Get lost within the depths of Balmora's Underworld. Take a walk through the sewers: let the Thousand Lanterns Market take your breath away or why not explore the abandoned canals? Witness criminal factions fighting against each other and common folks going on about their daily lives. Discover the way to access the massive cave system that lies deep below Balmora. If you're lucky enough, you may live to witness Bthumynal, the legendary lost Dwemer ruin and its secrets within. An epic adventure awaits you Outlander. 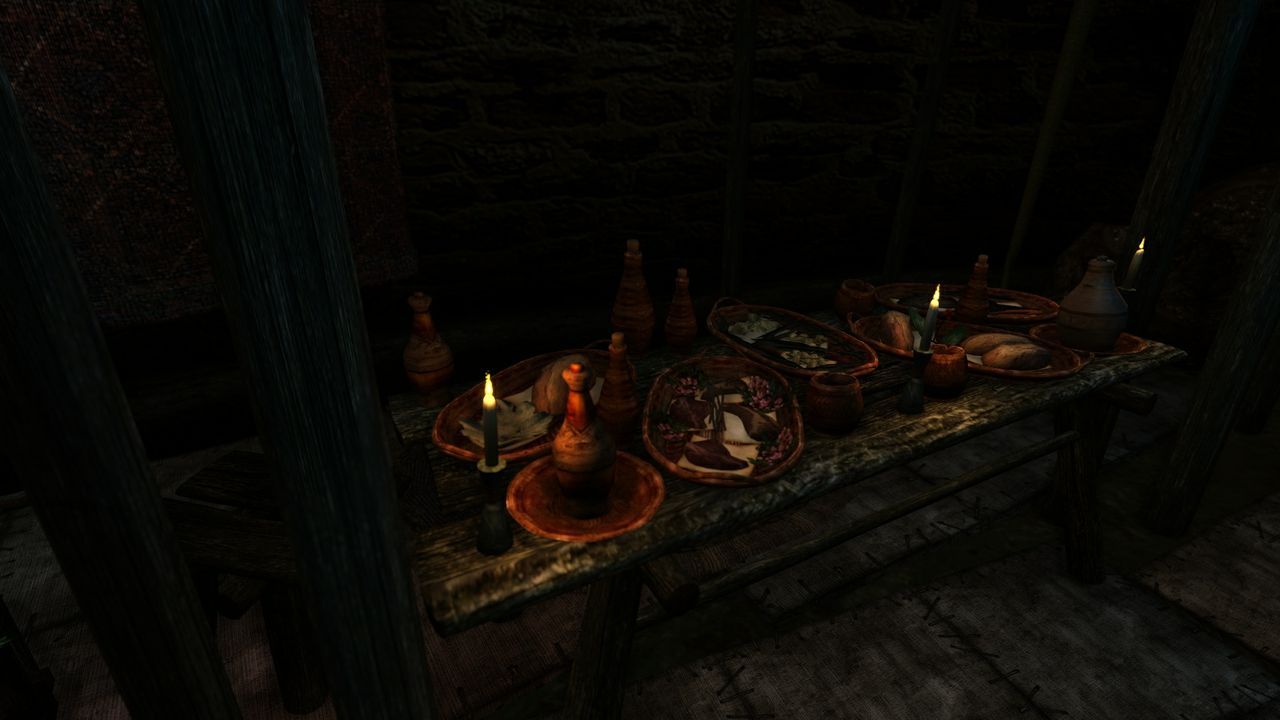 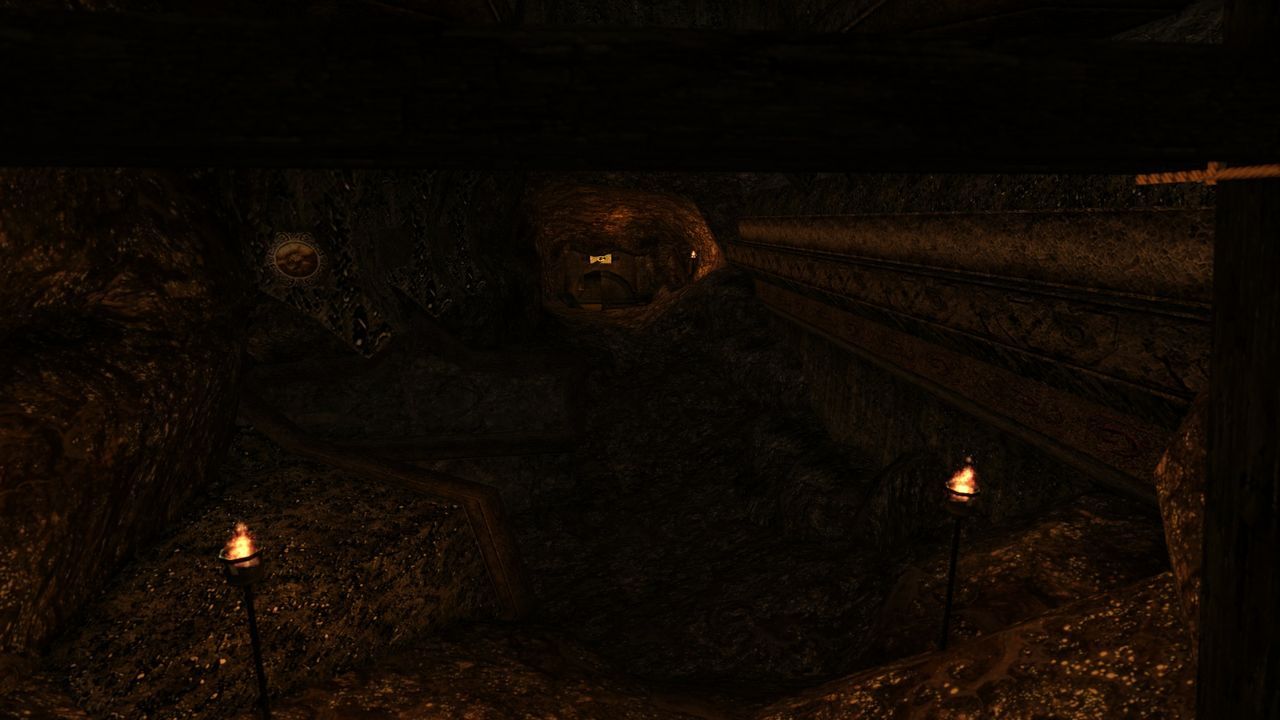 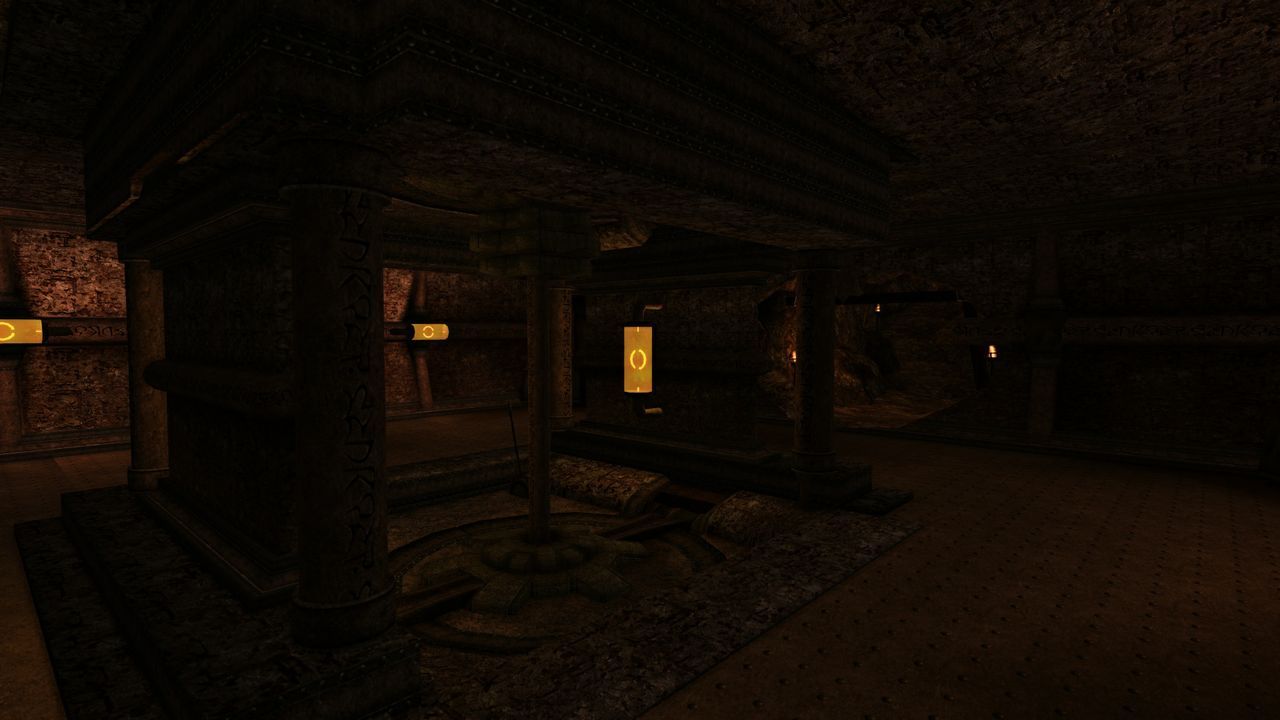 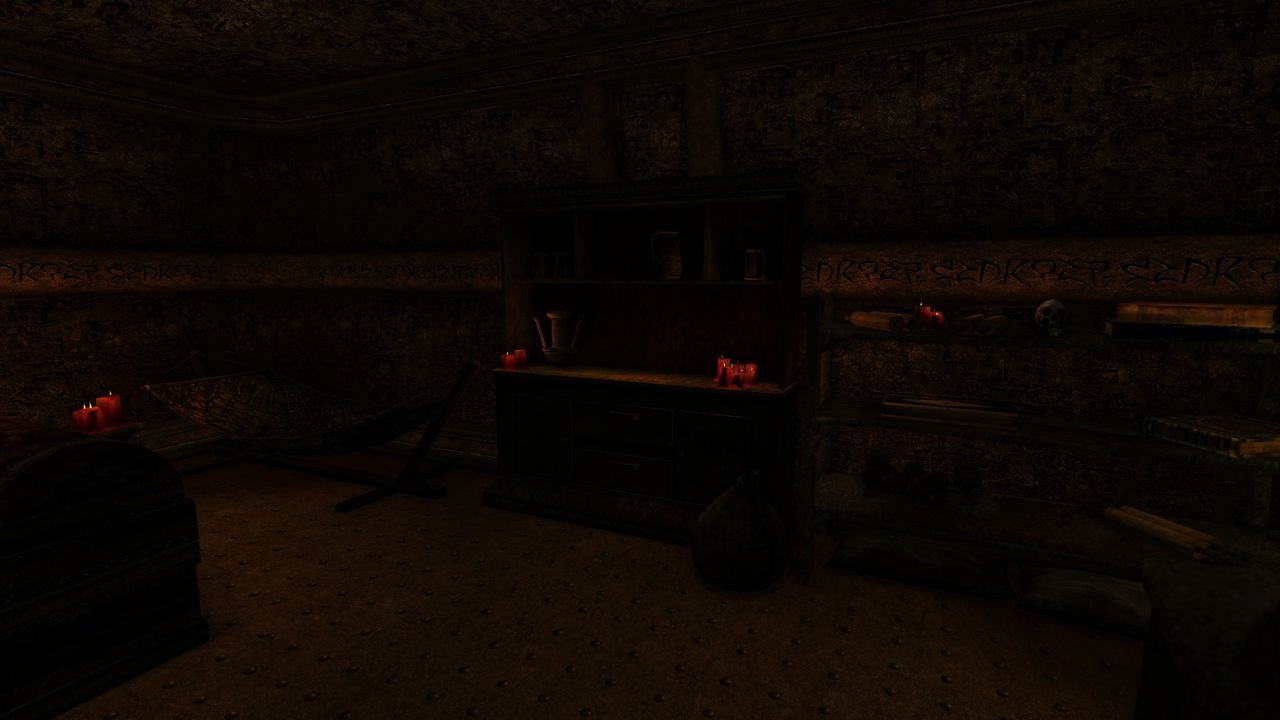 Travel through a Daedra Gate and face the ultimate challange in the Daedra Realm!

I'm aware that this area is rather small and that the skybox doesn't keep a very high quality. Remember that this is still a work in progress. There's a new skybox in the making and I plan to expand the area in the future. Stay tuned!

A new plugin that changes races starting abilitys and powers. Removed changes to races in the main plugin.

* Removed some stuff from Dren Plantation due to lag issues. Could still slowdowns on older computers.
* Removed the Thief Guild Armor from Bacola Closcius, Balmora Cornerclub, due to his trade as a Innkeeper.
* Removed a flaoting web-static that were floating in the air just outside Seyda Neen.
* Removed several objects (added by this mod) that were really questionable, at least lorewise.
* Removed a lantern at Caldera's north gate that were clipping with the ceiling.
* Fixed wrong stats/height/spells/abilitys on all new creatures.
* Fixed a massive amount of floating fungai around the Bitter Coast.
* Fixed bad lightning in the Alchemist shop, Pelagiad.
* Fixed a missplaced plant in Balmora, clipping through a catwalk.
* Fixed a missplaced wall in Balmora, clipping through a house.
* Fixed a shack door in Dren Plantation that teleported you to the wrong place.
* Fixed a few pathgrid issues.
* Adjusted a boat in Seyda Neen that were positioned to low, thus causing the water to clip through its hull.
* Adjusted some weapons that had too short reach compared to thier length.
* Improved/added vertex shading in a lot of areas, mainly in the Ascadian Isles.

* Changed the name of "silver_staff_dawn_uniq". This staff's real name is Staff of the Silver Dawn, though it appears as Silver Staff in the game, corrected.
* Changed the name of "silver spear_uvenim". This staff's real name is Uvenim's Silver Spear, though it appears as Silver SPear in the game, corrected.
* In 'The Plan To Defeat Dagoth Ur' (bk_vivecs_plan), the line that reads "A mortal Kagrenac may then be destroyed by mundane means"
should read Dagoth Ur instead of Kagrenac. Thanks to Lendrik for noticing this issue.
* A door in the Balmora Council Club were replaced by "in_hlaalu_door" instead of "rent_balmora_council_door".
* Fixed a massive load of landscape seams and made changes where some textures might look odd or out of place.
* Ten-Tongues Weerhat (Mournhold) will no longer sell "exquisite_shirt_01_rasha", which were a quest item.
* You will now be able to talk to the Ash Vampires (as intended by Beth) before you face them in battle.
* Her Hand's Shield had diffrent AR value than the rest of the set, corrected.
* Royal Guard boots and greaves had diffrent AR value than the rest of the set, corrected.
* Dwemer Coherer is no longer sold at Mebestiana Encke's shop.
* "Brallion's Exquisite Ring" value 40 > 240 to match the rest of the exquisite rings.
* Corrected and balanced several weapon enchantments. 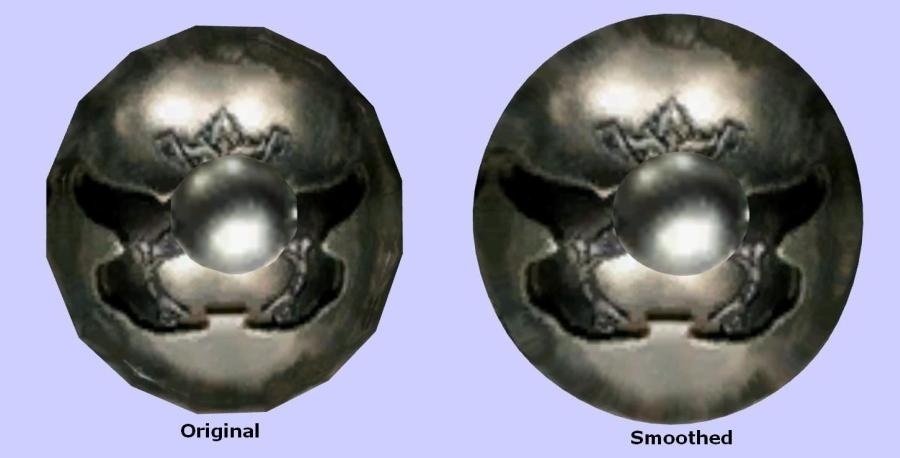 Some of you may remember that replaced unique weapons with new models and textures in v 1.4. Now I've begun replacing most of the stuff that I didn't do previously. I've chosen these with care so they'll fit nicely along with the rest of the game. I will replace the remaining uniques' when I find appropriate meshes. 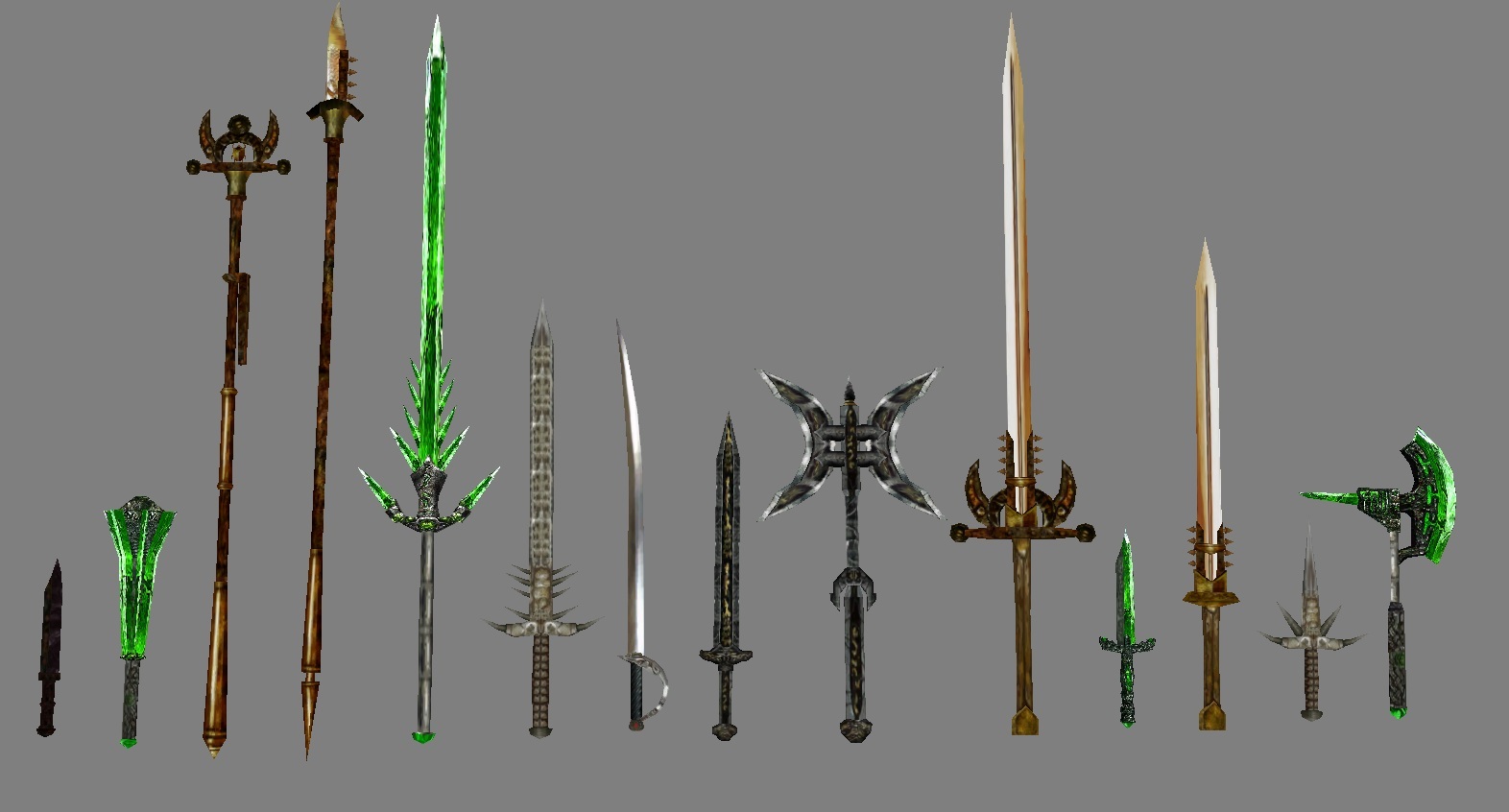 
Weapons (new meshes and icons). Thanks to Saint_Jiub for the meshes and papill6n for the icons and fixed UV-maps + other fixes.

Please be check the "changelog" included in teh download package for all spell changes. There's much more but I can't fit it all in, it would make the post too long..

An ongoing project to make life easier for spellcasters. Also fixes a number of issues. 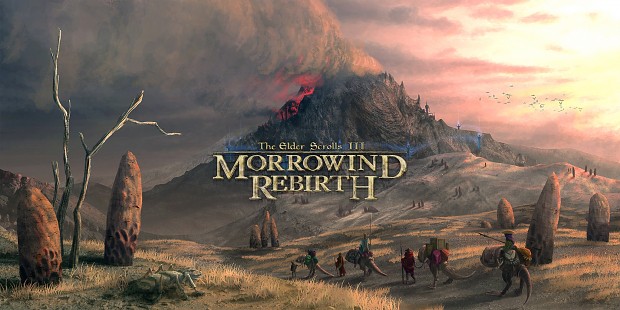 This is NOT the final version. There's a LOT more coming! I plan to do montly updates from now on!

Enjoy and please let me know if there's anything that needs fixing!

This just keeps getting more and more epic.

Its just not a wallpaper, its the new main menu!

Here's the link to the guy who made it: Lelek1980.deviantart.com

You can find a bigger version on that site.

Finally getting around to buying morrowind (Thank you steam sales)after loosing my CD, cant wait to play this :D

"All blighted creatures now have unique textures."
THANK YOU

Could it be possible to change the effects of greater bonewalkers from a damage attribute to drain attribute. I forget if its strength or endurance but it is annoying.

* Dwemer Coherer is no longer sold at Mebestiana Encke's shop.

This makes sense, but coherer is not even in the small chest upstairs(where should be to steal). Is it right or did i miss something?