The winds have changed. The Foehn Revolt begins. The 4th side - with its three subfactions: Haihead, Wings of Coronia and the Last Bastion - is finally here to join the war in the free unofficial Command & Conquer: Red Alert 2 Yuri's Revenge expansion pack, Mental Omega, version 3.3.

The time has come once again, the new version of Mental Omega is finally here. Furthering the Red Alert 2 legacy, Mental Omega builds on what was established by Westwood Studios and expands upon the conflict between the Allies, Soviets, and Yuri's Epsilon, while introducing a completely new faction to the play - the Foehn Revolt - complete with its own 3 subfaction, structures, units, support powers and heroes.

Enhanced with the powerful Ares DLL, a project headed by AlexB to push Yuri's Revenge engine to its limits, Mental Omega 3.3 strives to bring new features to the game while maintaining a strong sense of gameplay balance. Mental Omega 3.3 continues where the first Red Alert left off and branches out into an expanded universe with brand new missions for all factions, with missions for the Foehn Revolt planned for the future.

Mental Omega 3.3 requires files from a working installation of Red Alert 2 & Yuri's Revenge patched to 1.001 to be played. Follow the instructions presented here to get the mod to work properly with your game.

Watch footage of a Foehn Revolt subfaction skirmish gameplay to quickly get introduced to the new side: 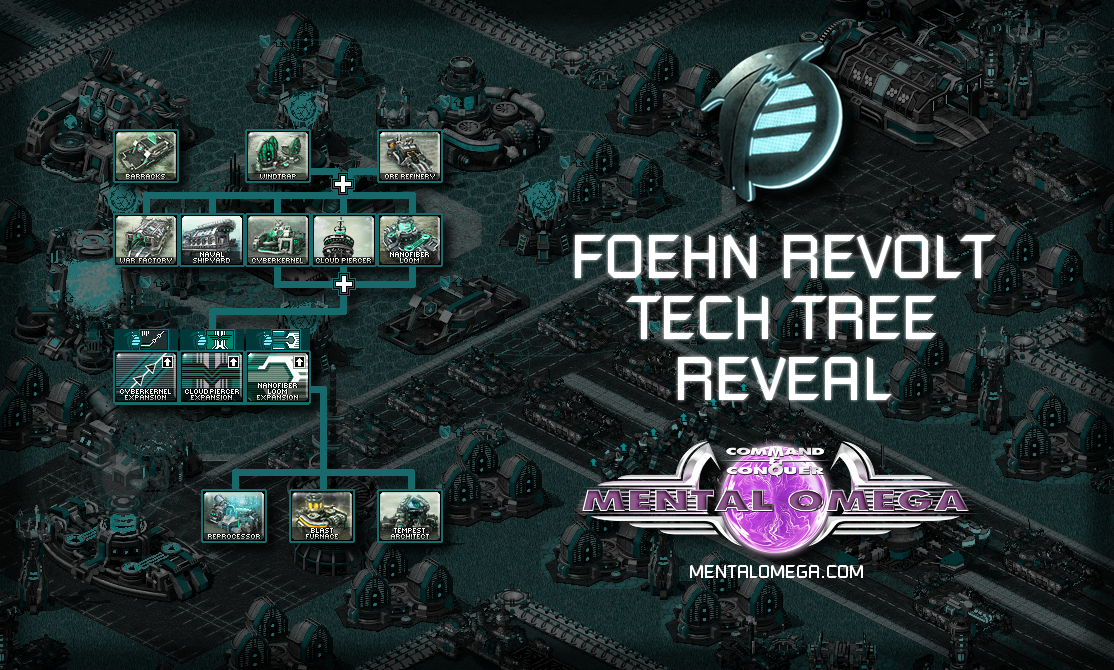 You can also listen to one of 20 tracks composed by World Beyond as a part of the Foehn Soundtrack here:

World Beyond - Right on Track (Mindshell)

Stay tuned for more updates! The ride is not over!

Hey, is it just me, or campaign doesn't work? I searched all the forums and it seems no one else got this problem. The skirmish and multiplayer works fine, but when I try to play campaign it loads the mission, but crashes immediately afterwards.

Did you try to load up the first mission and the game crashed?

Did you try other missions?

1. It crashes on all missions and all difficulties.
2. I see the loading screen and the first act movie just fine. It actually loads till the end and then crashes with a fatal error.

If it's just the missions crashing then it's a crash that we will try to fix and patch in 3.3.1.

Loving the mod so far but quick question.

When i reinstalled TFD to play the mod i also threw in the unofficial TFD patch that fixes a lot of things normally and makes it so you can play without the CDs and has one or two other fixes.

I'm not getting crashes or anything but i seem like im getting performance issues in 3.3 when compared to 3.0. Is it known if the unofficial TFD patch effects anything with the mod's performance? Should i uninstall TFD and then reinstall everything?

Thanks for making a great mod and making my sick days better.Was looking forward to this mod all year and i am loving loving playing my way through the updated Russian campaign and can't wait to play the other 2 as well.

I've been told it has modifications made to the exe so I'd advise not using the unofficial TFD patch.

I'm using a TFD 1.03 EXE and I got it to work for the most part. Have you played around with your settings?

i did but i reinstalled anyway but now im getting another error when trying to play it borderless windowed mode.

Looked through the forums and didn't find anything else about it, any suggestions?

Edit: played around with client settings as well as .exe properties, got something that works anyway.

Hi how did you get to work because i am having same problem, thanks

You don't really need the unofficial patch with Mental Omega anyways, I mean, it has it's own balance fixes and it alters the game engine in a way a regular patch can't.

The TFD 1.03 unofficial patch was in general intended to fix bugs, compatibility and performance of each game contained in the pack. Many of those fixes are superseded and some don't do the trick on Win7+, though.

The changes for RA2/YR are removal of the need for the DVD, UDP LAN fix, 64-bit EXE for YR, and Terrain Expansion.

Thanks for this great mod.

Is there anyway that i can use the old launcher (the previous m.o 3.0 style that used the original ra2/yr menu/interface)

There is no way to use the old launcher.

or gamemo.exe that can be launched using cmd injecting ares

I wish you can increase the gameplay speed for the missions, it is rather quite slow imo.

Couldn't there be a way to apply the -SPEEDCONTROL parameter, though?

I noticed a bug where when deploying Megaarena Tower, some Megalodon units stuck and "dancing" at the spot. They cannot move or attack but once Megaarena tower was destroyed or sold off, they went back to normal.

Also, when I sent engineers to capture enemy barracks or war factory of different main faction, I'm unable to build their units (there's no new construction option). Only when I capture their Construction Yard and build barracks/war factory I able to construct their units.

I launched the game and find that a lot of strings are like "MISSING:XXXX". How to solve it?

Are you using a non-english version of the game?

the jackal racer doesn't have any shadow when I play is that intended?

Yeah, because its body is a turret and turrets can't cast shadows. We don't have any solution to that yet.

how does the special gimmick of Haihead's Cyclops Walker work exactly? The description on the website is a tad unclear.

If its target is at 0.5 of its maximum range, it will get a firepower boost.

They revolt against those who dry their hair with simple towels.

how do you get it to work on origin version of cnc?

I came. I saw. I Commanded & Conquered

So Im just going to uninstall the old MO...

This mod is very unique.

I appreciate it. ;I

I can't wait for Final Omega APYR to be released.

I can't wait to make new map prototypes for this mod.

Can someone help me with this crash issue

"This image format is not supported"

THe previous version works fine. I only get this crash after installing 3.3.1 patch

I got it too for some reason

Try this for now: Forums.revora.net