All the current changes to the Scrin in release 3. 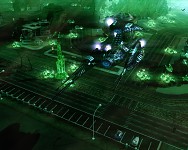