This week we talk about the tests we will be doing this weekend in Okhlos!

Even though we are currently making lots of progress with the game, adding content as if there was no tomorrow, there are still a few key issues we need to address. One of them is controls. And digging a bit deeper, we can also divide the issue into two problems we have to deal with: Teaching players how you should handle the leader and mob’s movement, and finding an alternative control method.

Our idea is that the game should play kind of like a twin stick shooter. You control the leader with one stick and the mob the other. However, this is not so easy to convey to new players. It takes some time to get the hang of it, some players even play for quite long without nailing it. We tried different ways to transmit this to the players, through tutorials and the like, but now we are going to test if we can solve this by changing the control scheme a little bit.

The second issue is that, until now, the only way to properly play the game is with a controller. You can play it using the keyboard (that is what we do most of the time while testing it) but it is not the most comfortable thing in the world. You may end up having to press five or six keys at a time. Our plan is then to give players more options, but we don’t even know if it is possible to have the same experience as using the controller with the keyboard (or another device). To find out if it is, we are going to carry out a series playtesting sessions with different control schemes.

So far, I’ve mentioned these control schemes a few times, but what exactly are them, you may wonder. Well, here they are:

Nowadays, you control the mob with the controller’s right stick. If you move the stick, the mob will move in that direction and destroy anything nearby. If you release the stick, the mob returns to its original position, around the leader. With this control scheme we change that. If you move the mob to the right and then release the stick, the mob will move to the right and remain there until you move it elsewhere. Granted, this may not be so much a different control scheme as a change in the mechanics but we have the hypothesis that this may affect the way people use the controller, making it easier to master. We will see if that is the case. 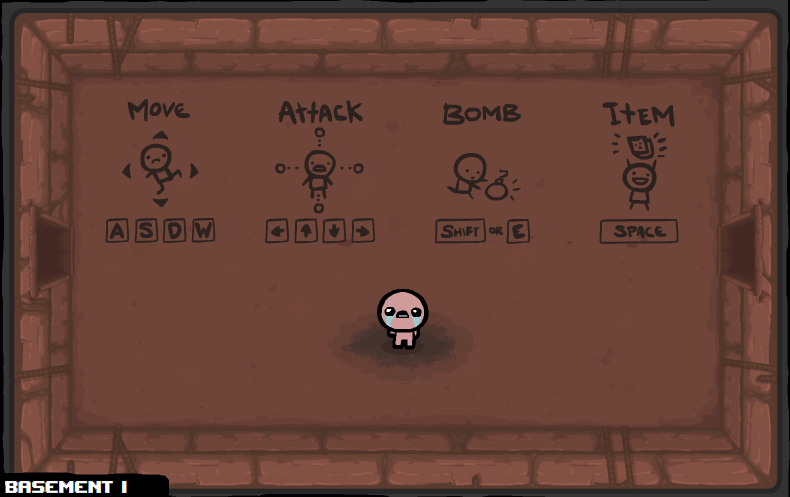 The control scheme of the original The Binding of Isaac

You move the leader using “ASDW”, the mob using the arrows and dash with the “Space” key. The only difference in our control scheme ended up being the keys bindings for the items. While Isaac has only two items (the bombs which you use pressing”E ” or “Shift” and the cards with the “Q”), we have three different items, so we decided to go with “Delete”, “End” and “Page Down” instead of “E” and “Q”. Those three keys are usually placed together, and they should be right next to your right hand (which will be most of the time over the arrows), that’s why we thought they would be a good choice.

As a side note/disclaimer, I feel inclined to point out that the game will have the option to set the key bindings in any way the player wants (you can already do that in the current build). But we want the default key setting to be best it can possibly be, that is why we are devoting time to find the perfect key setting.

Last but not least, scheme number 3 once again turns to the wisdom of PC twin stick shooters. Which is the control scheme of choice in 99% of those games? Mouse + keyboard! So we are giving that a shot. You move the leader with the keyboard (either ASDW or the arrow keys) and the mob using the mouse. You use items with the mouse buttons (left, right and middle mouse buttons), but you could easily swap the buttons for the keys from scheme 2 if you don’t believe in multiple mouse buttons.

It may be worth mentioning that this is not the first time we have tried using a mouse and keyboard combination. However, we never playtested it (I played for a little while and then dropped it because it felt odd), so now we are going to have a bunch of people play it and let them know how they felt, before making any decisions.

Now you know what we are going to be playtesting, but when? Who? How? Well, in a few days there will be a local games event called Meet the Game, where, as the name suggests, there will be people, there will be games, and they will meet. We are going to take that opportunity to use those people as guinea pigs and playtest the different control schemes. So, join us next time, when we will let you know how the playtesting session went out and which conclusions we reached!

Cool insight! Good to see this game coming along. Thanks for sharing.

o my such a good mod

I love the concept, doesn't ochlos mean angry mob too?