REDSHIFT's new feature is the MISSION framework - Random secondary goals that can be worth lots of points! Are you brave enough to complete them all?

REDSHIFT is a “roguelike shooter”, an original and modern take on the horizontal shooter genre with a 100% procedurally-generated environment. And now it has MISSIONS!

MISSIONS are the new feature implemented for REDSHIFT - Put it simply, they are achievement-style secondary goals that you can accomplish in a stage to get bonus points. Each complete mission will provide a factor which will be applied to your final score, so it's a very nice way to rack up lots of bonus points!

There are lots of different missions, they can tell you to achieve a certain combo (kill several anomalies in a row without being hit), destroy a boss layer without getting hit, or only with attacks of a certain color, among many, many other types of missions. The possibilities are limitless! 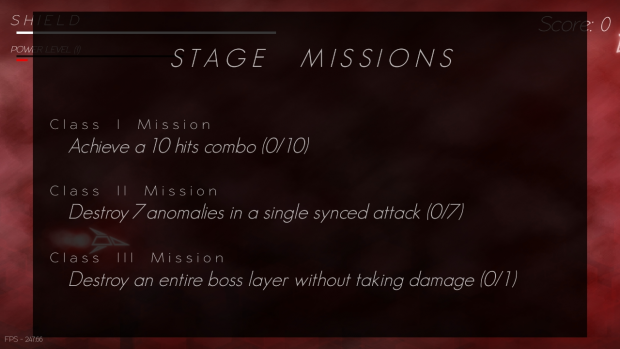 At the beginning of each stage, the player will receive 3 random missions which range from Class I (the easiest type of mission), Class II (medium-difficulty missions) and Class III (The hardest category missions, that can include boss missions). Currently there are 12 types of missions implemented in the alpha version (but more will be available at launch), which are: 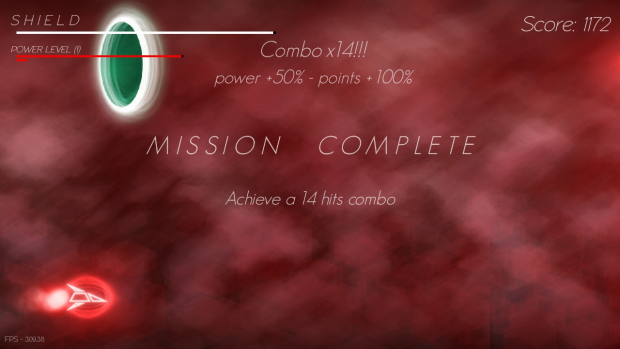 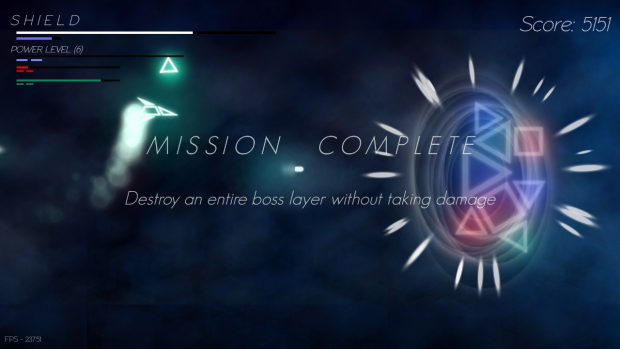 At the end of the stage, you'll receive a multiplier to your FINAL SCORE based on how many missions you completed - higher-class missions being worth bigger multipliers - so they offer a richer, deeper gameplay experience, giving the player more to do than simply leveling up to kill bosses (although that part alone can be loads of fun, hahah! ^^)

Nice, but what is that "Stage Score" you mentioned earlier?

Oh yeah, of course, this is also a new unveiling! Stage Score is calculated taking 3 factors into account:

Those 3 scores are added up and averaged and bonus is received regarding your maximum combo achieved in the stage, obtaining your OVERALL SCORE. That is a percentage factor that will be applied to your current score (shown in the upper right corner of the screen). Each mission completed will be ADDED to that factor, obtaining the final multiplier. On the picture below, the overall score provided a 48% bonus to the current score, but the completed missions added 90% more to that factor (that guy was VERY good, he completed all 3 missions!). That accounted for a 138% bonus to the current score, which provided the final score pictured. Hooray, an S rank! 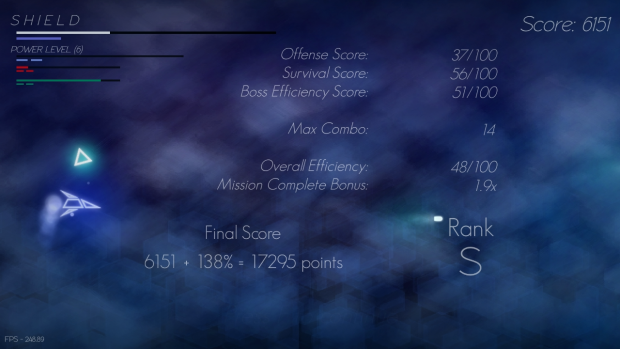 Anyhow, that's it for missions and Stage Score. Follow us for more updates, and the soon-to-be revealed Kickstarter and Greenlight Campaign! Also, please like and share us!