In October, I flew to Georgia to play the game I’m lusting over most in 2011: Red Orchestra 2. I spent a full day embedded in multiplayer with the folks at Tripwire Interactive, and I’m happy to claim openly that I think the 64-man WWII-’em-up will be a better, more modern multiplayer experience than anything else currently on or on its way to your PC. It’s generation-leaping stuff. Come read about it.

Standing 20 feet in the air, perched in a tree, Tripwire Interactive President John Gibson thinks of a new mechanic for sniper rifles in Red Orchestra 2: Heroes of Stalingrad. “I was deer hunting, and I was on a deer stand with a little spindly ladder to climb up to it. And a deer comes by about 10 feet away from the tree. I start hanging off the ladder on the edge of this platform, holding the gun in my left hand, and I’m trying to get this deer into the scope, and I can’t get the shot lined up. The deer runs away. I climb down from the tree, I look down at my sniper rifle and I’m like: ‘You idiot! This thing has iron sights on it.’ If I’d have just looked through the iron sights—it was 10 feet away—it would’ve been an easy shot. So, I’m standing there in the middle of this field, and thinking ‘We need to add that into RO2.’ Anything we can do that makes the game more realistic and easier to play is a big win.”Red Orchestra 2 is built on novel ideas, fueled by the independent spirit Gibson has instilled into his company (Tripwire released Killing Floor in 2009 and published The Ball in October) and the frame-of-mind that shooters should take advantage of what the PC platform can do, not simply be a higher-resolution, easier-to-control version of what’s available on consoles.“PC shooter fans have come to expect less than we have in the past,” says Gibson. “It’s kind of sad—there’re either no mod tools or all these strange restrictions. So, in a way, players have higher expectations for polish, but lower expectations for feature sets. They aren’t bad games—they’re not. All these games that are being developed right now are great achievements for a console, but they’re not pushing what’s possible on the PC.” 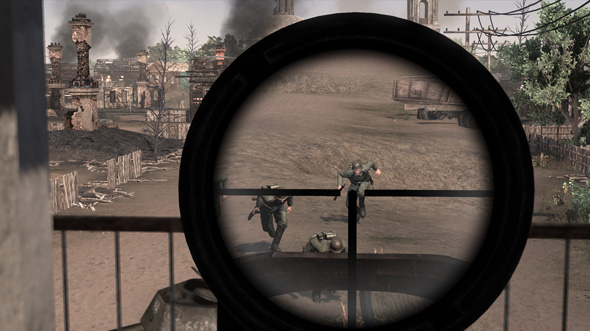 A single shot in RO2 produces more feedback and tension than some games' entire skirmishes.

Gibson is at the helm of a multiplayer-focused FPS that will implement realistically-modeled tanks, 64-player combat, GPU-taxing battlefields modeled foot-for-foot after Stalingrad’s most important skirmishes, ballistics modeling that’d make Newton proud and a functional first-person cover system that applies to almost the entire game world. These are brave nuances to build into a shooter. But they’re also arriving at a time when even the best multiplayer shooters on PC consider mouse and keyboard support or a server browser to be a feature worthy of being printed on the back of the box.

I don’t know how many bullets I have left. I’m sitting in Gibson’s chair at Tripwire’s office in Roswell, Georgia, an hour into our day-long multiplayer session. The entire Tripwire staff is playing with us—animators, level designers, and the QA team have piled in to populate multiplayer campaign mode—a 10-map mini-war where Axis (Germans) and Allies (Russians) attack and defend to capture and hold territory, or whittle down each other’s army count (your total deaths as a team is subtracted from an overall number—you’ll lose more if you’re on the attacking side). It’s like playing a Risk metagame between rounds, and the urgency of capturing a territory lends a great sense of importance to each round, even if you’ve played that map a dozen times.In cover behind some steel rails and debris, I check the magazine on my Russian SVT-40 semi-automatic rifle. There’s no on-screen counter for bullets; you hold the R key to swipe the clip from your weapon, and a message reports if the clip feels heavy or light. This might sound like realism for realism’s sake, but in practice, it simply means that reloading is a tactical decision. Gibson chimes in over my shoulder when I ask about the design.“You never know exactly how much ammo you have in your gun, so you end up having those ‘oh crap’ moments where you run around the corner to shoot at enemies, pull the trigger, and nothing happens. It gives the player a brief moment of panic.”The mechanic is in place, Gibson says, to generate tension. “Little moments of panic are the why we enjoy being scared by movies or amusement park rides. For too long I feel that multiplayer shooter designers have only been trying to give players joy. Now is the time to stop feeding FPS players only cotton candy, and give them some steak and potatoes along with the sweet stuff.” 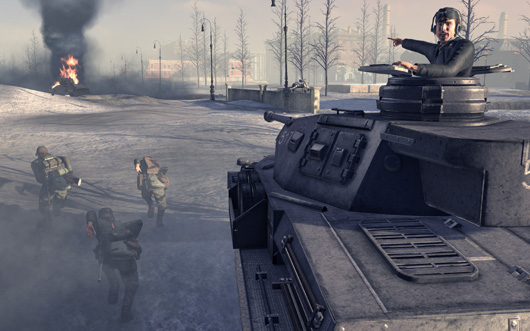 That approach—applying realistic-but-unintimidating touches to game mechanics—also applies to RO2’s other systems: you can take cover behind almost every surface in the game, but levels aren’t filled with convenient shoulder-high bits of concrete—a barrier might only cover your torso and neck from the enemy. Blind fire is actually blind—if you stick your gun over that pile of bricks to scare an enemy away, you won’t see what you’re firing at. Health never regenerates, but you can stop or slow bleeding over time by bandaging a wound. Machine guns aren’t simply faster-firing, heavier rifles: they can be deployed to any patch of earth, ledge or windowsill on the map to create a firing position.On that, operating a weapon in Red Orchestra 2 is the reason I was enthusiastically tethered to Gibson’s desk for an entire day. Without being too romantic about it: being pupil-deep in a sniper scope, the optics jar with every slide-pull of your bolt-action Mosin Nagant rifle, the black outline that vignettes your vision wavers within the scope, lightly disorienting. Few games have given me the feeling that I’m operating such active, mechanical weapons.

My best moment in multiplayer comes on Spartanovka, a sprawling farm map knuckled with hills and wrapped in dead grass. My team is approaching the last objective—a city hall building—after having captured a bombed-out church. I take a position behind a stone statue a few dozen meters outside the entrance, leaning around the left side of the column to provide cover fire while my comrades flood the front door.Germans are rounding the city hall perimeter in packs. And somehow, they don’t see me. I can’t put them down fast enough; I clip a kneecap, pop one in the stomach, and—squinting at the death animation—yep, I pinged one of their helmets. This single streak sells me on RO2’s gunplay: kills demand precision—bullets feel small, and leading moving bodies (accounting for bullet drop) makes firing easy, but hitting moderately hard.More subtly, I love the delay RO2 introduces between death notifications. It sounds absolutely simple: if you kill someone, a pop-up won’t appear until five or six seconds after they’ve expired. That gap in immediate feedback stirs drama—even when you’re sure you’ve tagged a German between the lungs, there’s a bit of breath-holding after every kill. You forget how much organic tension you’ve been missing out on when a bright “+10” isn’t stamped on the screen to pat you on the back every time you shoot someone.

That raw, scrappy-feeling gunplay strikes a compromise I’ve been waiting for for years: a nuanced multiplayer shooter that doesn’t place success at the top of its learning curve like an out-of-reach peanut butter jar. Every tint of realism feels purposefully ancillary—in the dozen-plus rounds I played, gunfights never hinged on how well I utilized cover—I could survive without it by crouching, leaning, crawling on my stomach or yelling at my squad leader to toss a smoke grenade to cover a flanking move. 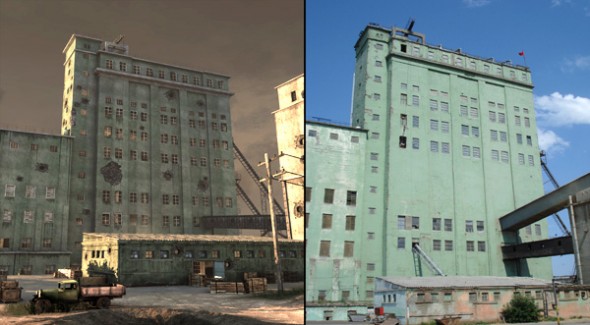 The dev team painstakingly rebuilt this grain silo as the centerpiece of my favorite level. During WWII, Germans initially ignored it, allowing the Soviets to reoccupy and turn it into a concrete fortress. The Axis spent five futile days trying to clear it.

And RO2’s spacious levels accommodate different approaches. On my favorite map, Grain Elevator, the Allies have to take back an eight-story facility floor-by-floor. My teammates were getting annihilated by enemy fire while jogging up the main stairway in the center of the structure, so I took a longer route: a fire escape that led the way to the top floor. From there, I was able to flank the enemy position.

Tripwire’s sensibility for accessible realism also applies to tank combat, which has matured since the first Red Orchestra. Gibson describes his team’s vehicle design philosophy: “In other games, you are the tank, right? The treads are essentially your legs. But in reality, there’s a lot more there that’s worth representing for the player.”Three of the four positions within the tank are playable (driver, gunner and commander). The loader is occupied by AI. Commanders spot and designate targets, drivers watch the road, gunners gun, but you’re never flipping obscure switches—the most complex that things get, input-wise, is dialing-in the range of your cannon. And that’s actually gratifying: in one tank slugfest, my opponent and I were lobbing off-target shells back and forth over an open sheet of tundra, trying to estimate the range to center our scope on. It was wonderfully anxious—the delay between reloading, ranging and firing forms an uneasy gap where you’re not sure who will strike first. After launch, Tripwire will add more vehicles: the German SdKfz 251/1 half-track personnel carrier and Panzer III J tank, as well as the Russian Universal Carrier and T-70 light tank. 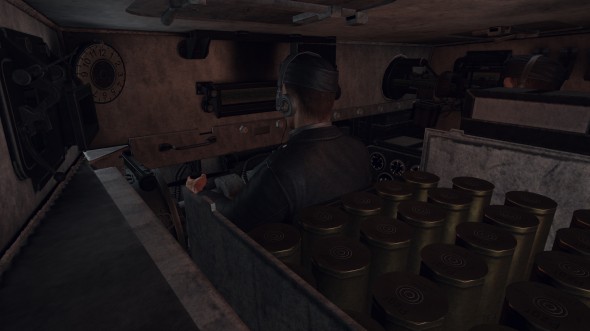 Are we there yet? Driving a Panzer isn't lever-pulling drudgery: WASD comfortably moves the vehicle. To the driver's left, a mechanical clock dial tracks the turret's relative position.

Knowing that these intricate parts exist within a tank mirrors the fun I have when downing humans in RO2. More than 10 separately-housed systems can be picked apart. In my final tank fight, I’d lost my engine, but my enemy hadn’t bothered to finish me. Immobilized, I swapped to the gunner seat (transitioned by a Mirror’s Edge-style crouch-crawl through the cockpit in first-person), shoved my dead crewmate aside, and scrounged a kill on the turret.It’s a novel feeling that I loved: thinking that you’re not just firing at a box of generalized hitpoints, but vehicles with “organs.” Potting a shot in an enemy’s hull stirs a wave of thoughts and anxieties: did I penetrate? Did I trigger an engine fire? Should my follow-up shot punch the same armor block, or target a different system? I’ve never put serious time into a tank simulator, but I catch myself thinking about the trajectory of rounds, armor thickness and which face of the tank I should expose to an enemy’s cannon to protect a certain crew member.

Out of the trenches

That sense of output—of a single shot affecting other players in a way that’s more complex and interesting than reducing a health bar—makes the vehicle combat in games like Battlefield: Bad Company 2 feel like rock-paper-scissors on wheels. Red Orchestra 2’s systems honor your ideas as a player without feeling either necessary for survival or hopelessly out of reach. All that happy math of bullet penetration and ballistics is noticeable, but you don’t have to care about the calculus to dismantle a Russian lieutenant from 200 meters.Less isn’t always more—a first-person cover system, believable recoil, unapologetically huge maps, and being able to vault over almost anything are all ways of letting players express themselves. More importantly, these strides toward realism rarely felt at the expense of playability. It’s delightfully counter-intuitive that the real innovation in first-person shooters isn’t coming from the modern battlefields of 2011 and beyond, but from those of 1942.

Read this months ago ;)

But yeah, is a very nice article.