Hello all. Moctezumagames is proud to announce the development of Red Gun, a first-person rail shooter for iPhone and iPod Touch.

Red Gun for iPhone and iPod Touch is a shooter on rails that places you in the Wild West during the Gold Rush. You are Red Stanton, know as Red Gun, and your mission will be to clean Bucksin, an empty town now crowded of outlaws.

Red Gun gets inspiration from the kings of the genere, such as Time Crisis (avaiable for iPhone as well) or Virtua Cop. But you will find in Red Gun many improvements (during the game you can crouch to avoid enemy bullets and to reload, just touching the screen), getting from Apple devices the best they can bring, using Unity engine. 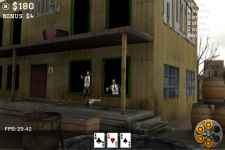 Looks good! Reminds me of an old western shooter of which I cant recall the name.

I know the one you're referring to, it was an Arcade game. FMVs played and you shot at the screen. Can't remember the name though.

"my bullets will soon scream in the desert" sounds good