An introduction to two more interactive machines for dealing with used parts.

At a recycling unit you can insert parts from your inventory to be broken down into reusable matter, so they're basically an additional way to get access to matter besides attempting to blow up robots with as little collateral damage as possible (remember that explosive-happy Cogminds will not leave much in the way of usable salvage, though they'll need a lot of it to supply their weapons with ammunition).

Recycling a part is instantaneous, but the matter produced is contained within the the machine itself until you hack it to retrieve its contents. On retrieval the matter goes to your storage, or is placed on the ground if you have insufficient capacity. 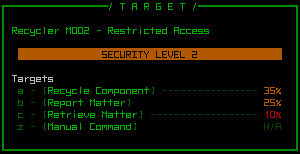 The basic recycling unit interface. (A note about percentages: While formulas exist for calculating them, all hacking values are untested and will require tweaking for balance.)

Now that we have recycling units, recycler bots finally have somewhere to take their stuff! They used to just wander around once their inventory was full--now they'll take it all to the nearest recycling unit for processing. After a given recycling the unit reaches a certain matter quota (dependent on its size), it will all be transferred away for use elsewhere, so you'll want to retrieve it before that happens.

It used to be that after cleaning up a battle site recyclers essentially became haulers wandering around until you decided you wanted whatever they might be carrying. Now you'll have to catch them before they make it to the recycling unit! It's always fun to be in a pitched battle with combat bots and see a group of recyclers descend on the area and start hauling off your loot before you can get to it. (Personally I tend to pick up important parts even in the middle of battle if near enough.)

While there are a lot of parts out there to re-build yourself with, you may have a specific few that you just can't do without, usually because they're key to your style of play and/or difficult to find.

That's where repair stations come in.

To repair a part, select one from your inventory to scan it for damage, then initiate the repair process. Repairing restores a part's integrity, as well as shorted circuits or other common causes of malfunction. Repair stations cannot repair faulty prototypes or deteriorating parts, nor can they repair Cogmind's core (only evolution restores core integrity).

Like fabrication, repairing also requires time to complete, so you'll have to risk hanging around the machine, or come back later to pick up the repaired item on completion.